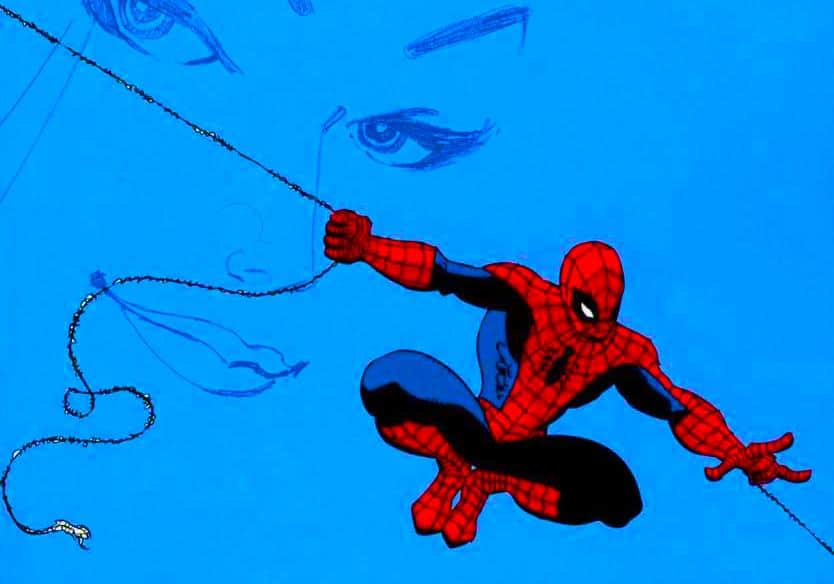 In 2002, Jeph Loeb and Tim Sale teamed up once again to create Spider-Man: Blue and tell the other side of the story: one that dealt with Gwen Stacy, who she was, and the regret that Peter Parker feels every day that he never got to be with her properly.

Right off the bat, it has to be said that this six-part story isn’t about Spider-Man, although it does feature him in lots of web-slinging action; instead, it’s about Gwen, Peter, love and regret.

In Spider-Man: Blue, it’s now been 40 years in the real world since the death of Gwen Stacy.

I first read that Spider-Man: Blue story when I was a kid, just a couple of years after it happened. It was contained in a hardcover Spider-Man annual that I had been given for Christmas, and while I barely knew the character I knew enough to get how big a deal it was.

It was beautifully drawn and the story had so much emotional impact that I felt Peter Parker’s loss. I understood his anger at both the Green Goblin and himself, his frustration, his guilt.

What I didn’t understand was that I was reading one of the biggest moments in Marvel (and comic book) history. 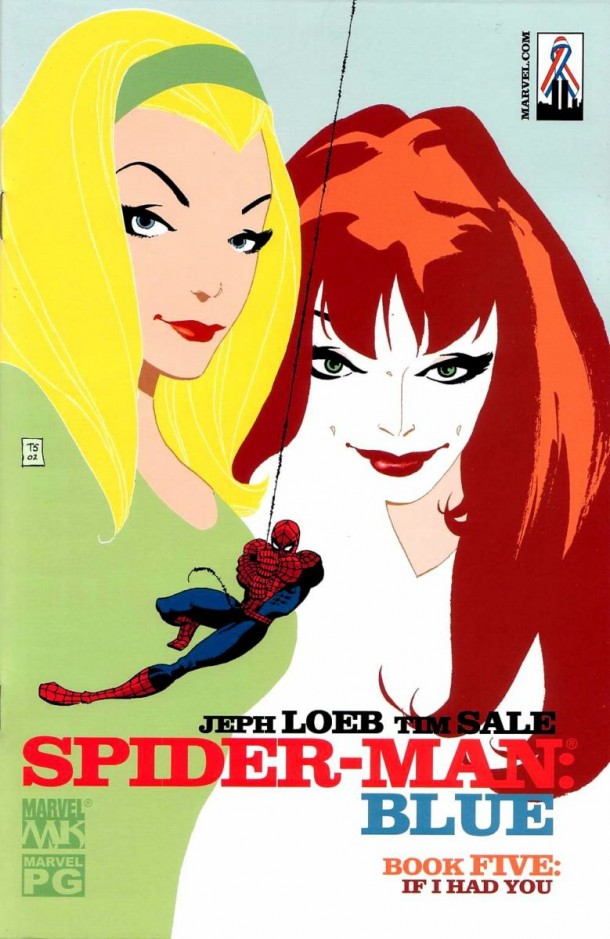 It’s Valentine’s Day, and Spider-Man leaves a rose on top of the George Washington Bridge in memory of Gwen Stacy. It’s where she fell from and where she died as he tried to catch her with tragic results. As Peter Parker narrates the story of how they almost didn’t fall in love.

He casts his memories back to early fights against the Green Goblin and how he caught the eye of Gwen even though she was hanging out with school jock Flash Thompson and rich kid Harry Osborn. A rampage by The Rhino isn’t that big of a problem to his blossoming relationship with her, but the arrival of Mary Jane Watson is. 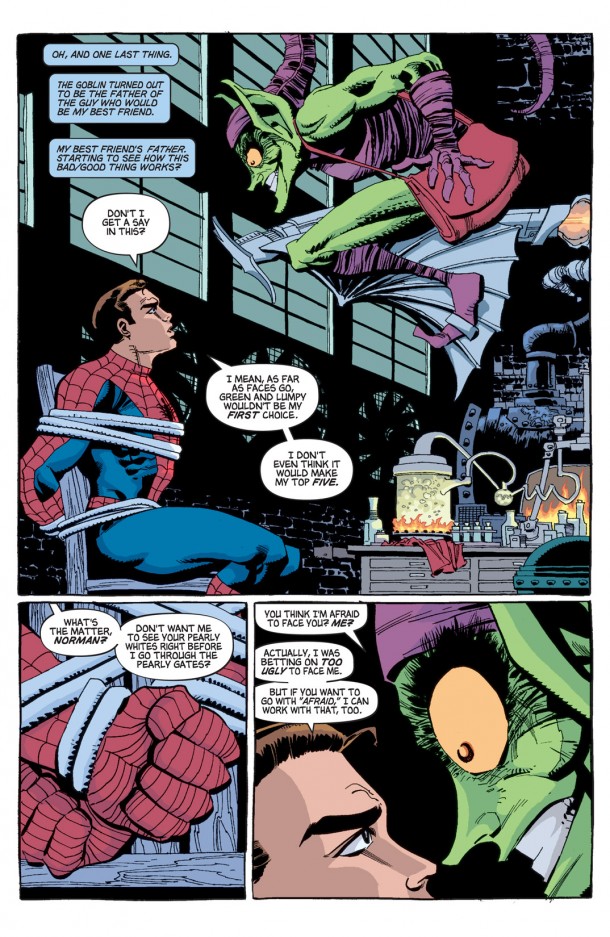 Mary Jane causes a stir wherever she goes and flirts with Flash and Harry, but it’s Peter who she’s friends with. That friendship causes a strain on his relationship with Gwen and it’s pretty obvious to everyone except Peter that a love triangle has developed. When he becomes injured fighting against two villains claiming the title of The Vulture and both Gwen and Mary Jane pay him a visit, the situation gets awkward.

Remembering a battle with Kraven and how afterwards Gwen Stacy finally took the initiative and confessed her feelings for him, Peter admits that she’s the one who had him. Despite all of the times he’d been too busy as Spider-Man to pay her the attention she deserved, she was the one he loved. His memories drawing to a close, we learn that he’s been recording his story on an old cassette player in the attic of the house he shares with Mary Jane, now his wife. It’s not a betrayal, and Mary Jane accepts that Gwen Stacy is one memory that he’ll never be able to forget.

It’s easy to say that Spider-Man: Blue‘s art is stunning.

It’s Tim Sale, and that should be enough for anyone.

His style is reminiscent of Steve Ditko and John Romita Sr., which makes what’s essentially a flashback story so touching. It resembles the comics of the time but is still original.

Spider-Man looks fantastic, Mary Jane looks sexy, and Gwen… I’ll confess to having a soft spot for her character anyway, and it’s never been about anything other than how she’s the girl-next-door that a guy could fall in love with. Sale captures this perfectly. 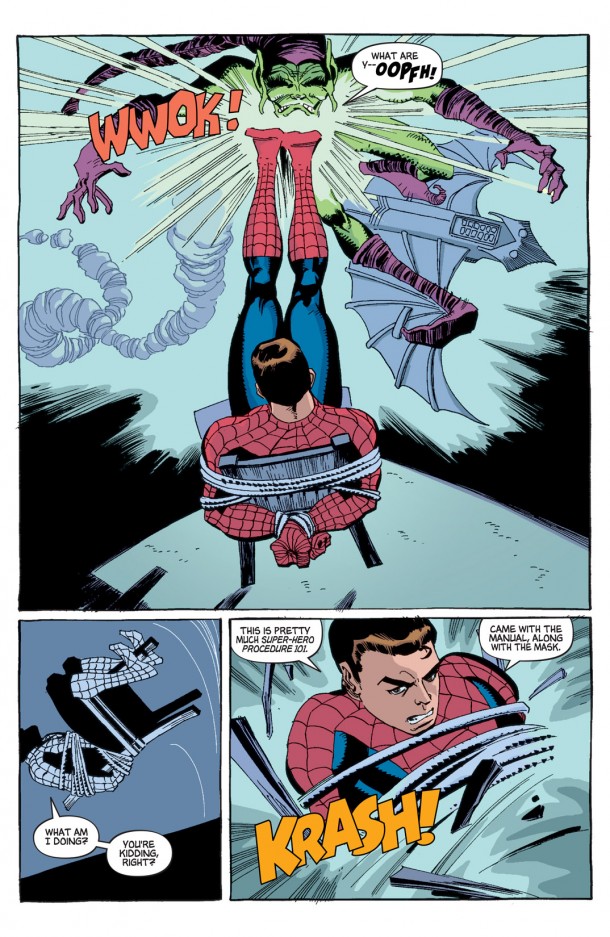 Spider-Man: Blue‘s story may seem a little flat to those who just want a regular Spider-Man story but, as a delicate tale of romance and loss, it’s well-paced and heartfelt.

Spider-Man: Blue balances action and drama carefully, with one never outdoing the other. We can totally understand Peter’s little victories like Gwen riding with him on his motorbike, and every character is revealed to be more than the stereotypes we’ve accepted over the years. Then there’s the real shocker: for all of the subtle reminders of the tragic loss of Gwen, it’s never actually shown. The restraint on that is a gamble, but one that pays dividends. The fans know it only too well, to replay it would have been heavy-handed and Jeph Loeb reveals his ability as a master storyteller by avoiding it.

Spider-Man: Blue may not be for everyone. It’s a retelling of highlights of his past adventures and so it offers nothing new in the way of wallcrawler action. What it offers instead is a love story and a touching one at that.

It may not be for mature readers, but it’s a mature subject and stands alongside Marvels as one of the best-limited series that Marvel Comics has ever released.