Why Him? Review – James Franco and Bryan Cranston Face Off Strait-laced Cranston meets his daughter’s socially awkward Silicon Valley billionaire boyfriend, Franco, in this surprisingly enjoyable raunchy Christmas comedy. While the goofy Why Him? might be getting awful reviews, it is still big on laughs and delivers a heartwarming moral in the end. It’s a step up from ‘Office Christmas Party’. [dropcap]D[/dropcap]epending on just how much Franco you’re able to withstand, once you get past the strong language and boisterous behaviour, you’ll find that Why Him? follows in the same spirit as films like ‘Meet The Parents’ and ‘Guess Who’. Except, this time it flips the story on its head and makes the father the fish out of water. What follows is a film filled with spontaneous humour and a juxtaposition between the older and younger generations.

Cranston plays Ned, an overprotective but loving father and the CEO of a printing company who brings the family along to spend Christmas time with his daughter, Stephanie (Zoey Deutch) and meet her new boyfriend, Laird (James Franco). From the get-go things are awkward. Laird is Ned’s worst nightmare: eccentric, priapic, potty-mouthed, wildly inappropriate, and has absolutely no filter. Things take an even worse turn when Laird prepares to ask for his daughter’s hand in marriage. Why Him? is exactly what you think it is. There are no surprises. However, that’s not necessarily a bad thing. Audiences aren’t going into this film expecting an Oscar-winning drama. It’s a fun film and it delivers on all the audience’s expectations. Director and co-writer John Hamburg is well-versed in the comic possibilities of the first encounter. After all, he was responsible for writing both ‘Meet The Parents’ and ‘Meet The Fockers’.

The cast ensemble here is excellent. Franco, Cranston, Keegan-Michael Key, Megan Mullally and Cedric the Entertainer have great comedic timing and work well off each other. However, a lengthy finale and a few misfires along the way might frustrate certain audiences.

Why Him? is crudely hilarious and hilariously crude. It’s not for everybody, but it sets out to do what it promises – and that is not something you can say for many comedies in 2016. 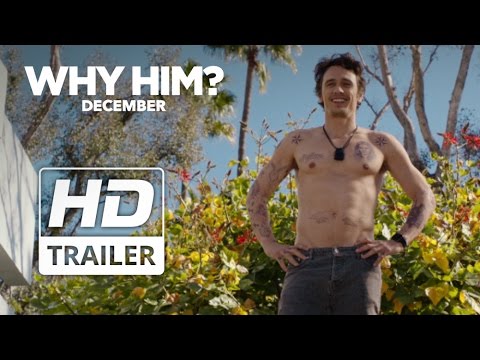