Home > Movies > Return To The Batcave: The Misadventures Of Adam & Burt Review

Return To The Batcave: The Misadventures Of Adam & Burt Review 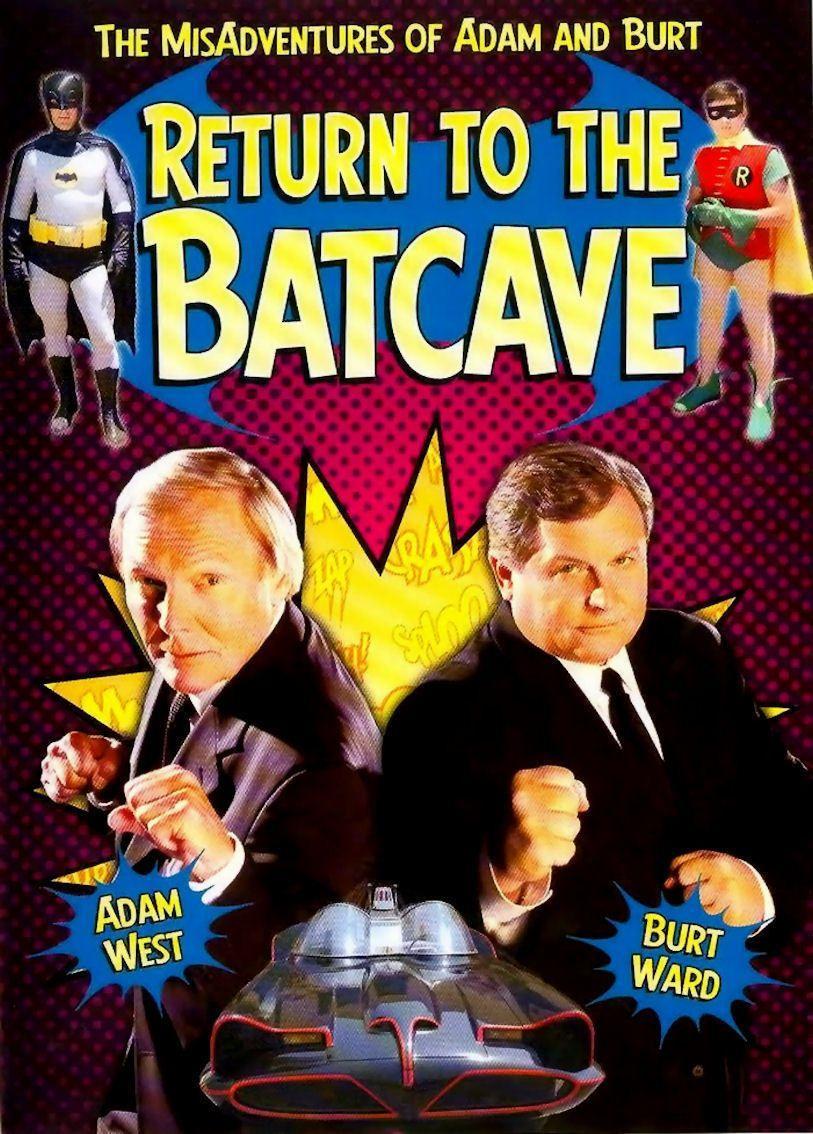 Later this year sees the first time that the entire classic ’60s Batman TV series becomes available to the public on DVD. For those who thrilled to the camp exploits of Adam West as Batman and Burt Ward as Robin, it’s almost 50 years overdue. It’s also fitting since Batman turns 75 this year, so what better way to celebrate than with some BIFF-KAPOW! excitement? We review Return To The Batcave: The Misadventures Of Adam & Burt. 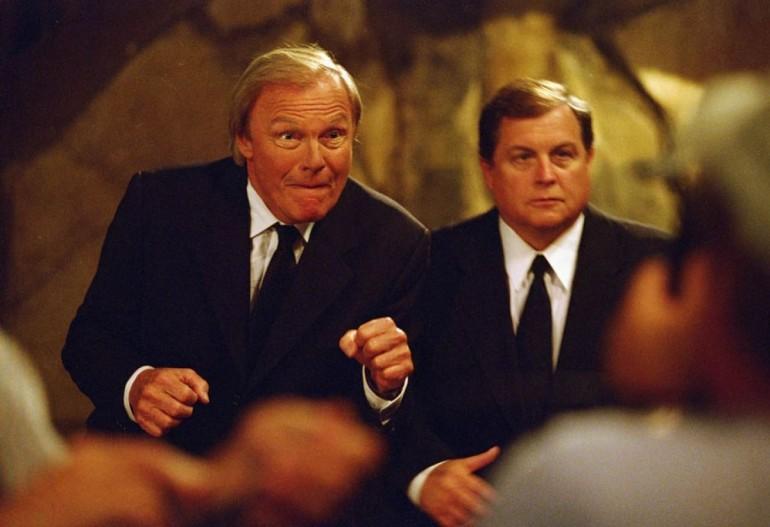 Up until now, the only way to catch the ’60s adventures was on YouTube and with the Batman ’66 film, and more recently with the Batman ’66 comic book series. Tales abound that the antics behind the scenes were as madcap as the show being filmed at the time, and those stories aren’t exaggerations. West and Ward have many stories to share with the fans, and if you get the chance you should read their books or listen to the commentary on that ’66 film.

Or, if you need help visualising it all, maybe watch Return To The Batcave: The Misadventures Of Adam & Burt. 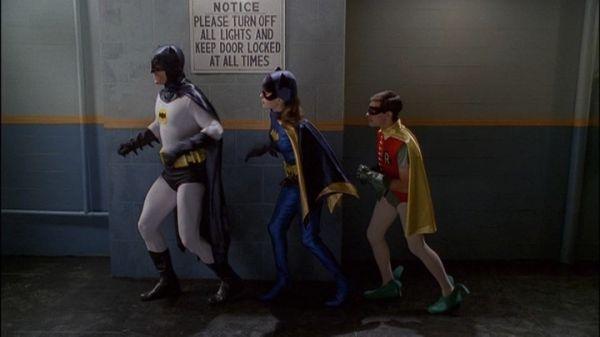 The plot of Return To The Batcave: The Misadventures Of Adam & Burt is fittingly ridiculous: An ageing Adam West is relaxing at home watching Batman when he gets an invitation to attend a charity function where the old TV Batmobile is on display. He slides down the Batpole in his home and races off, only to meet up with his friend and co-star Burt Ward. They don’t have much time to reminisce though, because the Batmobile gets stolen and it’s up to Adam and Burt to follow the cunning clues that have been left for them. This requires them to think back on the old show and their lives, wonderfully played out in the flashbacks by Jack Brewer and Jason Marsdon.

It turns out that while a young Adam was working with a chimp on the El Kini Popo show and Burt was a real estate agent, they never dreamed they would be catapulted to overnight stardom. But after auditioning for Batman, their lives changed quickly. Adam West had spent enough time in TV and movies to know what he was doing, and instantly had his own take on how to play the role and do the Batusi. Burt Ward was an athletic and intellectual prodigy, but his lack of experience was a problem. Yet as a duo they were dynamic! 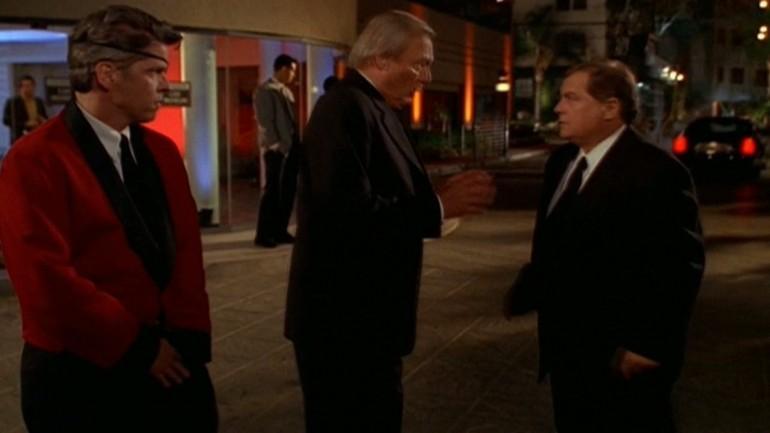 Of course, it wasn’t all fun and games. Adam sneakily found ways to get more screen time and had to get out of rumours of Batman and Robin being gay. Burt Ward had to deal with his marriage falling apart, the constant barrage of physical abuse his body took in the role and the lengths the studio went to in order to get rid of the bulge in his tights. And, according to this, a vile villain was already planning some dastardly deeds to steal the Batmobile and the show…

Back in the “real” world of the present, West and Ward battle henchmen in a classic fashion (complete with sound effect captions and skewed camera angles like the old show) and figure out riddles just as dopey as the ones they used to solve while in costume on TV. Throw in lots of occurrences of breaking the fourth wall, a familiar-sounding voice-over announcer narrating every cliffhanger and cameos by Catwomen Julie Newmar and Lee Meriweather, along with Riddler actor Frank Gorshin and you’ve got a silly but strangely informative movie. 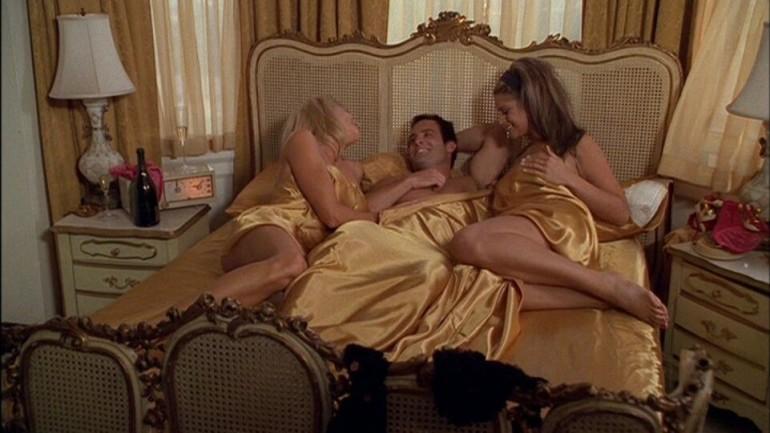 So what you’ve got here is a sort of biographical movie and an excuse for it to exist. The flashback sequences are wonderful, though, and it’s great to see the old Batmobile, Batcave and costumes on display. It’s a revealing look at how things went down on that show, from the issues of the stars and guest stars to the success and cancellation of the show.

But… If you’re not a fan of the old show, chunks of it are pointless (if not the whole thing). Even if you’re into the hammy acting and cheesy plot, this recipe may still be hard to swallow. That being said, Return To The Batcave: The Misadventures Of Adam & Burt is entertaining enough and serves as a good reminder that there are real people behind our caped crusaders on a regular basis and that Adam & Burt have been through some amazing adventures. 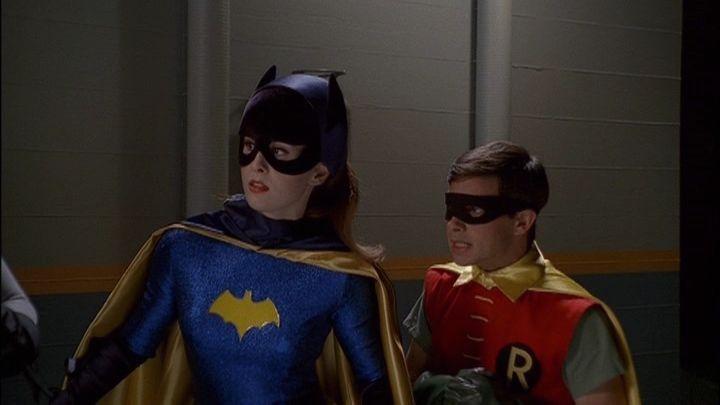 There are flaws: the recurring funked-up version of the old Batman tune is decent but not a patch on the original; any film footage shown from the good old days is strictly from the ’66 film because the filmmakers (like us until this year) couldn’t legally get their hands on the original episodes. Adam and Burt make a meal of every moment on screen, and while there’s still the same chemistry they’re a bit past their prime. The same goes for Gorshin, Meriweather and Newmar, who’ve all aged well but aren’t at their best. Still, those bio-pic flashback segments are fascinating, accurate (according to West & Ward, and nobody’s ever contradicted them) and can fill the fans with a sense of nostalgia as the look and feel of the original show are replicated perfectly.

This may not be that old show or the movie they did, but that’s fine. It’s a good way to spend 90 minutes and has far more charm and humour than any of the behind-the-scenes shows made about the more recent Batman movies.