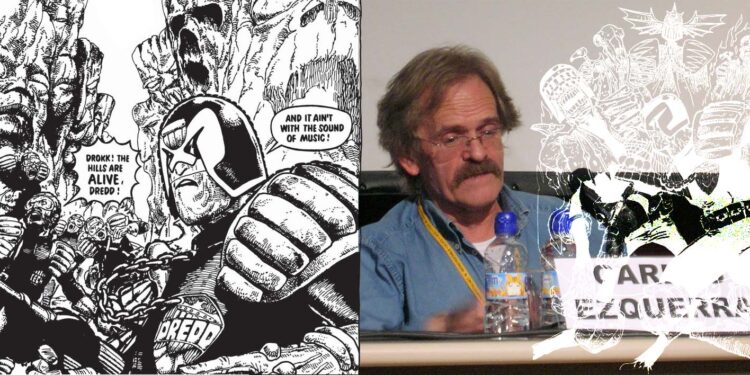 “Although there are many artists who have followed in Carlos’s footsteps, they’re still drawing on Carlos Ezquerra …” – Pat Mills, Future Shock: The Story Of 2000AD

I’ll never forget the first Judge Dredd story I ever read, even though it was nearly four decades ago. Dredd was his usual intense self, chasing down a wanted perp through a massive futuristic city. It was an adrenaline-charged scene that flowed as smoothly as if it were a movie I was watching. I may not have known who Dredd was, but he was exciting and visually there was something about it that just worked.

The writing was good, but a larger part of it was down to the work of Spanish artist Carlos Ezquerra – the co-creator of Judge Dredd and Strontium Dog, who has died at the age of 70. Starting his artistic career in Barcelona, he worked on various girls’ romance titles and westerns before moving on to the UK’s Battle, working with other future 2000AD creators. Many of those fellow creators and others have paid tribute to him, remembering him for his enormous contribution to comic books, his warmth, and his dark sense of humour.

While Carlos Ezquerra may not have drawn the first Judge Dredd story in 2000AD, his character design work was instrumental in giving the futuristic lawman many aspects of his signature look – inspired in part by the image of Frankenstein from Death Race 2000. Beyond that, his ability to create a sprawling metropolis from his imagination allowed the world of Mega-City One to take shape. He envisioned a world of skyscrapers blooming like mushrooms… although would wryly point out that they looked too phallic for some readers, and described Dredd on several occasions as being a tax collector rather than a fascist.

It wasn’t long though before he was back and drawing the Judge Dredd series on a regular basis with a rotation of other artists, and for many Carlos Ezquerra was the greatest. His 25-part run on “The Apocalypse War” storyline is still one of the title’s highest points. While his art style evolved over the years, he was also known for his consistency and attention to detail. His drawings could convey both heightened tension and the flowing pace of action sequences like few others, granting his work the feel of a Spaghetti Western at times. He was a storyteller in his own right, with an almost instinctual gift for creating the most dynamic of scenes which would electrify the readers.

Shortly after the creation of Judge Dredd, Carlos Ezquerra and fellow Dredd co-creator John Wagner brought the title of Strontium Dog to life for another comic, Starlord – later to become a part of 2000AD. Strontium Dog, a science fiction tale with a western vibe, focused on Mutant bounty hunters and the title’s main hero Johnny Alpha. While Carlos Ezquerra claimed to never have a favourite character other than the next one he would work on, he admitted to having a natural soft spot for Alpha over Dredd because of how humane the character is.

Bringing his signature style to the character, Carlos Ezquerra imbued the broken-nosed, cunning and hard-hitting Alpha with an equal measure of sadness. Over the following ten years he was one of the title’s few artists, but disagreed with a storyline decision to kill off the legendary character – reportedly refusing to draw Alpha’s death in “The Final Solution”. However, he would later return to the title and claimed that for him Alpha’s death never existed.

His incredible tenure at 2000AD also included Fiends of the Eastern Front, Al’s Baby, ABC Warriors, Durham Red and more. Beyond that, he also worked for DC on titles like Hitman and Preacher, as well as drawing Boba Fett and Mara Jade for Dark Horse’s Star Wars series. To many fans though, it is his work on co-creating and drawing Judge Dredd and Strontium Dog that he will be most remembered for.

On a personal note, his wonderful work throughout the years has entertained and inspired me; on behalf of Fortress of Solitude, our thoughts and condolences go out to Carlos Ezquerra’s wife and family.