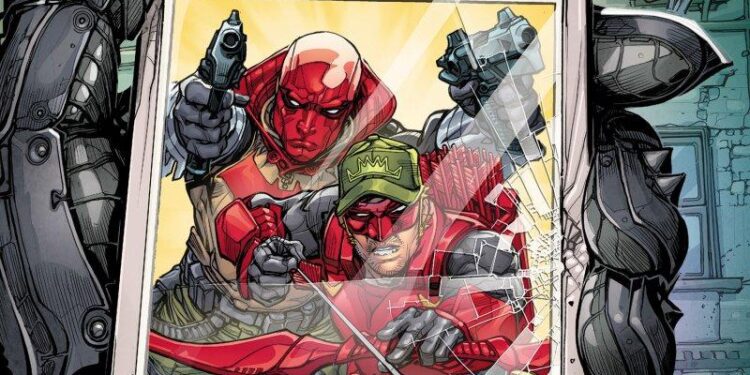 With so many of DC’s current titles taking a darker tone, it’s refreshing to find a book that isn’t afraid to inject a little bit of humour and fun into its characters. Red Hood/Arsenal #3 explores Jason Todd and Roy Harper’s freelancers-for-hire venture and continues to build on the whole buddy-cop-without-being-a-cop nature of the series. After infuriating Tara Battleworth by spreading their wings and creating a marketing campaign for their hired services (‘Rent-a-bat’), Jason and Roy are fired by Tara. Subsequently, they accept a job from a blobby criminal known as Underbelly, who seems to think he’s superior to the Joker, Lex Luthor and every other villain around. Is he for real? Can Jason and Roy contain their laughter? Stay tuned for the next episode of Dragon Ball Z!

On a serious note, anyone who has ever been a freelancer will howl at the absurd issues that Jason and Roy encounter – from clients who think they’re top-dogs to blowing marketing budgets in a heartbeat. However, the heart of the story is that it shows Jason and Roy for what they truly are: flawed heroes with the best of intentions. They’re hustlers who may not be the straightest arrows (pardon the pun) in the hero world, but they’re still heroes.

The chemistry between the characters is incredible. While Roy might be the goofier of the two, Jason isn’t a brooding Bruce (see what I did there?); therefore, ensuring that the dialogue remains sharp and witty throughout. In addition, the strength of their friendship, which was already explored in Red Hood and the Outlaws, is solidified as we see that they are equal partners – no Batman and Robin dynamic here.

The artwork is gorgeous, the story is hilarious and the characters are genuinely likeable and relatable. If you haven’t picked up Red Hood/Arsenal yet, you are missing out on an extraordinary title that is a whole lot better than the current Bruce Wayne clone saga happening over in another book.