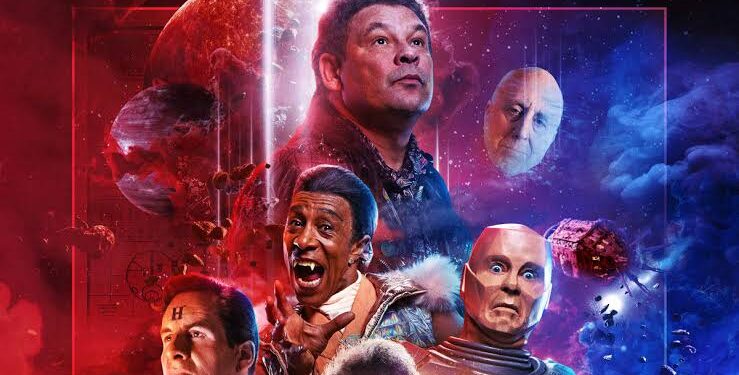 3 million years ago, Dave Lister was cryogenically frozen aboard the interstellar mining ship Red Dwarf. Guilty of smuggling a pregnant pet cat aboard ship, his punishment ironically saved him from the radiation leak which killed the ship’s crew, while his cat survived by being sealed in the ship’s hold. When Lister was finally released from stasis, he learned that he had become a messianic figure to the race of felis sapiens that had evolved over the ages. But until now, his only companions have been the hologram Arnold Rimmer, mechanoid Kryten and The Cat – the sole evolved cat aboard Red Dwarf.

Now, Red Dwarf receives an urgent SOS call from three cat clerics who are being hunted down by Rodon, the tyrannical leader of the Cat Space Fleet. Following a misunderstanding in which Red Dwarf turns against its own crew, Lister attempts to help his misguided followers and clear up the confusion of his religious identity. Meanwhile, Rimmer tangles with the complex issue of his own existence as time runs out… 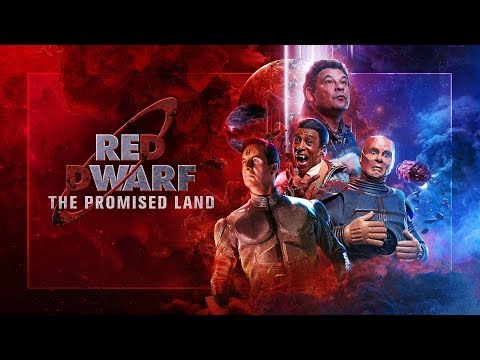 It’s been 32 years now since sci-fi comedy series Red Dwarf first appeared on TV, and this new film is technically its thirteenth season. Often irreverent, sometimes philosophical, and skipping between being amusing and hilarious, Red Dwarf has managed to sidestep being in the shadow of the legendary Hitchhiker’s Guide To The Galaxy and stands firmly as its own unique creation. Ignoring limitations of low budgets, staggered seasons, flimsy sets and props and rushed shooting schedules, the boys from the Dwarf have managed to keep on trucking.

The Promised Land returns fans to a long-forgotten (and mostly ignored) plotline from the show’s earliest seasons about Lister being viewed as God by the race of humanoid cats he indirectly helped “create”. Naturally, Red Dwarf’s resident cat, Cat, never quite believed him anyway, although Lister still tried to explain how this miraculous misconception happened in the first place. However, there have been times when Lister’s supposed divinity have come in to play, forcing him to briefly live up to those expectations just to help out. In this story, things finally come full circle as he meets the actual Cat race. Sadly, the Cats themselves are a bit of a disappointment as characters, and their religious war never quite gets off the ground as a storyline. Rodon’s quest for power is shallow and vague, while the persecuted clerics are bland, dim-witted zealots. Many of the Cat traits of years ago have been either been ignored or reduced to the occasional visual gag (using giant cat-flaps as doors and being easily distracted by laser-pointers, for example). There’s a tacked-on additional sub-plot which involves a mystical stone too, but that comes out of nowhere and is a deus ex machina the story didn’t need.

For all that, there are still some interesting philosophical debates at play regarding faith, religion and identity. While nowhere near as smart or well-presented as Life of Brian, it’s still good seeing Lister finally come to grips with being a figure of worship – a responsibility he neither wants nor can live up to. As for Cat, unfortunately he gets lost in the mix and more screen time should have been devoted to his own experience too, as somebody with a stake in both sides of the argument.

Then there’s Rimmer and his impending doom. When the Dwarfers locate a backup disc for Red Dwarf’s AI system – the much-beloved (but usually bonkers) Holly – it triggers a brilliant sub-plot which propels much of this adventure… and a countdown clock on the impending death of everyone’s not-favourite hologram Rimmer. There are plenty of gags here which are Red Dwarf at its best, as well as some of the most touching moments of the entire series. Rimmer, gradually reduced to a black-and-white version of his usual colourful self, complete with tinny mono-audio sound, lingers on life support as he considers pulling his charging port plug for good. As usual, none of this would gel without the ever-reliable and pedantic mechanoid Kryten, whose mere presence makes C-3PO look like a Hell’s Angel. Delivering straight lines throughout with a sense of perfect comedic timing, and with his head looking like a freak formation of mashed potato as always, he’s slightly in the background here but conveys more impact because of it and makes the most of every moment.

Unfortunately for fans, The Promised Land doesn’t quite recapture the magic of the show at its best while the movie format exposes some of its biggest problems. The primary storyline may have sustained an individual episode easily, and there’s enough material here for a series in parts, but the writing isn’t strong enough for it to be stretched out in one go; likewise, when a joke doesn’t quite land things fall apart, and some running gags like the cat-flap become painful. With a (canned?) audience laughing at even things that aren’t funny, it’s trying to force the material to seem more amusing than it is.

Still, any Red Dwarf is arguably better than none. For all The Promised Land’s faults there’s some real greatness still to be mined by the great rouge one. It’s a decent effort, full of humour and some surprisingly good effects, while the lead actors can still raise a laugh. It may not quite be enough to lift the spirits of long-time fans at this rough time, but it’s still a far better franchise return than Picard. Just remember Space Corps Directive 34124, and you’ll be fine!

This may not be the Cat’s whiskers, but it’s still pretty good.