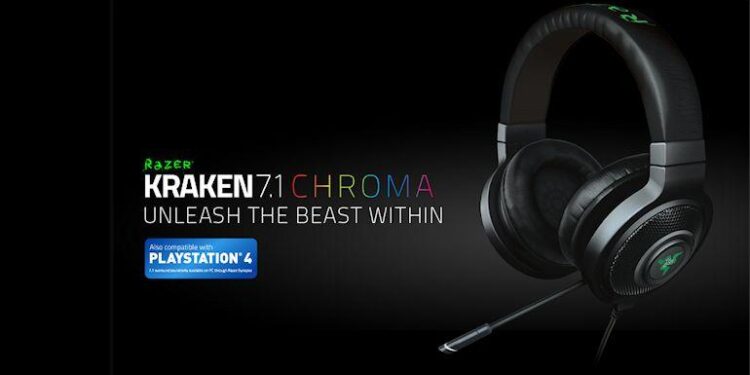 As with the previous two devices, the Kraken is also built from a previous headset, with the most evident of additions being the inclusion of the LED lighting display. Unlike the others in the Chroma range, however, the Kraken 7.1 Chroma is the eighth Kraken headset on Razer’s catalogue. It is the second from the Kraken range to offer, as its name suggests, 7.1 surround sound audio. The Kraken 7.1 Chroma looks very similar to the Kraken Neon Pro, previously reviewed on FoS, as well as the remaining six Kraken headsets in the range. Despite the looks derived from previous headsets, it’s still a good design while being fairly simple in carrying out its task of a providing comfort and portability for gamers. Unlike many other headsets that may require both audio jacks and USB, the 7.1 Chroma makes use of just one USB input with a mesh cable.

The headband and ear cups are has a leather-like material finish, providing extra comfort over long periods of time. My ears mostly fit within the 45mm diameter hole, which made it quite comfortable even after two hours of use. Using the headset for longer than this does tend to irritate the ears, and will be even more prominent for users with even slightly larger ears. Users are able to stretch the headband while the cups tilt both up/down and left/right, adjusting to the shape of your head. The ear cups do provide a slight level of soundproofing, although you’ll still pick up a few faint noises here and there when there’s no sound from the speakers, but nothing during actual playback.

As stated, the Chroma headset delivers great portability with its foldable ear cups to reduce space required during transport. Coupled with the light, 340g of weight, the Chroma is deserving of its claimed portability function. A retractable mic is located on the left cup, which folds away completely out of site. The mic itself is about 12-15cm long while still being bendable. In addition, the mic has its own mute button fitted to it, which makes things very convenient. Unfortunately, locating this button without looking down at the mic is a little tricky, and most users will choose the push-to-talk options within games as opposed to manually doing this on the device itself. The mic does have a light of its own to indicate when it’s live. Once again, as with most, if not all, Razer products, the default settings on the Kraken 7.1 Chroma works quite well with sound equalisation setup for deep bass and clear sound. The Synapse software, though, seems more of a must-have over the BlackWidow or DeathAdder with the surround sound requiring the software to activate. In addition, the number of sound and microphone options available via the software makes it essential. To set up the surround sound feature, the software provides a directional sound setup that allows users to adjust the sound accordingly. At the end of the setup, users can experience the full rotation with emissions of sound truly coming across as if a helicopter in the demo is circling around you. It is quite an impressive feature when considering that the headset provides virtual surround sound, and not true 7.1 surround sound. Be that as it may, it gets the job done quite well. After all the configurations have been locked in, users experience the full extent of the audio quality within games. The audio adds another dimension to your game, often being able to highlight even the smallest of sounds that aren’t often picked up. In fact, I found myself gaming a little more each day because of the headset and the level of immersion it adds. Although the headset it suited for most gaming environments, it seems geared more towards FPSs with the level of detail such games have included, such as the sound of enemies sneaking around or speaking, to the background noises of skirmishes off screen. And with the directional capabilities of the virtual surround sound, you’ll always know exactly where to point your gun.

It would seem trivial, but listening to music doesn’t do the Kraken 7.1 Chroma any justice at all, typically offering stereo sound over surround. This means that if your player isn’t ideally setup, sounds can easily come across as washed out, with vocals suffering the most. Using the Synapse software does, however, allow you to switch to a stereo option when listening to your favourite tunes, and if you so wish, you could add a one-touch switch on your Chroma keyboard for this.

The virtualised surround sound provides a full range of directional sound that will please most gamers during their experience. The fact that the immersion levels meant I found myself wanting to game a lot more over the 2-3 week review period says a lot about the headset. It is worth noting, as well, that the microphone is quite impressive as well. In fact, the microphone, along with the settings available for it, is one of the better units I’ve used over the years, be it on a gaming or business headset, or standalone option for the PC.

The Razer Kraken 7.1 Chroma isn’t by any means perfect, with only a few niggles here and there. As already mentioned, these include the microphone mute button and slight concern over the size of the ear cup holes. The unit will set you back a cool $99. When you consider, though, all that is on offer, and how well it gets the job done, the price is more than justified. Compared to other gaming headsets with the same level of performance and surround sound capabilities, it isn’t a surprise to find prices in the range of the R2000 mark.

In the end, the Kraken 7.1 Chroma gaming headset with virtual surround sound is highly recommended. And there’s only one thing left to add: “Release the Kraken!” I couldn’t pass up on the opportunity.