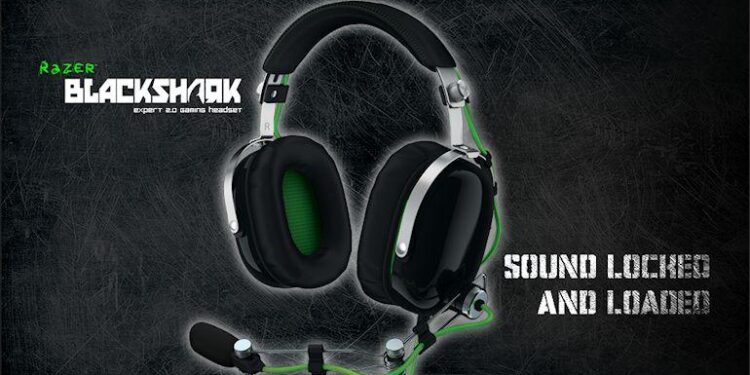 The gaming headset forms part of an essential list of accessories for the avid gamer. Razer pretty much has you covered, offering 10 separate brands for its audio lineup, with more than 6 of those being dedicated gaming headsets. FoS has previously featured Razer audio including the likes of the Kraken Neon and Kraken Chroma headsets, along with the Leviathan sound bar.

Although the original released more than two years ago in the form of a tie-in with EA’s Battlefield 3, the headset received great reviews from fans and critics that Razer decided to relaunch the headset as an update, one of which included the use of the company’s own colours. The Razer BlackShark remains a popular choice of headset for gamers, and we take a look at what it has to offer prospective buyers. The BlackShark is reminiscent of aviator headset commonly used by pilots, but, unlike replicas used by kids, these are no toys. These are, in fact, designed as military-grade headsets, with full metal construction, with visible stitching on the leather headband, all of which just add to the premium build and look. The BlackShark has a minimalistic design, with driver wires running along the surface, and metal joints very apparent. But, apart from adding aesthetic value, the design is built with purpose, as the headset is quite adjustable, despite its minimalistic appearance. There are a number of screws on each of the joints, all of which are used to adjust different parts of the unit, such as the headband. There’s even a screw to detach the microphone from the body if you find it a distraction when it’s not in use. There’s a metal cap provided in the box to cover the hole left behind after its removal. This minimalistic approach, however goes a little too far in that the ear cups have a glossy plastic finish. Not only do they diminish the premium quality, they’re quite annoying in that they pick up fingerprints quite easily.

The metal does, however, come at a small cost to the end-user. And that’s the weight. But even with the 290g of weight on your head, the memory foam, leatherette ear cushions provide great comfort over time and has a snug feeling around your ears with no added pressure to speak of. The tight fit also means that you have very good noise buffer, without the need for digital noise-cancelling, although you can’t really compare the two means of getting the job done. The unit has a 1.3mm rubber cable, which ends in a 3.5mm audio jack. This can be used on mobile devices where the jacks support both audio and microphone, but an included adapter will have to be used when connecting to devices such as your PC where two separate jacks are used. There aren’t any controls on the unit, so users are left to the audio settings on their respective devices to adjust the volume, or turn off the microphone, which is always on. Overall performance of the BlackShark throws up a bag of mixed results. But before we get into the details, we take a look at the specs and the other nitty gritty. The BlackShark has 40mm neodymium magnet drivers, with copper-clad aluminum voice coil. These produce a frequency response of 20Hz–20KHz, impedance of 29Ω, sensitivity at 1KHz of 105dB ± 3 dB, and input power of 50mW.

But, as always, we can’t judge a device’s performance based solely on specs. Most often we can’t base them on specs at all. That said, the BlackShark performs quite well in most cases. The drivers deliver loud, clear sound without any distortion. That said, the low end sounds, or bass, often overpowers the high-end sounds, which isn’t always ideal for listen to music. Instead, the sound reproduction is perfectly suited for the likes of games, which is where there BlackShark stands out with its great stereo offering. It is, after all, what it was designed for. In addition, the sound can be calibrated on your PC, so watching movies wouldn’t be too much of a problem in the long run. The tight-fitting cups also meant that there wasn’t any noise leakage to disturb others in close proximity.

If you’re looking for an out-and-out gaming headset, the Razer BlackShark is an easy choice. If, however, you expect something more in tune to the likes of music and movies, you may have to look elsewhere, since the BlackSharks were designed almost entirely for gaming. That said, the unit performs really well in terms of gaming audio, and even has a military-grade, premium, minus, of course, the plastic cups.

The headset carries a RRP of R1,399, which may be quite pricey for many. There are a few headsets you could find that offer more in the line of audio quality for that price, but where the BlackShark stands out is in its quality build. Prospective buyers will then have to decide on whether to opt for great design and above-average sound quality, or average design and better sound quality.