If history is anything to go by, gaming franchises turned into movies go together like oil and water. While most adaptations are based on highly successful games, which give it an obvious appeal to be transposed onto the big screen. But, simply based on the game’s success alone won’t win the hearts of fans, who always have high expectations. Ratchet and Clank is the latest such pairing in theatres, which don’t follow the exact same formula as previous titles. Instead, the movie released to audiences just a few weeks after the game it is based on launched on PS4. Releasing the two in such timelines was a clear indication that there would be a huge tie-in between the two. And that it was. But whereas you would’ve expected them to compliment one another, if you’ve played the game or watched the movie, you’ve basically done both. With the franchise having started in 2002 on the PS2, fans have long awaited the Ratchet and Clank movie. But this wasn’t what I would expect they’d have wanted. Far from it. The movie isn’t bad and doesn’t have many plot holes, given its simplistic storyline, it just doesn’t do enough to warrant a wide appeal. You may then be thinking that this is a movie for kids, but I would challenge even that. Sitting through the 94-minute release left me constantly trying to read the room, which was attended by 75% kids under the age of 12, accompanied in groups by a single parent, I assumed had drawn the short straw. Often times, the jokes felt forced, triggering a reaction in my diaphragm all of two times, a reference to which was audibly noticeable as even the kids didn’t have much reaction throughout Ratchet and Clank: The Movie.

The movie revolves around the story of Ratchet, a young, possibly sole-surviving, Lombax, who wishes to leave behind his boring life as a spacecraft mechanic on the outskirts of a planet, with the hope of eventually joining the Galactic Rangers, a team of heroes who face great adventure across the galaxy they’re sworn to protect. After a chance encounter with an alien robot, Clank, a reject creation from an army of evil robots bent on conquering the Galactic Rangers, Ratchet saves the day by using one of his oddball gadgets to defeat the robots, and, thus, being allowed to join the Rangers. The movie attempts to show, a now typical, hero’s journey from the plucky underdog, to matured hero, but often feels rushed, dedicating a lot of screen time to many of the other intertwining plot lines.

There are some tie-ins to the game as well, with training sequences and an arsenal of weapons during those tests. But none of that was explored in depth at any stage of the movie, possibly only having featured scene to highlight the possibilities of fun weaponry to Ratchet. Some of the weapons do feature again in the “final battle”, but even then they’re barely used. Not having played the game myself, I took some time to explore a few gameplay walkthroughs on YouTube, which showed off a lot of the movie’s content in cutscenes scattered throughout the game.

And there’s a notable difference in playing the role of Ratchet, while fine-tuning his abilities and perfecting your weapon skills, as opposed to watching a rather thinly executed version of the same thing. There is one positive point I managed to note while at the theatre, and that came in the form of the voice acting. Not only did it have a star-studded cast, their performances in isolation of the film may be one of the only reasons to keep the adventure afloat on the big screen. The actors here included James Arnold Taylor (Ratchet), David Kaye (Clank), Jim Ward, Rosario Dawson, Paul Giamatti, John Goodman and Sylvester Stallone.

Box office news from the weekend doesn’t tell a pretty picture, when it was confirmed mere earnings of $4m opening weekend in the US, which when compared to the $5m for the same weekend for Zootopia, still bringing in a steady flow of cash after over two months since its original release. The only real benefit of watching Ratchet and Clank: The Movie is that is may cost considerably less than having to pay for the PS4 title, but at least there you’re an active participant in the action sequences and storyline, which plays through long past the 90-minute mark. 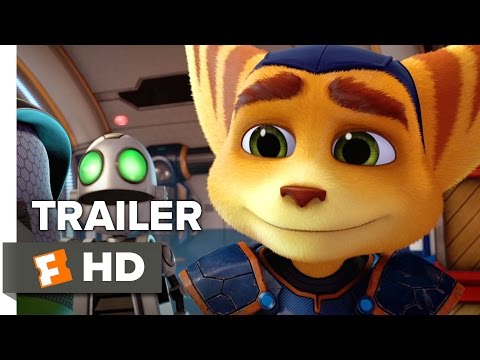