rAge 2017 – Everything Your Gaming, Cosplay and Geek Heart Could Desire 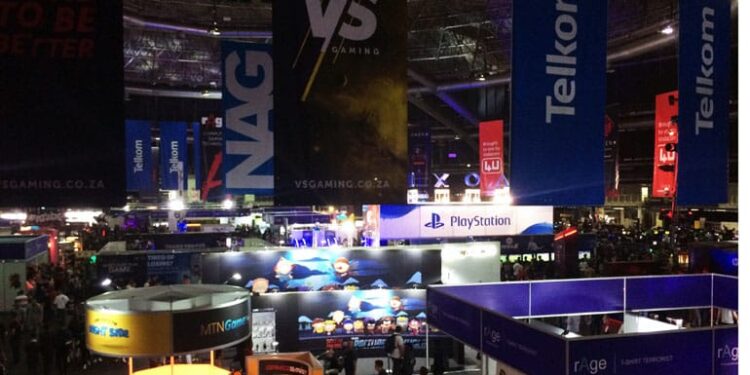 It’s hard to believe that it’s that time of the year again. It’s that special time where geeks, gamers, tech-heads and cosplayers from across South Africa converge on the TicketPro Dome for rAge (6-8 October). Of course, rAge 2017 promises to be bigger and better. As I arrived at the venue, the excitement for what lay and wait inside the TicketPro Dome was palpable, even before I entered. It seemed that not even the rainy weather would be enough to douse the excitement. Having made a list of what I would like to see and experience at this year’s rAge, the night before I was ready to enact my game plan, and while I didn’t get to play everything I wanted, I did get a bit of hands-on time with some of the most anticipated games of the year.

First up, I headed to the Xbox Stand which once again had increased in size from previous years. With games such as the absolutely gorgeous Cuphead, Forza 7, Middle-Earth: Shadow of War and Assassin’s Creed Origins on display, I was spoiled for choice. After a quick game of Cuphead (I say quick, because I kept dying), I found myself staring at the logo for the latest entry in the Assassin’s Creed franchise.

While I was already anticipating getting my hands-on Assassin’s Creed Origins, I wasn’t expecting to be playing it on the powerful new Xbox One X console. Not only does the game look amazing running in true 4K but the new Egyptian setting makes for some breath-taking new environments to explore. I was fortunate enough to have an extended hands-on session with the game and, while it does feel familiar, much has changed since the previous entry in the franchise.

Firstly, Assassin’s Creed Origins has fully embraced the RPG genre with a leveling system, skill trees, equipment, and crafting. It’s a change I’m happy to see as it adds another rich layer to the Assassin’s Creed formula. While it’s easy to think that a desert setting would be dusty and dull, I found it surprisingly alive and vibrant. As I explored my surroundings, I came across colourful villages scattered throughout the dry desert, boats traveling the many estuaries that dot the land and even a few deadly animals. It’s striking how alive the world of Assassin’s Creed Origins feels.

Along with the new setting, the game also incorporates a brand spanking new combat system. The new system takes its cues from games such as the Dark Souls series and, while by no means as difficult, combat has definitely picked up a notch. Players are now able to lock onto a single target and use a combination of blocks, parries, heavy and light attacks to dispatch their foes. This new system makes combat feel more involved and strategic. Figuring out where those pesky enemies are hiding can be tricky and that’s where protagonist Bayek’s companion, Senu, comes in.

Senu is Bayek’s pet eagle which he can use to scout out areas and tag visible enemies, it’s a system that makes sneaking around and planning ahead so much easier. While my time with the game was all too brief, it’s clear that the game combines the familiar with the new in a very successful way and I can’t wait for the game’s release. Next up was Middle-Earth: Shadow of War, which was also running on the Xbox One X. As you might guess, Middle-Earth in true 4K looks spectacular. Although the game sees players once again taking on the role of the vengeful undead ranger Talion as he tries to recruit an army of Orcs to his cause, the game has expanded many of the original’s mechanics. This includes the much-loved Nemesis System, as well as introducing a new siege mechanic which wasn’t present in the original game. Unfortunately, I had to bid Middle-Earth farewell as I decided to explore the bright lights and rows of stands further.

As I walked through the myriad of stands, each filled with shiny pieces of technology and various other items (such as figures and board games) beckoning me to open my wallet, I found myself ending up at the PlayStation stand. With the large PlayStation logo welcoming us, my colleague, who is a master of the racing track, decided to give Gran Turismo Sport a go. Now to be honest, I tend to really suck at racing games and, while my colleague did make it seem easy, I knew that I would end up embarrassing myself if I tried to play the game. With so many racing games releasing in the next few months, GT Sport has quite a bit of competition. From what I saw, the game looks great and seems set to build on the proud Gran Turismo legacy. Along with GT Sport, I played a bit of Marvel vs Capcom: Infinite and it is still just as fast-paced as the previous games in the franchise. While I did put up quite a fight, I ended up losing all but one of the matches I played.

As with the previous year, PlayStation VR featured heavily at the stand, with games such as the phycological horror The Inpatient and the first-person shooter Bravo Team taking center stage. After my crushing defeat(s), I decided to go shoot some bad guys in the latest entry in the Far Cry franchise, Far Cry 5. Although the game follows the classic Far Cry formula, it does incorporate some interesting new mechanics. Even though the game takes place in a new setting, there were few surprises as everything you’ve come to expect from a Far Cry game forms part of Far Cry 5. You’ll still be taking down enemy outposts, shooting bad guys and driving all manner of vehicles. There are, however, some new additions to the formula.

Far Cry 5 lets you choose a companion to accompany you while playing. These companions are Boomer (the dog), Nick Rye (the pilot), and Grace (the sniper). Boomer excels when fighting alongside the player, fetching guns and ammo when in a pinch. Nick, who I found the most useful, assaults enemies from the air using his plane. And Grace can cover you from a distance (although she’s not too bad up close). Along with the new companions, the game also takes place in a brand-new setting called Hope County in rural America. It’s evident right from the start that the overzealous fanatics that fill the various towns in Hope County will not only ensure an interesting narrative but make for some really tough enemies. If the new rural setting is handled correctly, it could set up some interesting conflicts and ensure some great narrative moments. During my time with the game, I liberated a town, drove a big ass truck and flew a plane while bombing a convoy.

I have to make special mention of the flying in Far Cry 5. Usually I kind of suck at airborne combat but the plane that I flew controlled so well that I ended up being better with the airborne combat than I was when running and gunning it on the ground. The game also has one of the most heart-pumping, kick-ass rock soundtracks I’ve heard in quite some time, which perfectly complements the over the top and chaotic action in the game.

Far Cry 5 looks good, has some interesting characters and an arsenal of great weapons to choose from. With a new setting and the ability to take a companion along to help you wipe out your enemies, the game promises to bring some innovation to a tried and tested formula. After my companion Boomer (the dog) and I had shot (and driven over) a few bad guys and cleared the town we found ourselves in, it was time to move on. There were many other games to get to and so little time. I have only mentioned some of the games I was able to play but there are so much more to experience at rAge 2017, like South Park: The Fractured But Whole, Call of Duty: WWII and David Cage’s next project, Detroit, which I was pleasantly surprised to see at the PlayStation stand. For the kids, there’s always the ever-popular LEGO games stand where they can try out all of the latest LEGO games, including the soon to be released LEGO Marvel Super Heroes 2. Scattered between the various gaming stands, there were a surprising amount of non-gaming related stands and activities. With board gaming growing in popularity, it was great to see so many stands, such as Timeless Board games and the Unplug yourself gaming area, being filled to the brim with board gaming enthusiasts.

Of course, rAge would not be complete without the cosplay community showing off their amazing outfits and this year is no exception. Everywhere I went I found yet another amazing cosplayer wearing a costume. It was great to see how much the South African community has grown. South African developer Robot Wizard, who has just returned from showcasing their upcoming point-and-click adventure game Jengo at Gamescom, was also present at rAge 2017. Attendees were able to play a demo of the highly anticipated locally developed game. Along with Jengo, there were quite a few other locally developed games at the Home Coded stand, such as Codex Knights and The Adventures of Sam Carlisle: The Hunt for the Lost Treasure. There was a noticeable trend on the floor this year, with a number of manufacturers on show around the venue. In previous years, the Dome was dominated by Sony and Microsoft with their consoles. However, there’s been a slight shift in recent years as tech giants such as Acer, HP, Asus, and Alienware have released their respective gaming brands in the country, focusing largely on gaming laptops. I had time during this year’s rAge to discuss some strategy and new and upcoming releases with Acer on their Predator range and HP’s Omen range.

rAge also hosted the VS Gaming Championships and ESLA Africa Grand finals over the weekend. It’s a community that has grown exceptionally in the past few years. Of course, there are various other tournaments taking place over the weekend as well, such as Hearthstone, Call of Duty, Battlefield 4 and Overwatch.

This year’s rAge has just once again proven how much fun it can be when cosplayers, gamers, and geeks get together to celebrate what they love. With something for everyone, rAge 2017 is a must for those that want to see the latest games and technology or just experience the ever-growing geek community.