Farming, a word associated with honest hard work, the outdoors, driving a bunch of really awesome machinery around and patience, lots and lots of patience. While farming might sound like a lot of fun, it’s much more work than most people realise. Hence, it’s something that I just have never seen myself doing. Although I’ve always wondered how I would fair as a farmer working the earth, feeding my livestock and singing “Ee-eye, ee-eye, oh” as the sun gently set behind the hills in the distance. Well, thanks to Pure Farming 2018, I’ve come to realise that maybe the farming life might actually be for me. With the farming simulation market mostly dominated by the aptly named Farming Simulator series, developer Ice Flames has decided to take on this agrarian giant with their own new farming simulator called Pure Farming 2018. As the new kid on the block (field?), Pure Farming 2018 had to pull up its overalls and give the farming simulation fans out there (you’d be surprised how many there are) a reason to give this new franchise a try. Did the game succeed? Well, let’s just say I was pleasantly surprised with what I found.

First things first, as a budding new farmer, thanks to your deceased grandfather who left you his farm (and a nice steaming pile of debt), you are tasked with not only keeping the farm running but also repaying the aforementioned debt your grandfather left you. Its seems old grandpa might have been a bit lax when it came to the financial side of things. It’s up to you to turn around old grand-pappy’s farm and become the farmer you’ve always wanted to be. Now, while the prospect of running a farm might seem daunting at first, Pure Farming 2018’s campaign does an adequate job of easing you into the role of a budding new farmer. You’ll learn to drive a tractor, plough the fields and sell your crops for sweet, sweet cash. It’s this accessibility that makes it one of the best farming simulators to get you into the genre – if you don’t mind the games slow pace. Once you’ve become accustomed to the ins-and-outs of being a farmer, predicting when to plant which crops and even breeding your own livestock, you’ll soon be making enough money to not only pay off some of the debt you are facing but also buy shiny (and even larger) new farming equipment which in turn will help you plant more crops. While this loop of buying better equipment to get more cash so you can buy better equipment to make even more cash does tend to get a bit repetitive although it can also be strangely addictive as I quickly found out. There’s something quite cathartic about driving up and down a field ploughing as you go, of course, this slower pace might not be to everybody’s liking.

Pure Farming also gives you an interesting way of managing your farm using technology. At the start you are given a handy tablet which lets you track your farm’s stats and even purchase fuel or seeds, should you run out. Now, there is a catch to this as purchasing fuel and seeds using your tablet does cost between 20 and 50% more than if you drove to the filling station or store and picked it up yourself. This meant that I had to continually weight up the time I would lose, for instance, driving to the petrol station, against the increased cost of just buying it using the tablet. Oh, and did I mention that you need to keep your farming equipment in tip-top shape. Neglecting your tractor by not servicing it could mean that it starts using more fuel which in turn costs you both time and money. Managing your day and deciding which task takes priority becomes quite important as you progress. Whoever said it was easy being a farmer? Another integral part of being a farmer is helping out your neighbours by completing side-missions, such as helping a fellow farmer water their fruit trees. The best part is that these side-missions give you some well deserved extra cash to spend. It’s great to see a farming game expand on what it is like to be a farmer and, while harvesting crops and feeding livestock makes up the bulk of the experience, the introduction of these side-missions does help break up the repetitiveness in some cases.

The game also features a challenges mode where you are given various tasks to complete each with their own criteria for success. These could include dealing with a drought or growing a specific crop. These challenges take place on various new maps such as Japan, Italy, Columbia and more. It’s an interesting change of pace from the laid-backness of the campaign mode. Now, all is not sunshine and potatoes as there are some issues with the game. Most notably it’s visuals. Having said this the game isn’t necessarily ugly it’s just “ok” looking, which is mostly thanks to a terrible draw distance and quite a few blurry textures. I also have to mention that it took me a while to get used to driving my farming equipment, although this could be due to my absolute lack of skill when it comes to most things involving machines with wheels. While I didn’t expect to fall in love with Pure Farming 2018, there is something to be said about its accessibility and addictive laid-back gameplay loop (this is not a game for the impatient types). Sure, it won’t convert non-farming simulator fans to the cause, but it does make getting into the genre a lot easier for those curious enough to give it a go. It’s by no means a perfect game but it is a step in the right direction. Now excuse me, there are some fields that need ploughing and tractors that need fixing. 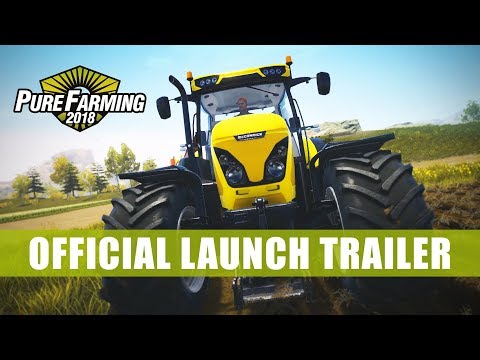