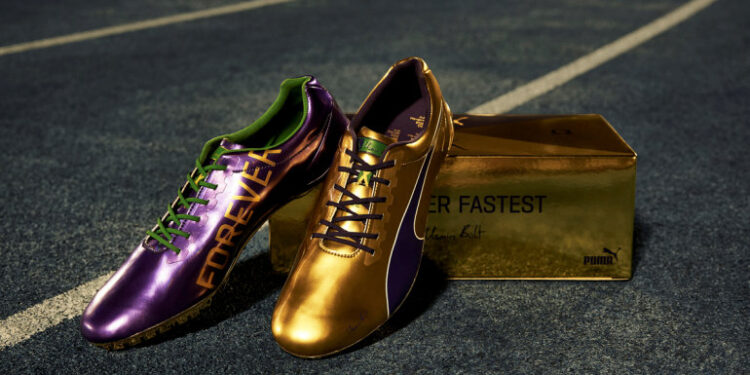 Usain Bolt is set for his swansong at the 2017 London IAAF World Championships in a few days time. At an event held in London last night, 1st August, Puma presented Bolt with a commemorative pair of Puma Legacy spikes, which were handed over by his mother and father who made a surprise appearance.

The ceremony was held in honour of Usain Bolt who will run his last races this August on the global stage, with his 100m final on the 5th August and 4x100m relay on the 12th August.

The limited edition Legacy spikes were presented by Wellesley and Jennifer Bolt, who proudly stood on stage to hand over his final pair of Puma spikes as a professional athlete. It was a reminder to him of key moments in his career, having contributed not only to athletics but to world sport. The spikes themselves are purple and green on the right shoe on the inner side with the label, “Forever”, which represents the high school Usain Bolt attended and where his career first began. The left shoe, however, is golden with the label “Fastest”. The tongue of the spikes has Bolt’s signature and a mark of his classic pose embossed, as well as the Jamaican flag incorporated to show the love he has for his home country.

These shoes represent the great success of his career, having achieved major success since 2002. These words symbolise the start and finish of Usain Bolt’s professional track and field career.