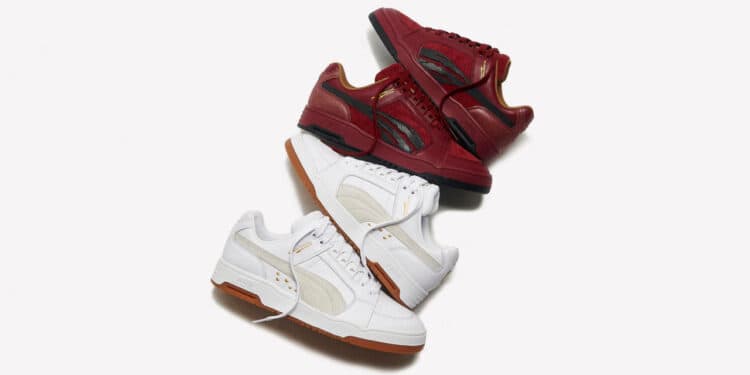 PUMA has dropped a few sneakers from its classic basketball range in recent weeks. From the reimagined MB.01 to the RE:SUEDE, the brand has mixed things up dramatically in 2022. Staying on course, it has launched another classic, the PUMA Slipstream.

The first PUMA Slipstream sneaker was released as a basketball shoe all the way back in 1987. It was the successor to the PUMA Sky LX silhouette. Since its release, it has become of the classics for the sport, a favourite amongst ballers in the late 80s. It brought with it new performance, stability and cushioning.

It garnered just as much fame off the court. The sneaker brought with it street cred among sneakerheads and the subculture generation of hip-hop dance crews for its unique design. This is in a similar vein to the PUMA Suede sneaker, which was released some two decades prior.

As part of its popularity, two variants of the sneaker were released in 1988. This includes the PUMA Beast and the Slipstream Snake. These sneakers gained notoriety on the shores of Japan, which led to the Made in Japan version being released in the early 2000s. This relaunch also saw the release of variants with faux snakeskin, leather and faux fur, to create a unique, eye-catching design.

Fast-forward to 2022 and PUMA has, once again, re-issued a variant of the Slipstream for today’s consumer. In doing so, it stays true to its 1980s basketball heritage. The Slipstream pack takes its cues from The Beauty and the Beast pack, in reference to the Japanese iterations of The Beast.

The latest additions to the basketball range feature modern designs, with a play on the beast name, while paying homage to the storybook tale.

Inspiration is seen throughout the design. This is included in key elements, alluding back to the menacing beast and the charming beauty.

the inspiration is clear throughout, playing with key elements that allude back to the menacing beast and the charming beauty.

The PUMA Slipstream range is currently available on PUMA.com, as well as PUMA stores at V&A Waterfront and Gateway. Both sneakers retail for R2,399.

The PUMA Slipstream Lo Beast sees its unique colourway in burgundy. It also features more intricate details such as the claw-pattern Formstreip and gold trinkey.

The PUMA Slipstream Lo Beauty on the other hand, features a white leather upper. Additional details include the rose trinket and petal embroidery on the quarter.