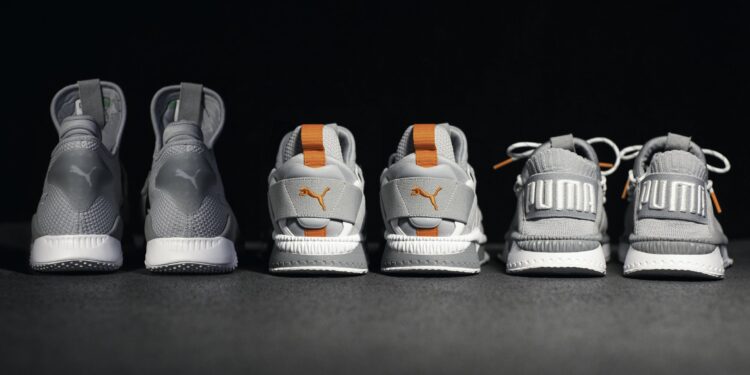 Puma has been known to drop new colourways and packs to commemorate events and festivals around the world. This time around, the company has launched a new colour pack in honour of the Japanese Autumn Moon Festival, currently being celebrated in Japan.

The word, Tsukimi, is a literal translation of “moon-viewing”, the same name which is given to the Japanese festival honouring the autumn moon, and not to be confused with the similarly-timed and celebrated Chinese Moon Festival. Drawing on this inspiration, the Tsukimi Pack features clean and simple stylings and have been translated onto three archive silhouettes, the Tsugi Blaze, Tsugi Shinsei and Mostro. Each of the three designs were derived from a lunar, tonal colour palette to reflect the simplicity of the moon, with the addition of a reflective midsole inspired by the moon’s radiance. In addition to this, the sneakers also feature subtle rabbit graphics, which allude to the Tsukimi legend of the moon rabbit, similar to that of the Easter bunny. The moon rabbit comes from Japanese folklore, which depicts that a rabbit lives on the moon. The Japanese culture further draws meaning from the moon-viewing, which resembles a rabbit grinding ingredients for rice cakes, now synonymous with the festival.

The Tsugi Shinsei was launched earlier this year as part of Puma’s reimagining of the Sportstyle era. The sneaker pushes design to the next level with a unique lacing pattern and all-new tooling and sole unit. The Tsugi Shinsei Tsukimi has a cleaner, lunar look with an all-over grey and white colourway and reflective midsole. The Tsugi Blaze Cage was launched alongside the new Tsugi Shinsei colourways and is based on the iconic Blaze of Glory, which, in turn, draws inspiration from running in the 90s. The sneaker reintroduced Puma’s trademark Trinomic technology and material play of plush and plastic. The Blaze Cage Kiku, also launched earlier this year, featured a clean white look with a white upper and outsole. The Tsugi Blaze Tsukimi, while still offering a clean lunar look, introduces an all-over grey and white colour palette and reflective midsole. Whereas the previous sneakers were recently launched, the Mostro was first introduced to the market back in the previous millennium, 1999. It made a return to the scene with the recent trend of classics to the market with a much sleeker look. The Mostro Sirsa Tsukimi provides a much softer feel, with a clean lunar look with an all-over grey and white colour palette and reflective midsole.

Puma’s Tsukimi Pack Tsugi Blaze and Tsugi Shinsei styles are due to drop in stores from 6th October 2017 at Puma Select and Superbalist.com, which is then followed by the Mostro Sirsa Tsukimi towards the end of October.