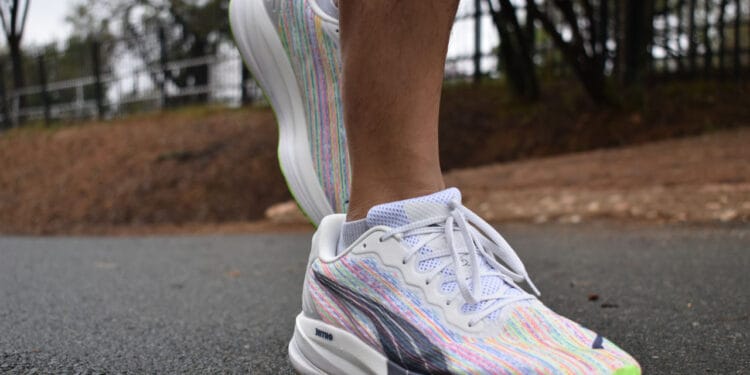 A few months ago, PUMA announced its re-entry into the world of running with the announcement and launch of the Deviate Nitro. This serious challenge with its first carbon-plated runner was met with quite a mix of reviews. While its performance is undoubtedly powerful, there were a few issues in durability from the upper after reaching 400-500kms. PUMA has extended its Nitro range with the Spectra pack. One of those released was the PUMA Magnify Nitro Spectra.

While the Deviate Nitro was designed and built for speed, the Magnify range is all about cushioning. A lot of it. Although both sneakers are part of PUMA’s reintroduction into this space, it may be the best comparison. That said, it’s worth touching on why exactly they are different, allowing you to choose which would work best for you. 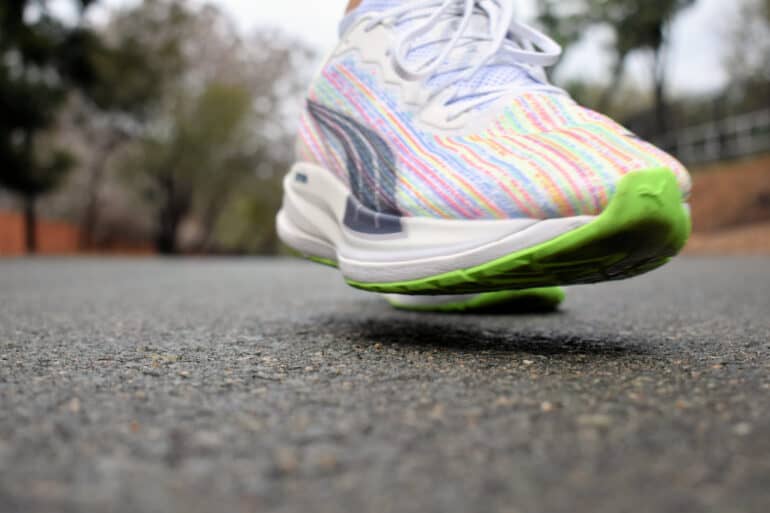 With the new Spectra pack, there’s a complete overhaul of the upper featured on previous running shoes. It also has the mesh finish found on the Deviate Nitro, but with the newly-designed Spectra pattern, it has quite a different feel to it.

Both running shoes have the underlying mesh material, but with the Magnify, there’s an additional layer. As a result, it means that the upper is also quite a bit thicker overall. When you slide your foot into each of the sneakers, you can feel this additional thickness.

As for the design itself, the Spectra pack features a linear colour mix. If you look at it closely enough, each line looks like morse code. The lines are broken into repeating colours of blue, green, red and a lumo yellow. These lines of colour are space by a clear line between them, which appears as white from afar.

The Formstrip appears only on the lateral sides of each sneaker. It still has the underlying morse code texture but is coloured in a darker mix of greys. Again, as with the previous packs, the Formstrip spills over onto the midsole, where it’s been ‘painted’ on.

On the rear, there is a noticeable difference. A 3D-moulded heelpiece is fitted around the heel area. Unlike many other shoes that have a TPU plastic finish as a lock-in for the heel, PUMA has gone with a mixed material approach. The shell is moulded in plastic, with the outer side covered in a cloth texture, while the inside is surrounded with foam padding. 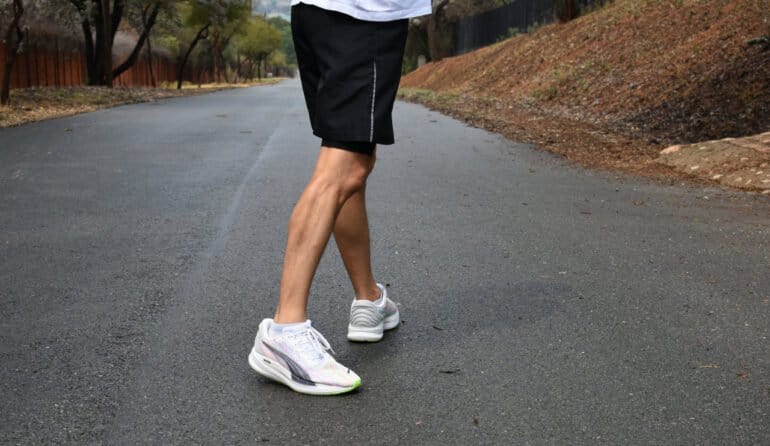 It doesn’t matter to which other sneakers you compare it to, the PUMA Magnify Nitro Spectra has comfort in abundance. You won’t feel it when you’re in the process of putting the shoe on, but once you’ve put all your weight on it as you stand up, you can feel all that rubber underfoot.

There’s an undeniable spring in the step when walking out of the house with the shoes. I could feel this as I walked the 600m to the front gate to hit the road and increased once I started running. The rebound in each stride was impressive, feeling as if it was being cushioned with pillows as I hit the ground. There’s a distinct difference over that of the Deviate Nitro.

To test it out beyond hitting the tar on the road, I had even pressed it against a few larger stones lying around. I did this as the toe end and the heel with the same result. The cushioning is second to none. As I pressed in on the stone, I could feel it’s there, but couldn’t feel that pressure translates into any discomfort within the shoe on my foot at all.

The cushioning is more than just the midsole. It’s also felt inside of the shoe around the foot. This includes the insole, the heel collar and extends all the way to the toe box. In addition to this, the heelpiece also adds secure lock-in. As a result, there’s no movement around the area when you’re walking or running. This, again, is an advantage over the Deviate Nitro. 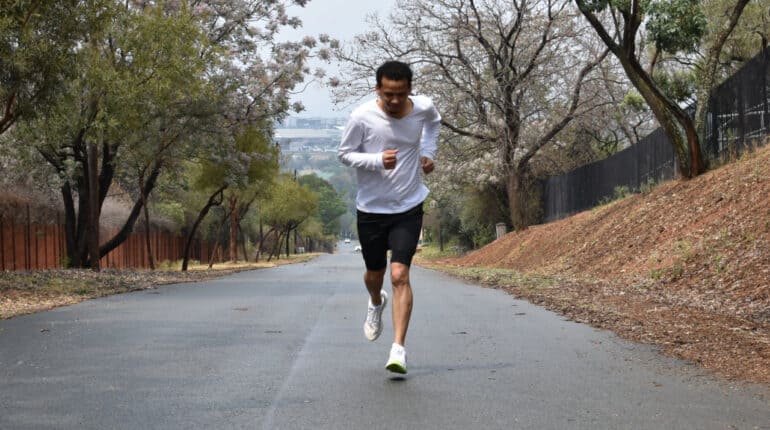 Performance-wise, the PUMA Magnify Nitro Spectra offers quite a bit. It’s not going to be as fast as the Deviate Nitro with its carbon-plated midsole, the INNOPLATE. The rebound and energy provided through this makes a clear difference. That’s not to say the Magnify Nitro is slow.

The biggest difference for me between the two is how I use them. For those training or distance runs, I prefer going with the Magnify Nitro. Whenever I wish to push for a timed run or a shorter run, then the Deviate Nitro would be the preferred choice. The latter is a race-day shoe.

Unlike the exaggerated midsoles from other carbon-plated shoes, both the Deviate Nitro and Magnify Nitro aren’t prone to the same amount of injuries or niggles. Runners from other brands can often put a lot of strain on your ankles and calf muscles. However, with PUMA’s Nitro range, it feels a lot more secure and accurate, with less chance of wiggle room underfoot.

On the Magnify Nitro Spectra, the heelpiece and added cushioning makes it far more secure, especially around the ankles. There’s peace of mind as you move through the gait cycle. From hitting the tar on the heel and the toe-off at the front, there’s less stress on your foot, ankles and calf overall. And this, to me, makes the most difference, as I can run for longer and more often at that. 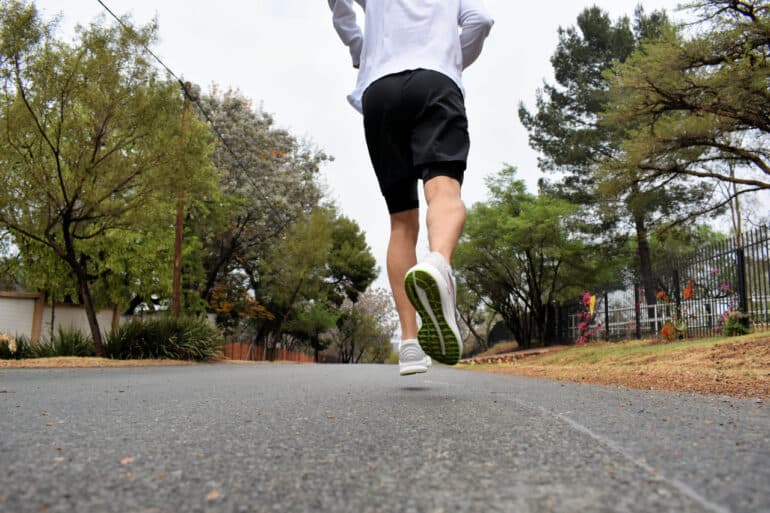 Given the issues a few runners have experienced on the Deviate Nitro upper, there’s a lot to be made about the redesigned approach on the Magnify Nitro’s Spectra pack. This redesign feels as if it has quite a bit more durability. But only time will tell in this regard.

Personally, having also clocked in over 500km on the Deviate Nitro, I had no such issues on my end. This may come down to terrain, weather and how you can for the shoe. For many runners, there’s often no worry in their shoes picking up dirt, with many looking as if they’ve been through the paces. In parts, there shouldn’t be an issue, but on the other end, you don’t want mud to collect and dry, and then get wet all over again and go through this cycle. This is especially true if you’re not going to be giving it a proper wipe-down.

But, in general, the Magnify Nitro Spectra feels solid. As a result of the additional rubber underfoot, there’s also a sense of stability that it provides. You won’t be wearing down the shoe as unevenly as higher-performance runners.

Another of the quality changes on the Spectra pack is the painted end of the Formstrip, which spills onto the midsole. Unlike the Deviate Nitro where this portion started to peel within a few runs, it hasn’t even looked like peeling at all this time around. In fact, it looks just as clear and fresh as it did when first receiving the shoes. A clear change of quality control back at the factory during manufacturing. Thanks to its cushioned approach, the PUMA Magnify Nitro Spectra is a great daily driver. It doesn’t feel heavy under foot with its added midsole padding but absorbs quite a bit of impact as your run. It feels good overall while being able to keep going for longer without feeling the strain.

Even though I was reviewing the Magnify Nitro, I would take a few runs with the Deviate Nitro when I felt up for a timed run. For the most part, the former is the one I’d prefer for the regular runs. It just feels good and comfortable, allowing me to focus on the overall run and not worrying about every stride I take.

The PUMA Magnify Nitro Spectra retails for R3,300 and is available online at PUMA.com, as well as at PUMA stores across the country.

The PUMA Magnify Nitro Spectra is one of the most comfortable running shoes on the market. It’s solid as a daily runner. With its lock-in heel and additional cushioning, it’s supremely comfortable throughout any run, reducing the risk of injury and strain.