Puma Gets Ready for Halloween with Blaze of Glory Twin Pack 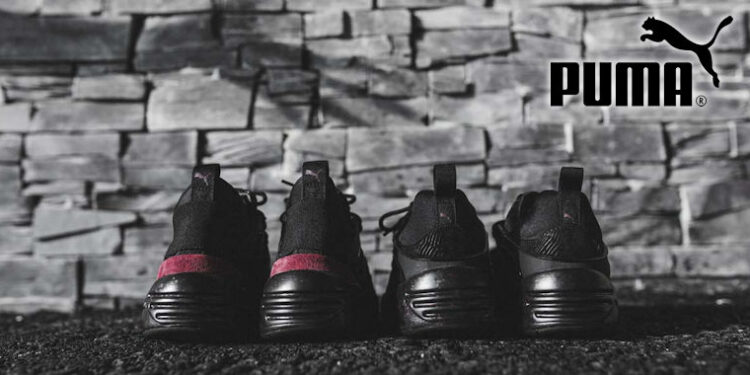 It’s that time of year when horror movies abound, costumes are being fine-tuned, and scare tactics carefully planned. Yes, it’s almost Halloween, which takes place on Monday, 31st October. While most sweet and costume companies are gearing up for an increase in revenue, it may not even be considered as part of their marketing campaigns. Puma, however, has broken the mould by offering two new designs with the Blaze of Glory Halloween Pack.

“Two Trinomic silhouettes gets a fright night treatment that’s perfect not only for Hallow’s eve but all days of the year.” The colour theme draws inspiration from one of your Halloween favourites, the vampire. The B.O.G Sock (R2299) and B.O.G OG (R2499) feature black and red colour blocking taken from his villainous cape.

“The Blaze of Glory debuted in the 90’s, joining the coveted Trinomic collective. Trinomic changed the running game with its hexagonal rubber cells, which compressed and expanded to cushion, flex, and stabilize with every step. The BOG Sock is a remixed version of the OG with a sleek sock construction. This evolution of the iconic design features an updated toe box and vamp, complemented by a mix of mesh and elastic airprene on the upper. The material play continues on the collar, where stretchy binding allows easy on-and-off. This reinterpretation of the B.O.G Sock completes its minimal transformation with a modernized tongue and prominent PUMA No. 1 logo.”

The PUMA B.O.G. Halloween Pack will be available at PUMA SELECT stores in Bree Street, Cape Town, and in Braamfontein, Johannesburg, from the 14th October 2016.