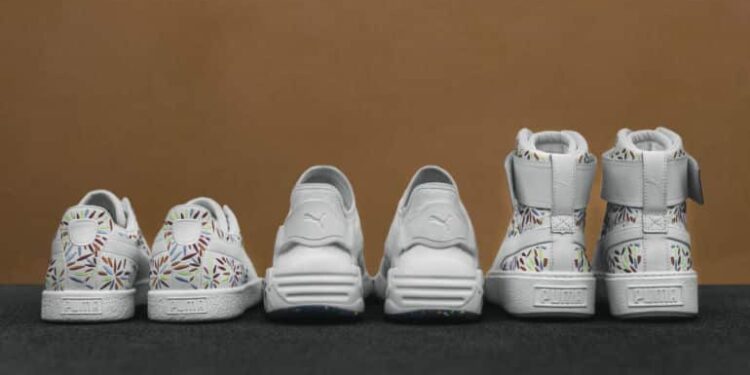 For the second week in succession, Puma has drawn inspiration from Japanese culture. Last week’s Tsukimi Pack was released in honour of the Japanese Autumn Moon Festival. This week, the Kiku Pack page homage to one of Japan’s five ancient festivals, Chrysanthemum Day. The tradition of enjoying the fleeting beauty of flowers throughout each season ties into many of Japan’s cultural significance and festivals. The Kiku Pack, named after “Kiku no Sekku” also known as Chrysanthemum Day is celebrated on the 9th day of the 9th month. The chrysanthemum flower holds huge cultural ties in Japan, both a national symbol and seasonal flower of September. The release of the Kiku Pack follows that of the Hanami Pack, which dropped in March ahead of the Spring season. The Kiku Pack includes: Since its release in 1973, Puma’s classic silhouette, the Clyde, has seen countless iterations and creatives in its history, and continues in that vein with the Clyde Kiku. The Clyde has had a huge influence on popular culture, film, fashion and even language. The Clyde Fashion Kiku features a white upper with chrysanthemum flower embroidery detailing, which is rounded off with a clean stitch, along with turn Puma Formstripe and hidding lacing. The Blaze Cage Kiku is based on the iconic Blaze of Glory, B.O.G., which itself draws inspiration from the running scene of the 90s. The silhouette features Puma’s trademark Trinomic technology and material play of plush and plastic. It also features a clean white upper and outsole, which is elevated with the ice-speckled outsole and graphic detailing on the footbed. The standout from the new range is the Platform Mid Kiku Wn, which was designed for every occasion. As with the previous silhouettes, the sneaker draws inspiration from the 90s grunge fashion movement. The Platform features again features a white upper and stacked outsole, complete with the allover flower embroidery detailing as with the Clyde. The look is completed with hidden lacing and removable Velcro strap.

The Kiku Pack is available from 13th October 2017 and can be purchased from Puma Select and X-Trend.