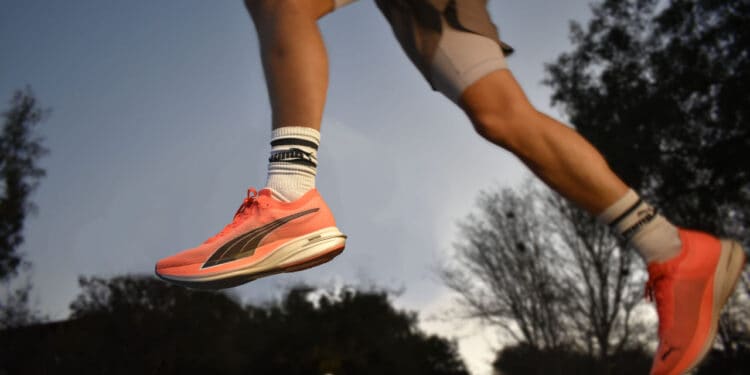 PUMA promises you will “beat your time then beat it again in PUMA Deviate NITRO.”

The carbon-plated generation of runners is now firmly in the mix. And it’s here to stay. In all honesty, if you’re a running brand without featuring a carbon-plated shoe, there will definitely be a few murmurs among the pack of serious runners.

2020 saw the most activity in this segment, both in terms of releases, as well as making the headlines as to the eligibility for competing athletes. When PUMA released its carbon-plated range of Deviate runners in February, it marked its return to top-tier road running. And the PUMA Deviate Nitro was at the top of its list of performance runners.

Although not the first, it was the Nike Air Zoom Alphafly Next% that caused most of the controversy in 2020. It was announced as legal shortly after launch, avoiding the so-called Tech Doping title. Soon after, the floodgates opened to more brands releasing their offerings to the market, including the adidas adizero adios Pro.

Having reviewed these two leading contenders on Fortress, I was excited when I had the opportunity to review the all-new PUMA Deviate Nitro.

The question is, how does it stack against the previous contenders in adding performance gains to your daily runs? The answer may not be as straightforward as you’d think. 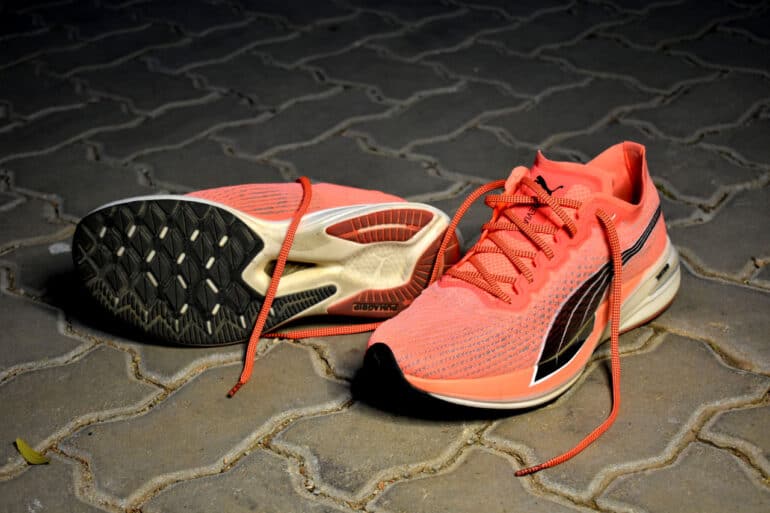 In recent times, unboxing running or fitness shoes has brought a certain level of excitement. Gone are the days where it was just form and function. Today, the design also plays a huge part, for its style, as well as still providing functionality. The PUMA Deviate Nitro is no different.

Right off the bat, the design screams at you. That shocking colourway, dubbed Lava Blast, grabs your attention. More than just the colour, it’s the fine detailing on the upper. The mesh upper resembles some previous sneakers, with a slightly different styling. But it’s not just about the look, it’s also about its lightweight finish and robust build.

What’s also useful about a mesh material is that it offers quite a breezy approach. For most runs, that’s always a bonus, as overheating feet and toes aren’t comfortable, especially on those longer runs. However, it does make for grinding of teeth when you’re leaving the house on a cold winter morning, especially if it’s a little soggy outside. That said, I’d prefer the mesh finish over closed materials, even in the wintertime. Just add a thicker sock if it does start to bother you as temperatures drop.

The design is fairly simple other than this. PUMA has added a very large Formstrip to the lateral side, which spills over from the upper onto the midsole. While the upper portion is material, the lower bit is painted onto the rubber.

After two weeks of running on mixed terrain, including tar, grass, sand and adding some moisture, the painted portion started peeling. It did look a bit unsightly as the start, but once all of it fades or peels, the Formstrip wouldn’t look incomplete as a result. That’s pretty much the only negative about the design, more cosmetic than any hindrance on your performance. 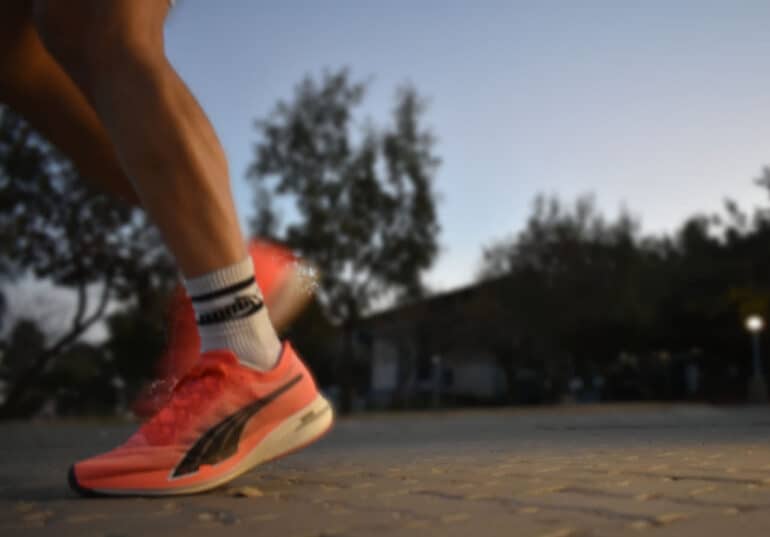 As with the design, comfort provided on the Deviate Nitro is as good. PUMA has done a great deal of work behind the scenes on the Nitro range. The range isn’t like any other within its catalogue. And, while there are some elements that are found within the PUMA range, there’s a lot of new technology involved.

As with many other performance shoes, the focus here is on leveraging a lightweight foam. Unlike those other shoes, however, it utilises TPU for its NITRO Foam midsole. This is a heavier material. As a result, the shoe isn’t the lightest around. But you don’t necessarily feel weighed down with the amount of support you get from the midsole during your stride.

Another change over other carbon-plated shoes is that PUMA has opted for a more conventional gusseted tongue. Along with its closed lacing system, it offers more midfoot lockdown than those other shoes in this category. This provides a more secure fit, which ties into the other elements of the shoe to aid that feeling of snugness. It may seem trivial but does a lot for your comfort while running. That security and peace of mind is a definite positive.

There is one aspect of the shoe that needs improvement is the collar. It does have padding around the ankle (some 5mm), which makes it more comfortable, but it doesn’t lock your heel in place. This means there is a slight amount of slippage experience, which is a strange sensation on your first run. However, having adjusted the lacing and becoming accustomed to it over time, I barely notice it now. Thankfully, the rest of the foot is fairly secure, so it won’t interrupt your run too much, even the first time you hit the road in your new runners. 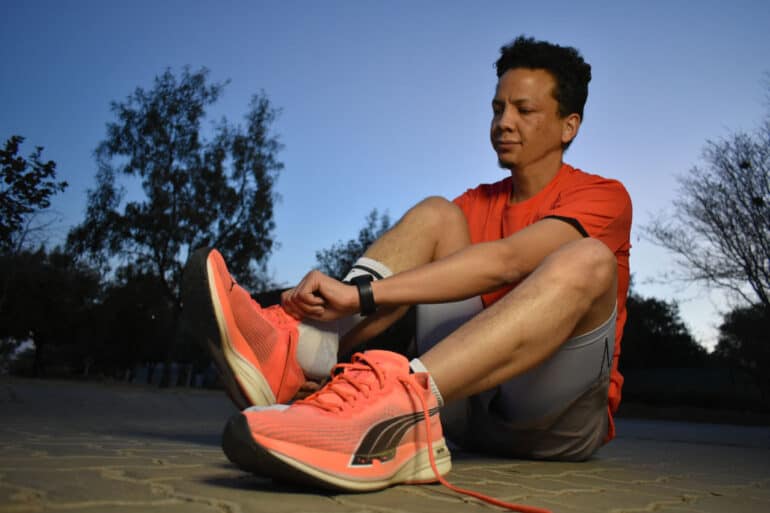 There’s a lot to be said about design and comfort, but there’s still the small matter of having to deliver on performance.

As stated previously, the PUMA Deviate Nitro features a TPU midsole. This compared to the Pebax foam on the high-end runners. While they’re both polymers, in a like for like comparison, Pebax is about 20% lighter than TPU. It is also more durable and responsive, adding more bounce. What this means is that Pebax shoes can have a thinner platform to offer the same amount of bounce without, reducing the weight. It can also add more material for a thicker heel for even more bounce and still keep the weight down.

That said, it’s a fine balance in adding the correct amount of material to the midsole. Too much and you’ll have more responsiveness, but could potentially result in more injuries for runners due to the strain on their bones and muscles from the movements it promotes. Too little and you’re putting a different type of strain, that of impact.

On the PUMA Deviate Nitro, the balance was great. This is especially true as a daily runner. Compared to both previously-mentioned running shoes, the Deviate Nitro doesn’t leave you needing more recovery time after your run. In fact, I felt I could run more often in the course of a week without needing to skip days to recover. And this is key.

PUMA has added a nifty trick with the NITRO Foam to provide that extra boost without too much mechanical effort. It has been infused with nitrogen. This makes it feel lighter without it actually being lighter, as a result of the added responsiveness underfoot.

In addition to this, because of this balance, runners are also able to transition between varying distances and even terrain. Whether I ran my average 5KM run or bumping it up to 10KM, the feeling remained consistent. Switching between tar, grass and dirt, the amount of grip from the PUMAGRIP outsole made it easy to transition, even during the same run.

The support from the NITRO Foam and INNOPLATE also make this easier. The result of this is that there isn’t much of a difference in feel underfoot when mixing it up. 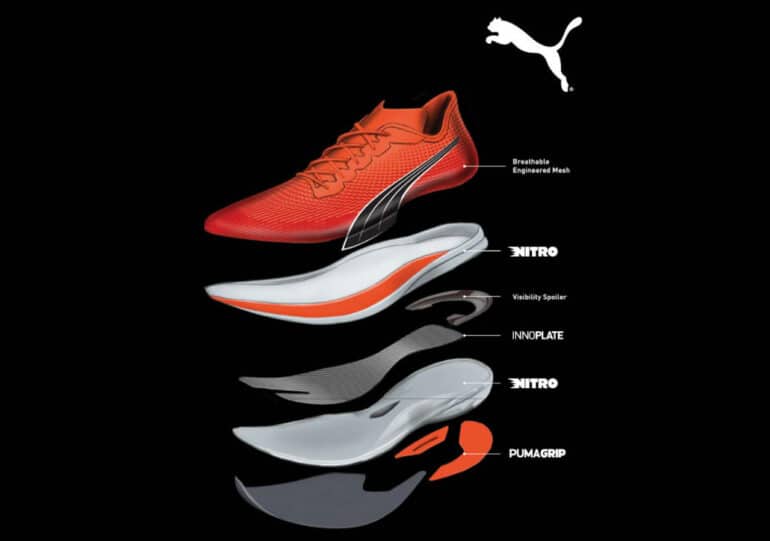 Given that I’ve taken the shoes across a wide variety of terrain, there was always a concern as to how it would hold up over time. This was especially concerning once I realised the paint peeling on the midsole of the Formstrip.

However, my fears were misplaced, as the impact, even after three to four weeks of running at least three times per week, it has held up well. There has been no drop in performance, no softening or hardening of the midsole. Similarly, the upper has also kept its shape and flexibility, continuing to support your feet while in use, stopping it from sliding around or slipping. 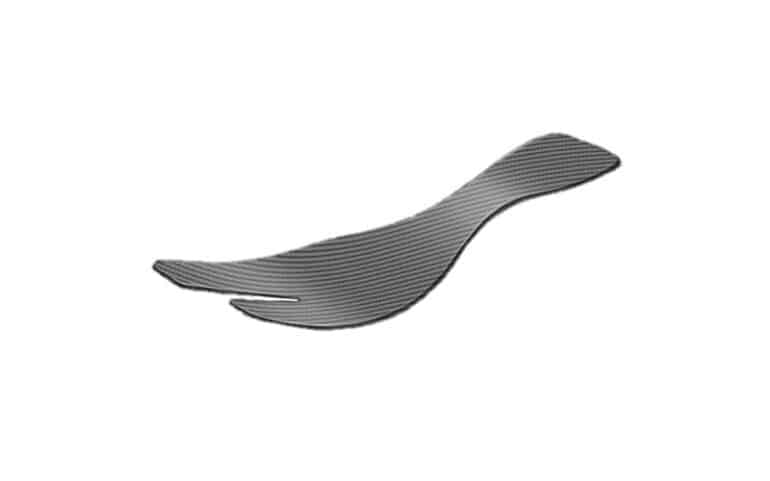 Over the past three years, I’ve reviewed quite a number of sneakers. In that time, I’ve also experienced many of the performance shoes as well, mostly for running. Each of them has its own strengths and weaknesses. In the PUMA Deviate Nitro, however, it offers a far more balanced approach offering a fair middle-ground on performance and comfort over longer or shorter distances.

Being able to pop it on whenever I’m ready to hit the road is a great feeling. And knowing that I won’t feel as much strain on my body the next day in an attempt to gain some performance is also a calming factor. The PUMA Deviate Nitro is the first carbon-plated shoe I’ve experienced that isn’t all about speed, throwing caution to the wind to make those gains to reduce your best times. And this is something that, as a daily runner, I can appreciate.

The PUMA Deviate Nitro retails for R3,999 and is available online at PUMA.com, as well as at PUMA stores.

It’s also widely available at retailers across the country, so it’s not difficult to get your hands on a pair.

If you’re looking for a new daily runner that’s going to add performance gains without the additional strain on your body, the PUMA Deviate Nitro should be an easy choice. Its balanced approach makes it easy to pick and go as a daily runner across varying distances and even different terrain.