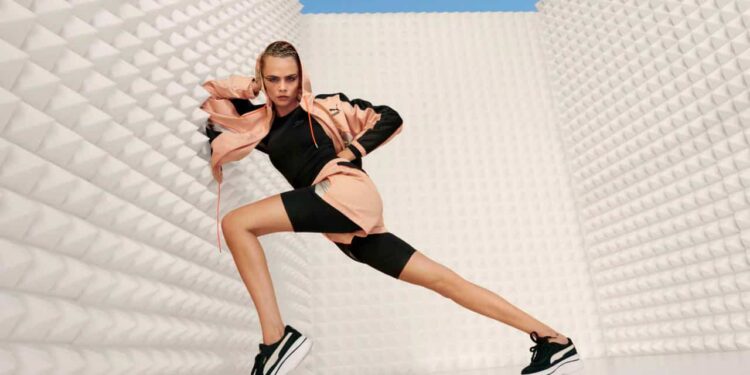 PUMA is taking street style to the next level, partnering again with PUMA ambassador Cara Delevingne for the drop. Having recently been involved with the launch of the PUMA Rise, the brand is taken it to new heights, almost literally, with the drop of the PUMA Deva Suede and PUMA DEVA 90s POP.

The two latest silhouettes to the PUMA lineup both feature raised platforms, designed for women who don’t just step out with a whimper, rather kicking down the door. The first of the two drops, the Deva Suede, features a stylishly stacked midsole, along with a luxe material blend to create its disruptive look. As the name suggests, the upper features silky-smooth, premium suede for a classic-looking PUMA sneaker. The silhouette includes a rubber outsole for extra support while you walk for traction and grip thanks to its wavy tread. The midsole in white is contrasted against the PUMA black suede, again contrasting against the Formstrip in white.

While the Deva Suede features a monochrome look, the Deva 90s Pop is far more flamboyant with its bright colours inspired by the trend of chunky, oversized shoes. The sneaker is based on classic PUMA designs, with modern touches to take it from the past into the future of fashion. The 90s Pop features the same rubber midsole with a lot more colours featured. The upper is created from premium leather, as it gets loud, wavy and colourful with glitter accents – a metallic PUMA logo on the tongue and glitter PUMA No. 2 logo on the lateral side.