The PUMA Calibrate Runner is the start of a new era 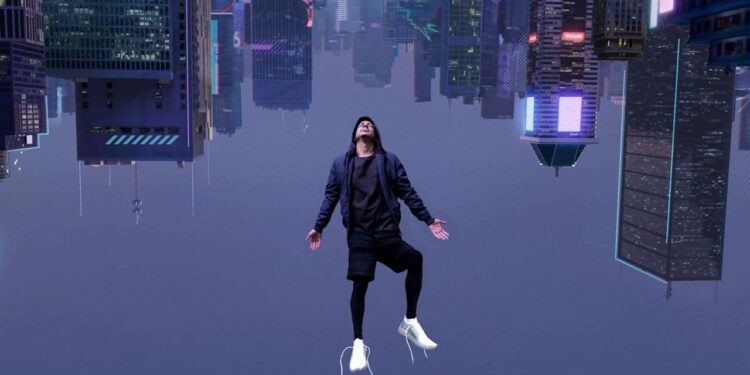 “Born in the lab, made for the streets.” This is the slogan for the recently released PUMA Calibrate Runner.

The sneaker is one of PUMA’s most technologically advanced sneaker to date. The XETIC technology, the most advanced midsole the brand added to any sneaker, was a collaborative effort between PUMA and Massachusetts Institute of Technology (MIT) Design Lab. The end result is a sneaker that has been designed for comfort first by means of the ultra-cushioning tech.

Despite the sneaker’s cushioning advances, it’s not branded as a performance shoe. Instead, this lifestyle sneaker is an intermediary step between the lab and hitting the track. Having launch just a short while back, there’s a lot that the XETIC midsole adds to the mix. But the sneaker isn’t based on that alone. Let’s take a closer look what makes it tick, and whether there is real potential when it comes to the future of the technology. 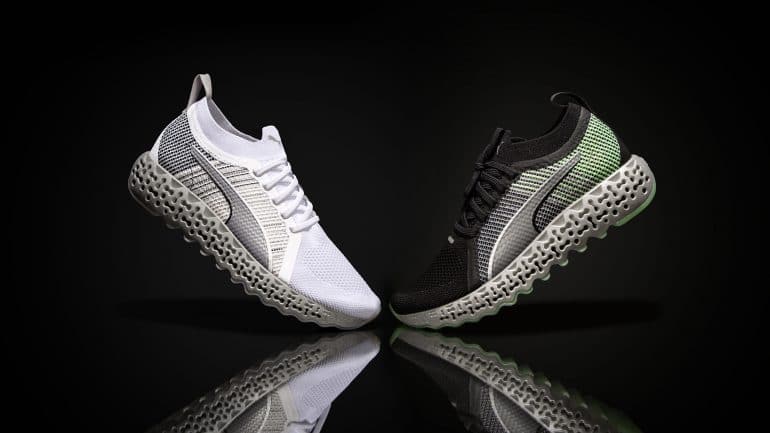 The PUMA Calibrate Runner features a very detailed design. In the description of the upper for the sneaker’s launch, it simply states that it was crafted from a knitted material. However, there’s quite a bit more than that.

For starters, it’s only the forefoot offering the knitted finish – known as evoKNIT. The evoKNIT section extends to the non-existent tongue, thanks to the sock fit. The collar is also knitted but with an elastic finish. The entire knitted section is featured in PUMA White, extending to the laces.

The second portion of the upper is made of a plastic mesh material. It’s stitched together to make a robust, flexible section. The flex, however, is limited to the lateral movements within the shoe, but not when it comes to it bending vertically. It’s a bit more rigid in this regard.

The collar also features one of only two PUMA logos. The second has been added to the heel, below the tab. It does, however, feature four prominent Formstrips on the lateral and inner sides. It’s added as an overlay on the mesh. In keeping with the grey look of the mesh, the Formstrip has a reflective grey finish.

The XETIC midsole also has an element of design to it. Yes, this may be as a result of the way the foam was crafted, but it’s unique and definitely worth discussing. The XETIC foam has a construction which includes quite a significant number of holes in it. These holes are cutout in the form of infinity (or “8”) symbol. These have been spaced specifically for the amount of cushioning provided back to the wearer but adds some flare to the design.

Overall, the design is great, with a lot of details you wouldn’t notice by viewing images online. The mesh doesn’t have a standard finish. It has an angled, linear cross-section, which offers breathability every second line. This extends from the midfoot to around the heel counter. It also fades from white to black (from front to rear), which creates a grey effect.

The spacing of each of the lines creates sufficient airflow to your foot on the inside, without allowing too much draft through. The evoKNIT upper also adds to the ventilation.

The extra ventilation provided by the PUMA Calibrate Runner keeps your foot cool under any condition. Even with a thick pair of socks in the summer heat, you wouldn’t really notice any sweat build up. The fabric sock liner also adds to the cooling of the foot from the bottom up. 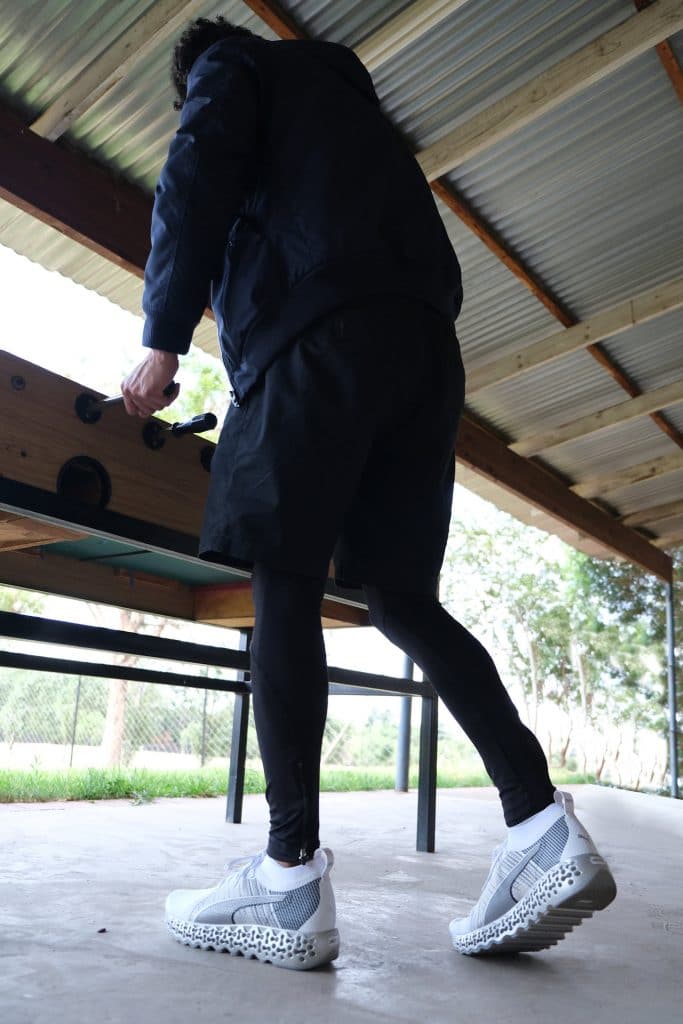 The PUMA Calibrate Runner was always going to be about comfort. That’s the first step in the way to making a great performance shoe. The XETIC midsole does its job, with great aplomb.

Upon climbing into the sneakers, I could feel a significant difference. As with many performance runners, the shoe rides high. A result of the XETIC midsole. The cushioning provided, however, is also the result of the XETIC midsole. It’s insanely good. Standing on one foot and pushing down, you’ll feel the spring-like effect of the foam working. Irrespective of the load you place on it, you’re bound to get the support and cushioning you require.

The evoKNIT upper and mesh support, provide a tight fit. That doesn’t mean that you’ll require a shoe one size larger This s by design. Tight may be the wrong term to use in this instance, with ‘snug’ a more operative description.

The sneaker gives way where you need it most, stretching and flexing as you move. I mentioned previously that there isn’t much vertical flex provided by the mesh but it doesn’t need to. The XETIC provides all the flex you’d need underfoot that your foot remains stable on the inside.

I would, however, recommend thick socks. Especially true when it’s new. The section where the mesh meets the start of the lacing lines up with the knuckle of the big toe. As a result, the bend of my toe rubbed up against it at a higher than walking pace. This caused friction, resulting in a small blister. Once worn in, you should be comfortable switching back to thinner socks.

The levels of comfort provided are next level for the PUMA Calibrate Runner. You could easily spend the entire day walking around in them without noticing they’re on. 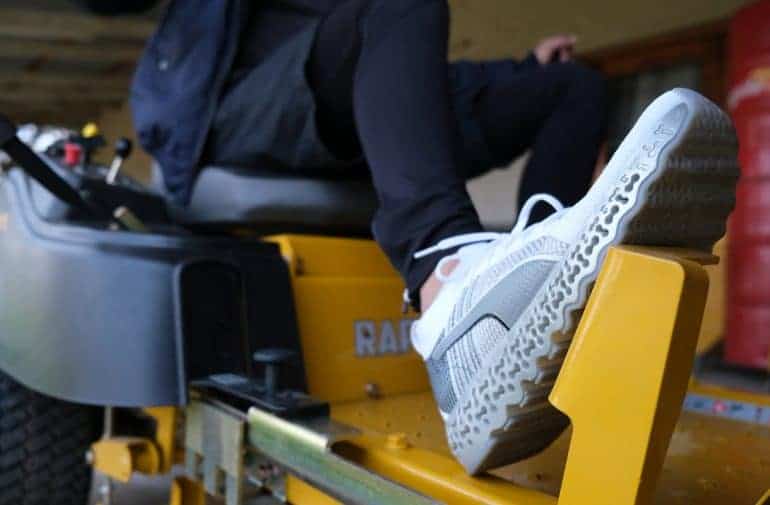 I tested out the PUMA Calibrate Runner in a series of different operation modes. The standard is obviously walking. With a few extended walks about town, the sneakers performed really well. Ventilation was great and so was the rebound to provide the support you need.

Being a bit on the heavier end of the scale compared to streamlined running shoes, I didn’t know what to expect when it came to running. But my thoughts were eased when I took a leisurely jog wearing them. It gives way and drops as you put more pressure on the various points, protecting your foot from the impact zones. With the XETIC technology running from the front to the rear as a single entity, it doesn’t matter if you’re landing on the heel, as with long-distance runners, or the front foot, as with sprinters.

But that’s not where the Calibrate Runner performs its best. That lies in activities such as your daily exercise routines, HIIT workouts, hitting the gym, or jumping around at home. The immediate rebound provided by the midsole means that you won’t be slowed down by any impact. The result of which removes a lot of the strain on your ankles and further up your leg.

The insole isn’t as thick as with other long-distance shoes. As a result, I’m a bit weary to recommend these as such, as I didn’t do any longer runs. However, the tests I did was sufficient for me to understand the technology and the direction the brand has taken with the newly manufactured technology.

There’s a lot of potential that lies within the XETIC foam. The levels of cushioning and support provided is evidence of that. 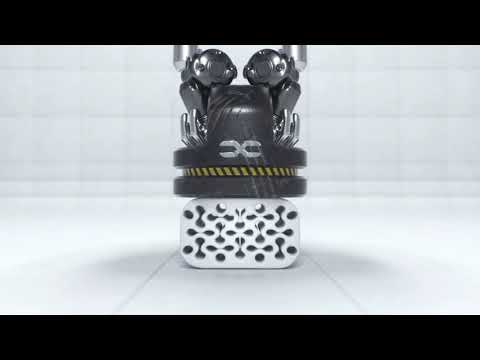 The PUMA Calibrate Runner falls under the performance category of PUMA sneakers. However, with the XETIC midsole in its infancy, the sneaker has not been branded as such. The brand has been keen to stay clear of boasting of any advances and breakthroughs when it comes to any athletic gains. This is a sensible move.

The sneaker ushers in a new era for the company. With many more testing and developments to go, there is great potential left from the technology. For now, the PUMA Calibrate Runner is branded as a lifestyle sneaker, retailing for R3,300. It does, however, offer the added option to upgrade your regular routine with performance activities without any added strain.

PUMA South Africa provided a pair of the sneakers to Fortress of Solitude for the purposes of this review.

The PUMA Calibrate Runner is a beautifully crafted and comfortable sneaker. The rebound and support provided by the newly designed XETIC technology marks the start of a new era for performance shoes.