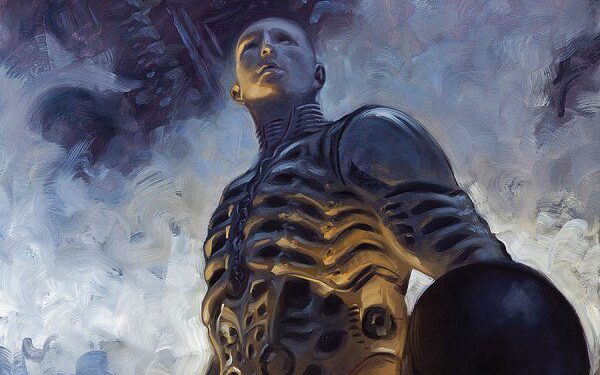 It continues the story of Captain Paget and her crew. They are no longer on the Weyland-Yutani-owned planet where they were ambushed by the Predators. That doesn’t mean all is safe in space… The crew is split up. Captain Paget, Morimer, and others are on the Hasbrudal vessel while Sargent Roth and his men are on the mysterious xenotech vessel trying to re-establish comms with Paget. As established in Predator, the Colonial Marines have no idea what to expect to find in the vessel, which terrifies them. That same sense of uncertainty and fear is a continued presence here. This is only amplified by the lack of communication between the two vessels. After a brief back-and-forth between the characters abroad the Hasbrudal, the focus shifts to the proceedings in xenotech vessel. We find Roth and his men who are still in mourning for their fallen comrades. As they explore the ship looking for a way to reestablish communications with the Hasbrudal, they make a shocking discovery and chaos ensues.

That’s about all I can say without giving too much away, but seeing as the cover already spoils it, it’s safe to say that the discovery they make is an Engineer, which the “angry god” in the title refers to. The story is pretty basic. Prometheus: Life and Death #1 begins with a sort of epilogue to the previous series, continues with a prologue to kick off this series and is taken in a different direction with a climax involving a new threat. Unlike the previous series, which was very reminiscent of the original Predator movie, this one embraces a new and unique direction where the characters actually grow and stand out from one another, and rather embraces familiar Alien territory. There are clear, distinctive personalities here that are accompanied by a fresh new tone. For me, the Marines fit much better in a sci-fi environment as opposed to the jungle environment from the previous series. As for the visuals, Andrea Mutti takes over from Brian Theis, which isn’t bad considering the subtle changes in the visuals benefits the change in tone. And the changes are really, really subtle. Mutti takes the vague approach, relying less on detailed character designs and environments and more on shock-value visuals that really stand out on the washed out backdrops.

As expected of the first issue in a series, Prometheus: Life and Death #1’s ending slingshots (you’ll laugh at that one after you’ve read the comic) the characters into unknown territory which is both thrilling and frightening. I am much more invested in the characters and the story this time around, which I expect might have been the plan all along. If Predator was the Terminator for this Life and Death saga, Prometheus is Judgement Day.