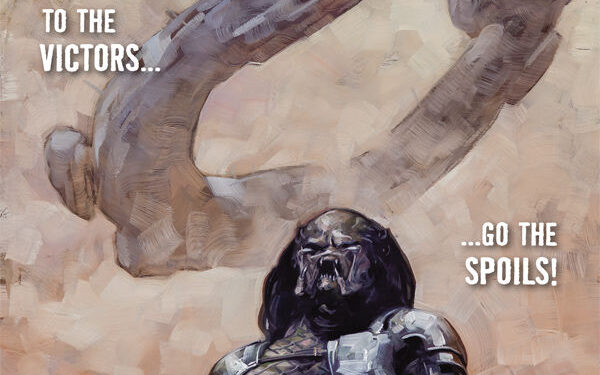 War is at the forefront in the final issue of the Predator: Life and Death series. The Colonial Marines are still split into two factions as Piaget leads a strike on ground zero in the jungle while Roth and his brutes take on the Predator attack that concluded the previous issue. This is a satisfying end to the finale, even though some characterization had to be sacrificed in order to give the final war the epic scale it deserved. [dropcap]A[/dropcap]fter the eventful and fantastic third issue, Life and Death had a lot to live up to. Needless to say, the final issue never quite reaches the level of thrills which its predecessor delivered so diligently page after page. The previous issues in this series have done an excellent job of showcasing the Predators as a mysterious force that is able to wipe out any group of beings that they come across. It was not only reminiscent of the first Predator movie, but also the main creative force that made this series exceptional.

Here, the Predators are simply an obstacle that supplies the issue with enough material to fill 24 pages. Although they do suffer some casualties, the Marines who are ambushed quickly and easily overthrow the Predators as if they were the clones from Attack of the Clones. There is no pause button in this issue to get the Marines to recollect themselves, although the writers may be saving their mourning and PTSD for the sequel series, Prometheus: Life and Death. The characters in this series hasn’t been especially colorful or interesting. Having them come to emotional grips with the recent events in Prometheus could give them the depth they need.

What Predator: Life and Death #4 lacks in story it more than makes up for in its art and layout. Instead of portraying the violence in claustrophobic windows for the sake of intensity, Brian Albert Thies rather opts for splash pages featuring entire landscapes. Not only does it minimize the significance of the Marines with all their gear and guns against the backdrop of the gigantic XT vessel, but it also places the Predators in their signature stealth mode positions, forcing the reader to play “Where’s Waldo”, only this time around the deadliest assassin known to man catches the reader’s eye instead of a red and white scarf-loving hipster.

Having already read the first issue of the Prometheus: Life and Death, I can safely say that Predator: Life and Death enjoyed a successful run which served both as a standalone series and a precursor to a much more enticing saga with Prometheus. This finale did what it needed to do, which is to tie loose ends and set up the sequel, but this series clearly peaked in the middle of its run.