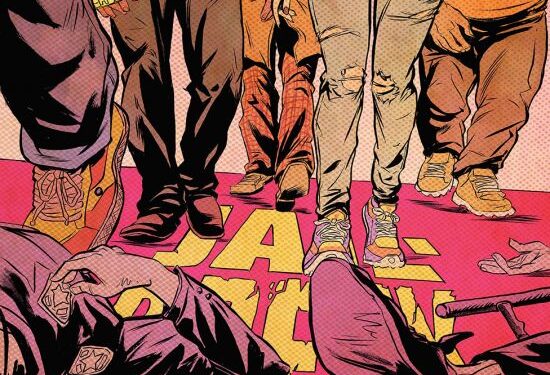 Wow! It’s another Civil War II crossover, and this one’s a gem! Then again, Power Man & Iron Fist have always been the most instantly-likable, woefully-overlooked dynamic duos in comic books. Their odd couple friendship has been one of the most enduring for fans, and while this issue may see them separated by prison walls it still highlights them as being the social consciences of the Marvel U. [dropcap]D[/dropcap]anny Rand – Iron Fist – is rotting away in jail since he was arrested for striking a law enforcement officer. Since he was trying to save some innocent people and reformed criminals from being busted under the predictive justice system, only for their police records to be hacked and altered to say that they were wanted criminals, something has to be done to fix the situation. His good friend Luke – Power Man – reminds him that he has enough money and clout to be released, but Danny’s sticking by his principles and taking a stand.

Outside the prison, Luke has to solve the mystery of how the police records are being altered. Senor Magico and Gadget debate computer hacking and magic, while Luke struggles to decide if he should create a jailbreak to rescue his friend. Torn between doing the wrong thing for the right reasons and the right thing for the wrong reasons, Luke comes up with a plan. Yet when Captain Marvel and her team show up to stop him based on their latest predictive justice vision, will Luke’s plan be brought to a halt before it even begins? It’s possible that you may be thinking Civil War II has run out of steam, and you may be right. But this… this issue is a winner. It’s intelligent, funny, and one of the most entertaining of the CW2 entries so far, with writer David Walker knocking this one out of the park.

Luke and Danny come across completely naturally, both as individuals and as friends. Seeing them solve this problem from opposite ends gives each of them time to shine, while the supporting characters are sometimes laugh-out-loud funny. Senor Magico almost steals the whole issue, with his bargain bin Doctor Strange routine. Despite the humour, at its core this issue still tackles the predictive justice system, making the finest argument against it yet.

It’s hard to know what else to say other than to recommend it, and the whole series. It captures the spirit of the original run perfectly while still updating it so it’s modern and fresh. If it continues at this pace, you may just find Power Man & Iron Fist becoming your new favourite heroes.