With the new console releasing later this year, Sony has revealed what the PlayStation 5 box art for their next-gen games will look like.

Firstly, the PS5 cover revealed by Sony is for the recently announced Spider-Man: Miles Morales game, which releases this holiday season. The box art features the game’s protagonist, Miles Morales, slap dab in the middle of the box.

At the top, you’ll notice that the PlayStation 4 blue gradient bar has now been replaced by a white one, which fits in with the mostly white design of Sony’s next-gen console. The PS5 logo, which Sony revealed a few months ago, also replaces the old PS4 one.

So far the responses have been mixed, with many fans commenting on how the white bar at the top is a lot more jarring than the gradient blue bar of the PS4 box art, which tends to blend in more naturally with the blue coloured box.

Whether you like the PlayStation 5 box art, it does fit in with the theme Sony is going for with their next-gen console.

Sony did announce that the PlayStation 5 will come in two versions, a disc drive-less digital-only version, which is said to be cheaper, and a second version which will have a disc drive. Both Sony and Microsoft are well aware that there is more of a push towards digital-only gaming, and it is great to see both companies catering for those who buy digital-only and those who still love their physical copies.

What do you think of the PlayStation 5 box art? 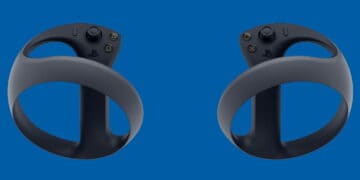