The Zombies are back and only the Plant Army stands in their way as they try to conquer the Backyard. This might sound like the premise for a bad 80’s horror film, but it is, in fact, the premise for the follow-up to a game that surprised me when it initially launched, Plants VS Zombies: Garden Warfare. 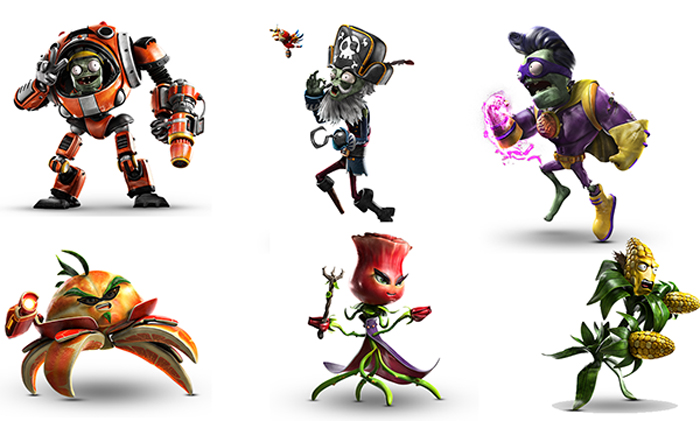 Plants VS Zombies: Garden Warfare was considered by many (including myself) as a lightweight multiplayer game aimed at the younger generation. While the latter is true, Garden Warfare proved that it is a more in-depth multiplayer shooter than first meets the eye.

For those who might not be familiar with the franchise, Plants VS Zombies: Garden Warfare 2 has the player choosing between two sides, the Zombies or the Plants, as they battle it out for domination of the Backyard. Garden Warfare 2 expands on its predecessor by adding new modes as well as six new classes, three Zombies and three Plants. Each of these new classes feels unique and fun to play.

The Zombie players now have access to the Imp, a dual wielding Zombie that is really small in stature (and low in health), but don’t let his size fool you, this little guy can summon a powerful mech. For those who like to get close up and personal, there is Super Brainz, a superhero inspired Zombie with a mean punch and kick. Lastly, there is Captain Deadbeard, who tends to prefer long range attacks or sending out his parrot to do his dirty work.

On the Plant side, players get access to Citron, a citrus bounty hunter from the future. With his defence shield and ball form, he tends to specialize in more defensive tactics. Kernel Corn, on the other hand, likes to get into the thick of things. He has powerful dual gatling guns, airstrike ability and a rocket launcher to teach those Zombies a lesson. The final new character is Rose, a magic-wielding character, who can slow down time and transform those pesky Zombies into goats.

Not only do players have access to some great and fun classes but, as with the previous game, players are able to customize their looks and abilities via cards. These cards come in packs that are bought using in-game currency. I found that these cards became the main driving force behind wanting to play just one more match, as the possibility of finding an upgrade that would drastically improve my favourite character became an obsession.

Not only do players get new character classes, but Popcap has listened to the criticisms regarding the lack of a single player mode in the original Garden Warfare. Players can now find solo options in the main lobby areas where they will receive missions to complete. These range from defensive tasks to bounty hunting missions where players have to hunt down various bosses. The main lobby is made up of Zombie and Plant bases, separated by a war zone where AI characters battle it out in order to control a flag in the middle of this zone. Players can join in this battle at anytime and can even uncover collectables and mini games around the outskirts of this zone. These AI battles are a great tool in getting players comfortable with the different character classes as you are able to switch between them freely. Although these missions and AI battles can be fun, educational, funny and a nice diversion from the multiplayer, they did start to feel a little like filler content after a while.

What does breathe new life into these single player missions, after playing through them a few times, is the fact that you can also play these as split screen co-op. Split screen co-op is also available for all the multiplayer modes. This is a welcomed feature as playing couch co-op with your friends is great fun.

There are three modes in Garden Warfare 2. Team Vanquish is a team deathmatch mode, Suburbanization is similar to Domination modes where players fight for control of specific areas on the map, and then there is Gnome bomb, where players need to secure a bomb and use it to blow up designated points on the map. I found Turf Takeover to be my favourite mode, in this mode one team needs to defend an area on the map while the other team fights to gain control of it.

The cartoon-like art style of Garden Warfare 2 is a welcome respite from the flood of gritty multiplayer shooters that is available in the market. The colourful environments and cartoonish models are a joy to look at, and the care and attention that has gone into animating each of them shows. It’s this attention to detail, for instance, how characters are animated and how unique each one sounds and feels, that makes the experience of playing Garden Warfare 2 such a delight (even if you lose).

I really enjoyed my time playing Garden Warfare 2. Not only is it a really good looking game, but I found it quite easy to get into and never felt like I was out of my depth. The game is still as fun, fast paced, frantic and sometimes even chaotic as Garden Warfare was, but therein lies its charm. With the addition of some new content and character classes, Popcap has vastly improved on the formula. The best part is that the game feels deep enough to satisfy players who are looking for a bit of a challenge, and at the same time light enough so that the younger generation can take part in its ridiculous battles.

Plants VS Zombies: Garden Warfare 2 doesn’t take itself too seriously and this just makes the game that more fun and enjoyable. Popcap has taken everything that we loved from the first game, added some improvements, threw in some new classes and mixed it all up into one really entertaining and unforgettable experience.