What the Peacemaker Finale Means for the DCEU & The Justice League 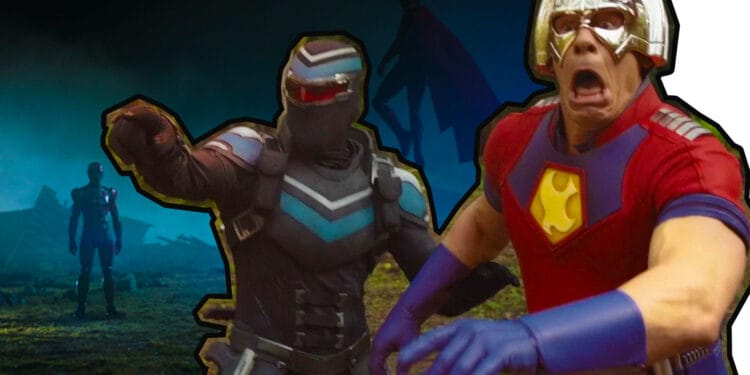 The bombastic finale ending to the first season of James Gunn’s Peacemaker answered some interesting questions about the future of the DCEU, and more importantly, what might be next for the fabled Snyderverse and the Justice League.

After an exciting first season that saw Peacemaker and his new colleagues fighting against an alien invasion, the show served as a way to establish the vigilante-turned-hero into a violent force for good – and also proved that the Justice League isn’t always as reliable as they say they are.

In the show’s finale episode, Peacemaker and his allies manage to defeat the space Butterflies that seem hellbent on their own brand of world domination. After the Justice League fails to show up on time, we got to see a final scene that shows us the current state of DC’s mightiest heroes – at least partially.

Among all the actors we’ve seen in the Justice League, only Ezra Miller’s Flash and Jason Momoa’s Aquaman make credited cameo appearances in the show. Wonder Woman and Superman appear only as silhouettes, leaving the audience to fill in the blanks about how they look like.

This presents us with an interesting dilemma: who is this Superman supposed to be? After all, we know that Henry Cavill has reportedly concluded his time as Superman in the DCEU (or has he?), so who’s that Supe supposed to be in the Peacemaker finale?

Seeing the Kryptonian appearing in Peacemaker at least gives us some hope for the future of the character, as it might be pointing at the fact that we’ll get to see more of Superman in the mainline DCEU.

Another popular fan theory seems to suggest that the Superman silhouette might be a subtle indication of Warner Bros’s intentions of altering the look of the character in upcoming movies. Knowing James Gunn’s unmistakable style, it wouldn’t have been too weird to see Supes wearing his iconic red undies in the show’s finale.

Two heroes were conspicuously absent from the Peacemaker finale scene with the Justice League, and they’re not precisely minor characters either. Batman and Cyborg are nowhere to be seen in the scene, leading to some heavy speculation about what that could mean for the Justice League roster in the future.

This was not a mistake, either: James Gunn himself has acknowledged Batman’s absence by explaining that it was a conscious decision on Warner Bros’s part. Actor Matt Turner has corroborated Gunn’s version, as he admitted that they filmed him as a Ben Affleck stand-in that was removed at the last minute.

Actor Brad Abramenko also revealed his BTS photo as Superman for the show.

Kimberley Von Ilberg was the Wonder Woman body double for the scene.

Some fans have also speculated that Batman’s disappearance from the Peacemaker finale might have something to do with the upcoming Flash (Flashpoint?) movie, where both Batman actors (Michael Keaton and Ben Affleck) are set to meet in a multiversal clash. With Keaton set to reprise his role as Batman in Batgirl, effectively taking Affleck’s place in the DCEU, it seems likely that Gunn had to remove the Batfleck from the finale to accommodate for the arrival of Keaton as the new Batman.

As for Cyborg, it’s not all too clear why he wouldn’t appear in this last Peacemaker finale scene. An easy explanation would be that he was piloting the Flying Fox: the Justice League’s aerial transport. After all, how did Aquaman reach Peacemaker’s location if he is incapable of flight?

That said, there’s also an ongoing feud involving Cyborg’s actor, Ray Fisher, and both Joss Whedon and Warner Bros. The actor has cited some uncivil working conditions under Whedon that caused a rupture between him and the DCEU as a whole. Considering the severity of the situation, it would be very likely that Fisher might not be back to his role as a member of the Justice League in the future.

So, What Does the Peacemaker Finale Mean for the DCEU & the Justice League?

Well, firstly, it means there is still a DCEU and the characters set up by Zack Snyder still remain — well, minus two. The fact that all of them still exist in their “dark and gritty” form is good news for Snyderverse fans. While the director might not be part of the next phase (although it isn’t impossible yet), Warner Bros. seems to be moving forward with the characters as they were developed (for now at least). That’s good news!

Secondly, it means Warner Bros. actually might be willing to have the Justice League show up again as a team. This little segment or Easter egg should give fans of the Snyderverse movement a bit of hope. All is not lost. The fight isn’t over. Justice League 2 isn’t that impossible.

While the Peacemaker finale isn’t the victory Zack Snyder fans were hoping for, it’s a small step in the right direction, right?

Tell us, did you enjoy the Peacemaker finale? Were you happy to see the Justice League?