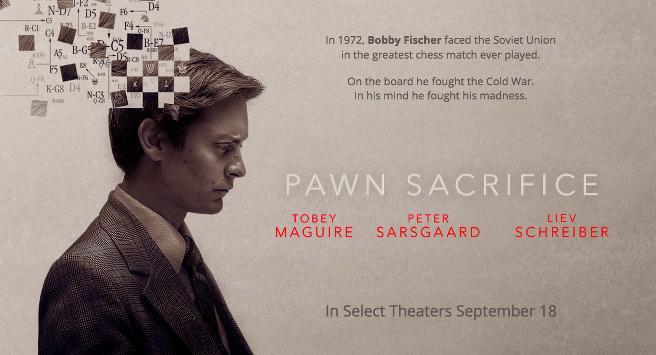 Pawn Sacrifice falls into that expanding genre of films that I would describe as “depictions of historical figures who struggled heroically but who went nuts in some ways.” 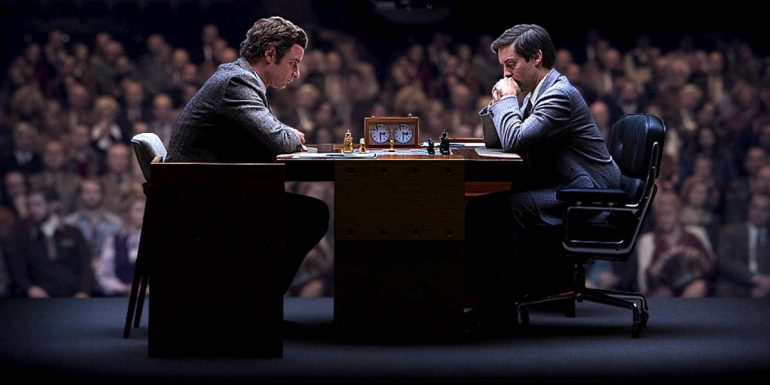 There is contained within that description all the things needed to easily make a movie: a plot already in existence (because it already happened), human interest (the strive to succeed or be heroic) and conflict (the going nuts part). However, when it comes to Pawn Sacrifice, the biggest challenge remains convincing us of the value of this movie. After all, it does just focus on chess. How compelling could that be?

Pawn Sacrifice tells the tale of Bobby Fischer (Maguire) an extremely talented yet dangerously paranoid chess prodigy. The focus of the film is on the build up to his 1972 World Championship match against Boris Spassky (Schreiber). A great deal is made to try and emphasise the political state that this match inhabited: the way any contest between the USA and the USSR was a chance for prestige, the way the USSR had dominated all chess tournaments for the previous years, and so on. This is a chess match watched by presidents and premiers after all, so it must be important.

A lot of Pawn Sacrifice is carried by Maguire in particular, who manages to capture the more manic parts of Fischer’s mental state. Schreiber functions well as an adversary, and much is made of Fischer in character study throughout the film. However, either due to focus or choice it doesn’t really delve into more of the specifics of Fischer’s mental state, which was probably because showing those aspects would have us lose sympathy for our supposed hero of the story.

The success of Pawn Sacrifice probably comes down to what age you are, and how much you care about history. As a study of Cold War conflict played off the battleground, the film can be compelling. For someone who can’t tell their Lenin from their Lennon, they might not see the point. Worth seeing for Maguire, if nothing else.