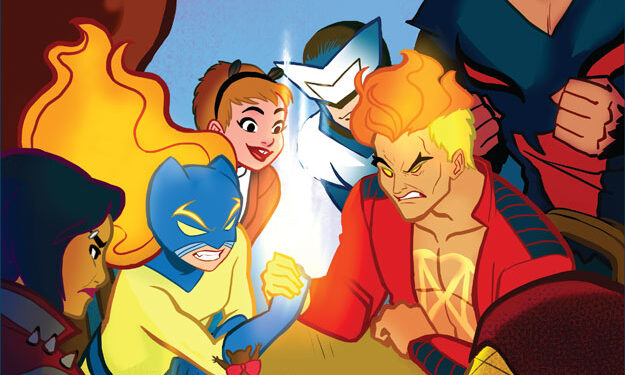 “Patsy who?” some new readers may cry out. Oh come on… you must know Patsy Walker! Why, you must remember her from the ’40s, ’50s and ’60s series, right? Patsy and Hedy… that doesn’t ring a bell? Maybe you remember her more as Hellcat from The Avengers and The Defenders in the ’70s? Or her own series from a few years ago? She-Hulk? None of this is ringing a bell?

[dropcap]F[/dropcap]ine. Okay. Have it your way. She was also Jessica Jones‘s pal, with her name being yelled out by David Tennant as the Purple Man, in the Netflix series. Right. Yes. That’s her.

And in case you didn’t get the memo, she’s also got her own series again… and it’s a dozen types of awesome. Patsy’s life has been falling apart at the seams lately. Her business has been failing, her old rival Hedy had been telling all sorts of lies about her, her good friend She-Hulk is now in a coma thanks to this whole Civil War II nonsense, and now Hedy has tricked Patsy’s two ex-husbands to come after her seeking revenge for things she never even did! Oh, and she’s been sent to hell. Or back to high school, depending on your perspective. That isn’t the best of ways to end a karaoke night at a bar.

In hell, Patsy Walker has to confront the mistakes of her past and her feelings for those in her life if she ever hopes to escape. It also requires a ruse which John Constantine probably would approve of, but since he works for another company then who cares? Back in the “real” world, former X-Woman Jubilee tries to convince Patsy’s exes that they’ve been manipulated by Hedy. Also, love finally blossoms between two other characters… and it’s about time! This series has been one of Marvel’s most unsung hits, combining the playfulness of old Archie comics with the strong character-driven emotional drama of Love and Rockets, all set in the world of superheroes. With each issue it continues to impress, and along with titles like A-Force and The Unbeatable Squirrel Girl it’s providing a true renaissance of entertaining and intelligent stories starring female characters.

Yet, like those others, this isn’t a book about female characters designed only for female readers. Regardless of the demographics, marketing and perception, the truth is that they’re about strong, well-written characters for any reader who’s looking for something good which is a little different from the standard fare. Plus the letters pages feature photos of cats and a very groovy cosplayer, so what’s not to love?

The writing in Patsy Walker, AKA Hellcat! #10, once again, is light-hearted but packs an emotional punch, and the art compliments it perfectly. It may be a little too cartoon-like for some, but it’s fun from cover to cover and that’s what counts.

And if you don’t remember that fact, then maybe you’ve forgotten more about comic books than you realised.