Outbreak Review – The Classic 90s Top-Down Shooter is Back

In the last two years, we’ve seen a fairly substantial uprising of the survival game genre. With titles such as Ark: Survival Evolved, The Long Dark, Don’t Starve, DayZ, Subnautica, Miscreated, Starbound, Rust, This War of Mine, and H1Z1: Just Survive, players have great choice of background, storyline and survival modes, whether it be all out action, or strategic planning. Having seen its rise in the early 90s, survival games become fan favourites thanks to the in-depth nature of the genre, coupled with a certain amplification of emotion as a result of playing an often lonely, isolated character. Dead Drop Studios has released a throwback to the 90s with its zombie, survival game, Outbreak. As with many games, the first moments serve as a tutorial of some sort, as players familiarise themselves with the landscapes, controls, and gameplay. This top-down approach is reminiscent of many older games pre-2000, with modern-day greats like GTA even starting off as such. Safe to say, then, that many older gamers will have a firm grasp of game mechanics. That said, the tutorial phase of the game is somewhat slow, as you wander around a poorly lit hospital searching for clues, while filling your inventory with healing salve and ammunition. This already would already create some tension in most players, as you’re fairly certain there should be zombies about, but not many, if any, appear for the first 10 to 15 minutes of the game.

This soon turns, and you’re faced with an unending onslaught of zombie hordes wishing to eat your brains (assuming they’re the default zombie-type according to my handy zombie apocalypse notebook). You’ll learn how to manage your inventory, when to administer some of the healing objects, and even barricading yourself from a threat to deal with one influx of zombies at a time. 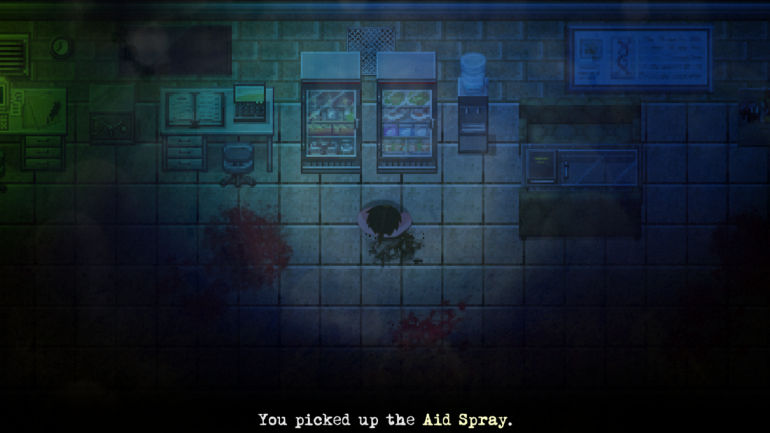 Another element straight out of the 90s is the default single player mode, where players choose between four different characters, each with their own advantages over the next, depending on your style of play. Unlike some of the titles from the 90s, there is some thought behind each of these characters. For example, choosing Alendra will provide you with an basic keycard, which allows you to enter most of the locked areas in the game without needing to find the keys first, although she’s more susceptible to taking on damage when the zombies attack. Then you have Mason, who automatically carries around a gun, which is a permanent feature and takes up no space in his inventory, apart from the ammunition. While you’re able to play the game solo in single player mode, the game was designed to be enjoyed with friends, or the online community in multiplayer mode.

Outbreak is a tough game in all modes, and becomes a mixture of difficult and frustrating when choosing the harder difficulty modes. Some of the elements that make the game tough is characteristic of the top-down shooter, having to rotate your character 180 to turn back the other way, as moving backwards is too slow, and the limited room makes it impossible to turn while moving forward. Reloading your gun puts you in immediate danger of attack, and with supplies, mostly ammunition, are very scarce. The controls at times can be a bit sticky, as you often find yourself looking back down at the keys to make sure you’ve not done anything wrong. And in a game like this, every second counts. This isn’t the only bug, however, as there are loads scattered throughout the game. It’s not enough to incapacitate the game, but has a somewhat higher count than the inevitable one or two you’ll find in most games. Another aspect I find frustrating about the game is its inventory menu. I don’t mind the fact that the game is continuous even while searching through your inventory, but there are far too many actions that require a dive back into the bag when there are zombies about. Unlocking the door, using your healing, switching guns, all require manual intervention of some sort. This becomes frustrating even if you have the supposed safety of your teammates in multiplayer mode. This becomes even more frustrating coupled with the fact that there are no checkpoints within each map, as dying at any point means restarting at the very beginning. You don’t retain any items either once used, which adds more to the difficulty of the game than something poorly designed.

There are still a few top-down titles around on, such as Frozen Synapse, but Outbreak has feel of a 90s game through and through. It almost feels like a cross between DreamWeb, Silent Hill and (original) Resident Evil rolled into one, although not quite as beautifully put together. With a few updates, some of the quirks and bugs could become less of an issue, but there are still quite a few annoyances that may remain, which may just become an appeal factor for the game. That said, Outbreak is worth a few hours of your time on a weekend, but, for me, not enough to convince me to spend a lot more time online in the community coming back weekend after weekend.

A Guardians Of The Galaxy Game Is On the Way