Over the years, I’ve amassed quite an extensive library of data. This includes some 20 years of photos, Steam file backups, nearly 100GB of varsity work, general research, work email backups and multitudes of other data. With some 30TB of data to manage, it can become a little tricky.

While most of my required data is readily available on SSDs and portables, there is still a few others backed up to 3.5” HDDs. Many of these were gathering dust. That said, I would always have the odd need to access those drives. This isn’t an easy task. Having multiple portable enclosures also isn’t very efficient. This is where the Orico HDD and SSD Transparent Docking Station comes in.

The Orico HDD and SSD Transparent Docking Station offers dual support for both 2.5” and 3.5” drives. This is one of my favourite features. The design is simple and easy to use. All that’s required is to plug in the adapter to a power source and the USB cable to your PC. Now you can plug in any HDD or SSD you require. All it takes is a click of the power button.

Whenever you require to add another drive, simply unmount (in Windows) and power off the Orico HDD and SSD Transparent Docking Station. You can then simply pull out the one drive and plug in the next. No complications with cases, screws and the likes.

Using Linux and other operating systems, it’s even simpler with hot-swap support. Measuring just 78x60x145mm, the unit is fairly small. It also weighs next to nothing, making it an easy device to transport wherever you go.

In addition to its portability, the device also comes with a few safety features. This includes current and voltage protection, heat and cold protection to name a few. It’s also shock-resistant, making it durable during a fall.

With support for a variety of drives, there are many options when utilising the Orico HDD and SSD Transparent Docking Station. It supports drives of up to 8GB of storage. It also has up to 5Gbps transfer speeds thanks to its USB3.0 support. 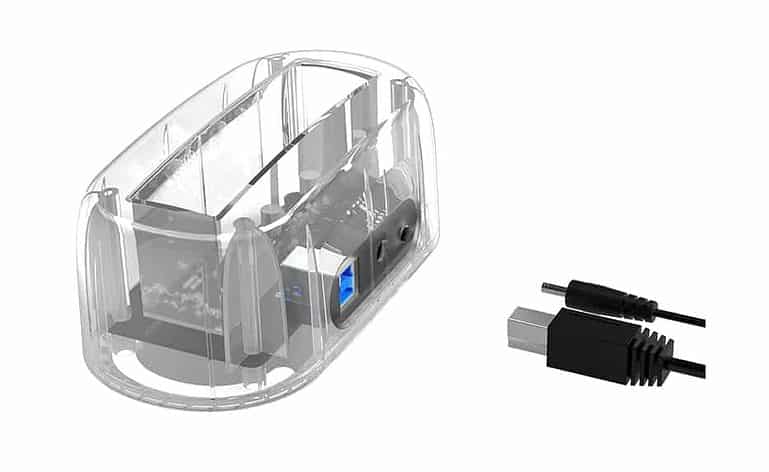 The design is also a standout feature for the docking station. With the transparent build, the inner circuitry is exposed. I love this simple but effective design. There is also a blue LED light to indicate power to the device, which adds to the sleek look.

In addition to the Orico HDD and SSD Transparent Docking Station for review, the Syntech team also included a few added options to test from the ecosystem. This included the Orico 3.5 HDD Enclosure and the Orico 4 Port USB-C to 4xUSB3.0 Hub:

The Orico 3.5” HDD Enclosure is a portable device for 3.5” HDDs. It’s a fairly straightforward device, whereby you connect your HDD and close the casing. Once enclosed, simply plug it into the power source, connect the USB cable to your PC and power on the device.

The enclosure has the same transparent design as the Orico HDD and SSD Transparent Docking Station. The transparent nature makes it aesthetically pleasing with a blue LED light to indicate power.

Users don’t require any tools, though. The enclosure has a slide cover, which clicks into place once closed. I was sceptical the device would hold in place once the drive was inserted, but not once was this a factor during the review period. There is also a stand to support it standing upright, which also aids the device itself from opening if there were any remaining doubt.

The Orico 3.5” HDD Enclosure also supports 5Gbps transfer speeds but supports HDD capacities of up to 12TB. The unit carries a retail price of R349 but may vary from store to store. 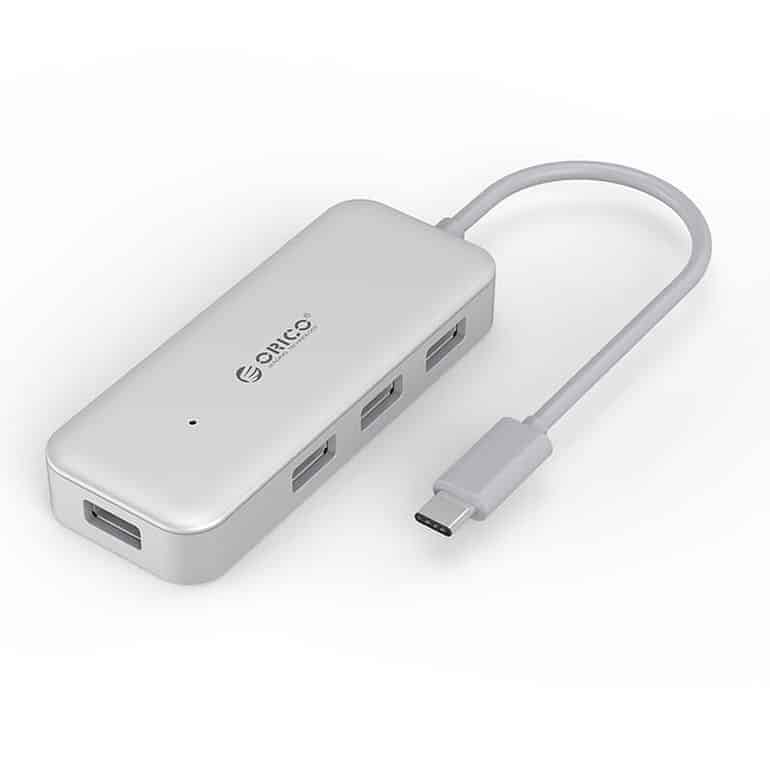 With many Ultrabooks aiming for sleek and thin designs, there’s always a trade-off on the number of ports it can houses. Typically, modern Ultrabooks will include just the basics, an Ethernet port, one USB3.0 port and one USB3.1 Type-C port. This isn’t very useful to many users on the go, which is why the Orico 4 Port USB-C to 4xUSB3.0 Hub is the perfect solution.

The unit has a USB Type-C power source. There aren’t too many Type-C powered peripherals just yet, which means it can be used to support the expansion of USB ports.

With the Type-C cable, it can also connect to your smartphone and tablets with OTG support. Simply plug it in and it’s powered on, ready to use. With the USB3.0 support, it features speeds up to 5Gbps for fast transfer speeds.

The unit is super small and lightweight. It measures 98x39x16mm and weighs just 80g.

The Orico HDD and SSD Transparent Docking Station retails for R349, which is a cost-effective solution for your storage needs. The easily swappable support makes it very efficient. And its lightweight build makes it ultra-portable. For those looking for additional drive support, there is a dual-dock variant available as well.