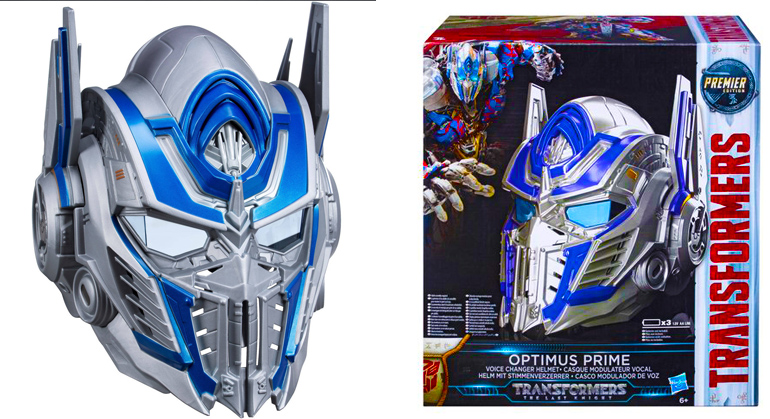 As a kid who grew up in the 80s’, I’ve always had a special place in my heart for the Transformers franchise. I still remember building an Optimus Prime helmet and suit out of old cardboard and fighting imaginary Decepticons, while losing most of my home-made armour in the process. Thankfully, Hasbro has made it much easier to feel like the great Optimus Prime, thanks to the newly released Optimus Prime Voice Changer Helmet based on the new Transformers: The Last Knight film. I still don’t know who was more excited when the Helmet finally arrived for review, me or my five-year-old daughter.

Initially, I was concerned that the helmet might be a bit flimsy and wouldn’t be able to stand up to the everyday hazards associated with being the leader of the Autobots, or being worn by kids. After removing it from its packaging though, I am happy to report that it is surprisingly sturdy.

The helmet itself consists of two parts: the main helmet that houses the voice changer unit and a separate segment which attaches to the back of the main helmet. Even though the helmet completely envelops the wearer’s head it never feels claustrophobic. Thanks to the opening at the back, it doesn’t inhibit movement as much as you would think. On the inside, you’ll find a set of plastic straps which can adjust to fit most kids and even some adults (or as I like to refer to myself, a kid at heart). Where most masks and helmets aimed at kids tend to sometimes feel uncomfortable when worn, the Optimus Prime Voice Changer Helmet overall felt rather comfortable (once I adjusted the straps a bit). I tried the helmet on my daughter, after her insistence that she also gets an opportunity to be Optimus Prime, and she wore it with no problem at all. 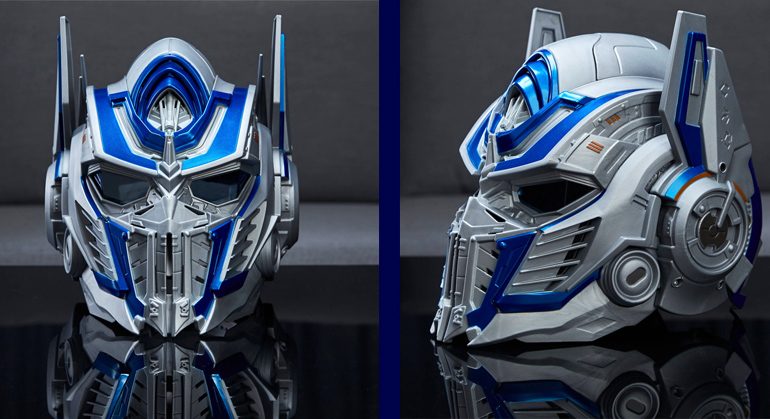 Now, while the helmet feels quite comfortable, the question remains, “Does it look the part?” As mentioned, the overall build quality was surprisingly durable with the plastic material having just enough flexibility to not break when dropped or when the wearer gets a little too enthusiastic about fighting Decepticons. Hasbro should also be commended for the amount of detail on the Helmet, such as the little Cybertonian symbols (at least that’s what I think they are), and the vent detailing that adorns it. The paint work consists mainly of accents of blue, orange and grey, with the plastic material’s natural grey colour covering the bulk of the helmet. There are some spots where the paint wasn’t applied perfectly but, for the most part, it’s done rather well.

One of the most defining features of Optimus Prime throughout the history of the franchise has been his booming voice, having been voiced by the great Peter Cullen. Even after all these years, I still get goosebumps when I hear Optimus Prime say “Autobots roll out”.  So, did I get the same goosebumps when speaking those iconic words through the voice changer? Well, keeping in mind that voice changers can only do so much, this one does make you sound like a robot. Does it make you sound like Optimus Prime? It gets close, although it’s not perfect. For a kid (or kid at heart) who wants to be Optimus Prime for a while, it does the job admirably. I also appreciated the fact that the voice changer speaker is adjustable so it feels comfortable and works perfectly when worn by both adult or kid. 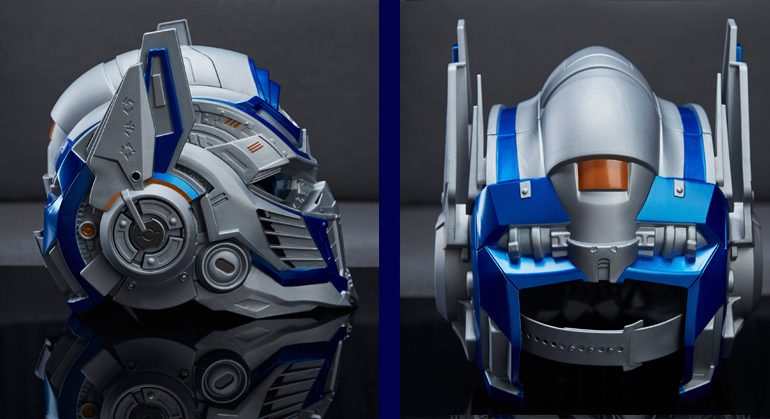 Along with the voice changer function, the helmet also has the ability to playback various sounds. These include sounds and phrases spoken by Optimus Prime and my personal favourite the “robots in disguise” guitar riff.

My only complaint is that I would have loved if the helmet had some sort of illumination function even if it were just a few flashing lights strategically placed on it.

Overall, I really love Hasbro’s Optimus Prime Voice Changer Helmet. It looks good enough to stand side by side on the shelf with my other collectables but is sturdy enough for my daughter to play with. Whether you’re a kid dreaming of being Optimus Prime or an adult who’s still a kid at heart, this helmet will have you shouting “Autobots roll out” in no time.