Odyssey Of The Amazons #6 Review – A Jumbled Sloppy Mess 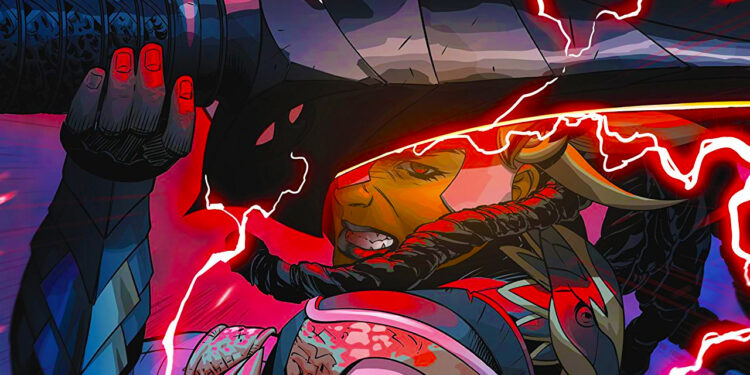 It’s the final instalment of this series, and it’s fair to say that Odyssey Of The Amazons #6 does try to go out on a bit of a high note. The narrative descriptions are a far better quality than in previous issues, in general the art is better, and the story does succeed in wrapping things up. It just isn’t very good, and the end result is a jumbled and rather sloppy mess that’s almost as ugly as the cover. With their kidnapped sisters having escaped from the Jotuns, the Amazons are finally reunited. Yet their biggest challenge awaits, as they must confront Groa and her hybrid army who are set to wage war on Asgard itself. Beyond that fight lies another with the demon Surtr itself. But will the assembled celestial goddesses intervene, bringing new insight to the Amazons who have fought so bravely?

The defeat of the Jotun hybrids is anticlimactic. After issues of buildup, they simply fall apart. They aren’t defeated by Amazon strength, but by simple bad luck of genetics. Groa is beaten with very little effort too, while Surtr puts up so little fight that you’ll wonder why the Asgardians were ever worried. The appearance of the goddesses would, you assume, at least lead to some massive moment of storytelling genius.

Instead, the big reveal from them is that this whole “odyssey” has been because… well, because they needed to learn who they are. For a comic book that was presumably intended to highlight the skills and courage of the Amazons, this series has done nothing more than depict them as squabbling bunglers who only manage to survive by being lucky and/or angry. They can’t even decide to save the world without bickering first. There’s been no character development, and it hasn’t even been worth learning their individual names because they’ve all been bland.

Given that an entire platoon of Amazons died on a fool’s errand and the fate of the world was intentionally put on the line, just to learn that it was essentially an Amazon self-help seminar for a handful of cretins… it’s worth getting angry about as a reader. In fact, the leader of the Amazons feels the same way upon finding out, and she promptly throws a hissy-fit which destroys the balance of the universe. But it’s okay. The goddesses, despite all earlier dire warnings about potential universal doom, let it slide.

And that’s it. If they don’t care, then why should the reader?

The problems with this series have been there since the first issue, and they’re still there at the end in Odyssey Of The Amazons #6. This series had so much potential but has been a constant let-down, and the only good thing about it is that it’s now over.