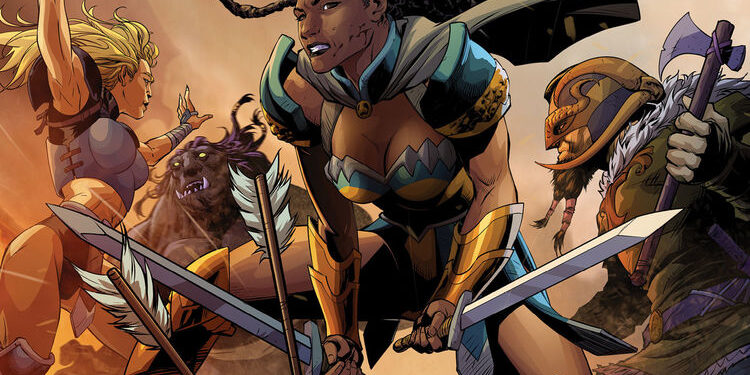 With the Amazons under attack from trolls as they continue their quest to rescue their kidnapped sisters, things look grim. They’re in a strange land, are already beaten and demoralized by the harsh elements they’ve had to endure, and stand little chance of victory. Thankfully, the Viking warriors of the land are on hand to help them, but forming any sort of an alliance with such men will be difficult. We review Odyssey Of The Amazons #2. While their leader Hessia makes peace with Jon, the leader of the Vikings, the in-fighting amongst the Amazons and the two forces differing views on the role of women may be their undoing. And ahead of them lies the real battle, one to be fought against the giants of Jotunheim…

Odyssey Of The Amazons #2 continues in the same vein as the first issue, making similar mistakes regarding the confusing lack of unique characterization of the Amazons. Aside from Hessia, it’s hard to identify any of them and what their mindsets are, even despite the clear physical differences. Which of them is backing Hessia, and what were their names again?

Something similar can be said of the Vikings, who seem to be stock characters who have no concept of warrior women, which is always a matter of debate. Any potential to explore that, along with problems between the two groups regarding language barriers and their cultural differences are either ignored completely, made light of, or play out in predictable ways. However, some of the more pretentious writing of the first issue is thankfully jettisoned here. Not only that, but there are genuinely entertaining moments at times. The story itself is questionable, but there’s also a moment where one Amazon echoes the readers’ thoughts of what sense it makes to sacrifice a hundred Amazons (so far – presumably the body count will rise in later issues) to rescue seven.

It’s one of those common sense moments which other comic books should address from time to time. Unfortunately, since we didn’t have any connection with those who died, it’s hard to sympathise with them or view them as anything other than cannon fodder in the story.

What you’ve got here is a book of two halves. For every negative, there’s a positive, but it’s still a better balance than the first issue. Oddly, one of the best things going for it is the unfamiliar territory this series is expanding in to. It’s hard to see what the final grand plan of the story is, and if you’re continuing to pick up this title then you’ll be happy to know that the outcome isn’t clearly signposted.

There are flaws in Odyssey Of The Amazons #2, but there’s also some clear hope that they can be overcome. This may not be the best of the Amazons and never will be, but it’s improving and may just stand tall at the end.