Odyssey Of The Amazons #1 Review – A time before Wonder Woman 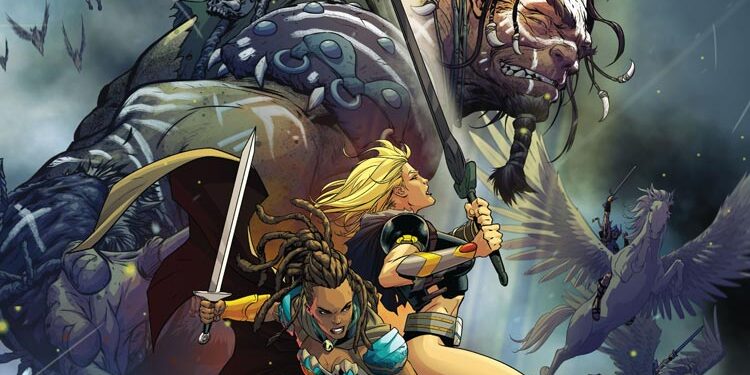 Before the time of Wonder Woman, the Amazons made their presence known across the world as one of the fiercest fighting forces ever. For an army of these warrior women of legend, their quest is to scour the globe seeking out their immortal sisters and unite them. Their battles are long and bloody, yet they also try to bring peace and understanding to those they encounter. Yet for some, their quest seems more like a fool’s errand and they grow weary of being away from home for so long. We review Odyssey Of The Amazons #1. With morale flagging, the kidnapping of several of their young warriors divides them even further. Some wish to turn back, but their leader is determined to rescue them from the icy lands of Jotun…

There’s never been any doubt that the Amazons of the DC Universe could have their own comic book. After all, with a history rich in mythology and a culture of being both warriors and peacemakers, the story possibilities for them seem infinite. DC’s Marvellous competition has done it for years with their many tales of Asgard, so what it really boils down to is how good the creators can make it.

Sadly, the answer is that it could have been better. A first issue can be a tough nut to crack in terms of setting up the characters and the world they inhabit. To instantly get the readers emotionally invested in what’s happening, it’s awkward. The premise here is intriguing, but the story is quickly overwhelmed by all the new bland characters and a lack of focus. Despite their diversity, with so many names and conflicting attitudes being thrown at the readers nothing really sticks. There’s the headstrong leader, the hothead, the artist, the samurai, the advisor, the newcomer, the other newcomer, the one who looks like a Valkyrie, the one who complains…

But what were their names again? Who are they, and why should we care? Then there’s the narrative of the whole thing, written like an ancient saga along the lines of Homer’s Iliad or The Odyssey. Which would be fine, if it didn’t come across as somewhat pretentious because of the language used. The same can be said for the dialogue, which seems too cluttered for its own good. Plus, there seems to be a strange routine of some heavy-handed word being plucked from a thesaurus and then over-used for the next several pages, before another one comes along to repeat the process.

It isn’t like Odyssey Of The Amazons #1 is bad, it’s more a case of being its own worst enemy. The art is good, and if the writing had a lighter touch then it would have flowed better. Unfortunately, it results in an issue which feels more like an unrewarding effort to read, as opposed to an enjoyable saga.