Home > Movies > Is Nu Metro’s Pantheon One Of The Top Cinemas In South Africa?

Is Nu Metro’s Pantheon One Of The Top Cinemas In South Africa? Nu Metro cinemas have a little over 20 different complexes across South Africa, which makes up the 2nd largest distribution with roughly 30%. We attended a screening at Nu Metro’s Pantheon theatre at Emperor’s Palace, Johannesburg. How does it compare to the average cinema experience and, moreover, the top cinemas in South Africa?

Situated a stone’s throw away from South Africa’s busiest airport, O.R. Tambo, Emperor’s Palace houses six Nu Metro theatres with a collective of 1130 seats. Each of the 6 theatres includes digital and RealD 3D projection. The digital 3D is amongst the best I’ve experienced around the country. Furthermore, the surround sound quality (Dolby Digital SR Speakers with 5.1 channels) is also of the highest standard, which is even more impressive considering the size of the venue.

Being situated within Emperor’s Palace means that there are many other activities to participate in, before or after having watched a movie, which may or may not be ideal. For example, over the holiday season, it’s almost guaranteed that there will be an additional influx of visitors to both the theatres and to its surroundings, which adds time to finding parking and queuing for tickets and snacks. So be sure to leave even as much as 45 minutes earlier than you usually would for your screening. 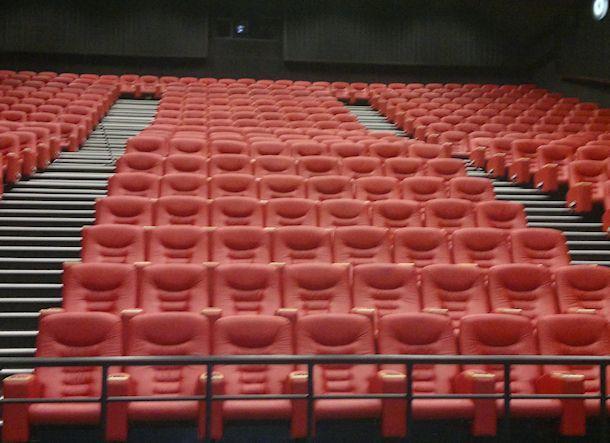 In addition to its digital and 3D projection, the Pantheon has 524 luxury Privé seats covered in leather, with an additional 8 wheelchair spaces. You don’t quite get the same personalised experience as the 48-seater Cine Prestige, but there’s no faulting the seating arrangements when compared to traditional venues and also has less chance of being sold out during opening weekends.

In addition to the luxury seating within the theatre, the waiting areas surrounding it also have luxury seating in the form of leather sofas, almost separate from the outside, which only adds to the relaxing experience. Unfortunately, the Pantheon doesn’t have its own menu selection either and movie-goers have stick to the conventional popcorn, drinks and sweets menu. Overall, Nu Metro’s Pantheon theatre provides a great movie experience with digital projection, excellent surround sound and comfortable seating (both inside and out), all at a price of your average movie screening. If you can manage the short drive and bypass (or tolerate) the crowds, then I would recommend it over other theatres in the vicinity.

A word of thanks to Nu Metro staff for their assistance, with special mention to Irene Moonsamy (Cinema Manager, Emperors Palace).