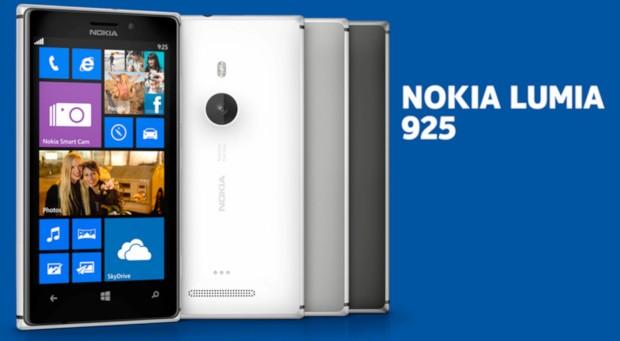 A week ago, Nokia shareholders approved a proposed deal that would see Microsoft purchase the Finnish company’s Devices and Services unit, which includes the likes of the Lumia range of products. While the deal hasn’t officially been signed into existence as yet, all current Nokia Lumia smartphones were designed and manufactured long before the deal was made public. The Nokia Lumia 925 was announced earlier this year in May, and released internationally in June. The, then, flagship device has finally landed on South African shores, after an initial scare that it might not have been released here at all. Having replaced the Lumia 920 as the flagship only a few weeks after the 920’s launch, the 925 brought about minor updates, but does it warrant a replacement, or should you rather save a little extra for the Lumia 1020? The Nokia Lumia 925 swaps out the thick plastic on the Lumia 920 for a more elegant, dark grey aluminium frame, and polycarbonate (non-removable) back panel. This makes the 925 the first metal-based Nokia smartphone since the days of Symbian. Not only does it cut down on the bulk, but lightens the device by 46g, now down to 139g in total. And while the dimensions haven’t changed much, the 925 is officially the thinnest and lightest Lumia on the market, and these changes have made it easier to use the 925 with one hand. Colour availability isn’t as bold as with the 920, and only comes in black, white and grey.

Other hardware design features include a 4.5” display surrounded by a shiny black bezel that house the backlit capacitive buttons below the display, and 1.2MP front-facing camera all on the front of the device, 8MP rear-facing camera with flash, and speaker on the back, microUSB port, microSIM slot, and 3.5mm audio jack on top, and volume rocker, power button and dedicated camera button on the right side. As previously mentioned, the Lumia 925 is fitted with a 4.5” display, which measures the same as on the Lumia 920, but that’s as far as the similarities go. The 920 was fitted with an IPS display. The 925, however, has a PureMotion HD+ AMOLED ClearBlack display, which provides a lot more vibrant colours than its predecessor. Although it isn’t quite full HD 1080p, the 1280x720px resolution (at 332ppi) provides adequate playback of movies and imagery. Based on these specs alone, the 925’s display cannot compete with the likes of the Apple iPhone 5s or Samsung Galaxy S4, but there’s a lot more going for the display than just its resolution.

Many may argue that the colour palette isn’t true to life, the sharp contrasts and crisp detail makes it quite enjoyable to view, especially when reliving those prized photos. If the display is a little too bright and vibrant for your taste, Nokia has included colour profile setting that allows users to customise the display output. Users can also customise a few other settings that include sunlight legibility, sensitivity to touch (gives the ability to use the phone while wearing gloves), double tap to wake, and Glance capabilities. The Glance feature enables when the clock should be displayed on the standby screen. This can be set on a fixed time interval, peek (hover your hand on the screen to enable), or always on. In addition, the AMOLED display will only illuminate the pixels that show the text, making it quite easy on battery life, if that is of any concern. From an internal hardware perspective, we always knew that Nokia’s smartphones would not compare side-by-side against other OEMs, but this is of little consequence, even with the Lumia 925. It sports a 1.5GHz Dual-Core Qualcomm Snapdragon CPU, Adreno 225 GPU, 1GB RAM, 8MP Carl Zeiss lens camera, 16/32GB internal storage, Corning Gorilla Glass 2, LTE (not available on all spectrums), and non-removable Li-Ion 2000mAh battery. Apart from the display and design, the Lumia 925 isn’t much different than the 920. There are always a few gripes to be had, but not all of them are related to Nokia’s hardware. A few software niggles crept in during the review period. The first of these is observed while on a call, and while it does detect your face and turns off the screen accordingly, it often turns it back on leaving your cheek to hit some of the onscreen call controls. On more than one occasion I accidentally hit the loudspeaker option, which isn’t ideal when in the company of others, or even at your desk at work. A simple trick to rid yourself of such embarrassing issues is to lock the screen as soon as the call goes through, although you will have to unlock again to hang up or choose any of the other options available. Then we have the Microsoft keyboard, which isn’t as user friendly as it should be. We don’t expect the best onscreen keyboard on the market, but with the likes of many other smartphone keyboards, there are many examples of how it can/should be done. Since the update to Windows Phone 8 Amber, there have been a few additions and omissions. The most notable of these, for me, is the restriction of Internet Sharing (Wi-Fi tethering), which doesn’t allow users to enable it in certain, if not most, conditions.

Nokia and Microsoft have added a few more apps to the Lumia suite, which now includes PhotoBeamer, Nokia Pro Cam, Nokia Smart Cam, MixRadio, and operator payments (Vodacom only), as well as a few third-party apps that have recently been added to the mix, including Pulse, Flipboard, Vine and some banking apps.

In little over two years since Nokia launched its Lumia series with the 800, each new Lumia thereafter presented a more complete design, and grown in stature, indicative of the slightly climbing figures in the smartphone market share. While the screen size doesn’t match that of the Lumia 625, the 4.5” inch still holds its own. The 925 essentially is what the 920 should have been, which in the end acted as a pre-cursor of what was to come, just a few shorts weeks later. Nokia has made some great leaps forward since the early days of the Lumia smartphone, and now is limited only by Microsoft’s Windows Phone OS, although it, too, has seen some change over the same period.

The Lumia 925 is a great in-between device, and doesn’t disappoint when taking photos or video, even in low light situations. Nokia is by far the leader in terms of Windows Phone OS manufacturers, and with the new deal soon to made official, it is destined to stay that way for the foreseeable future. The Lumia 925 has a market price of around R8,000, a full R1,500 more affordable than the desirable Lumia 1020, which has a market price of R9,500. Unless you truly need/want the extra capabilities in the camera department, the Lumia 925 has everything you need from a Lumia smartphone within the entire range.