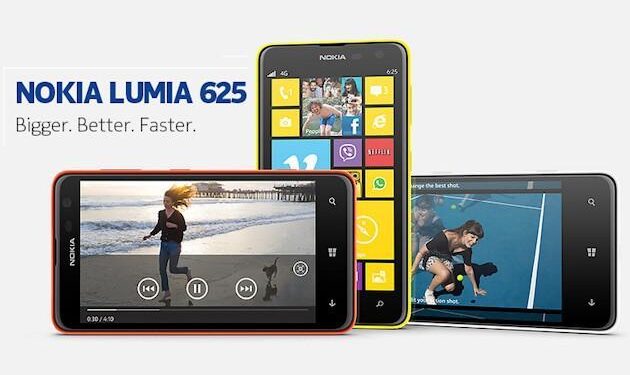 Nokia is the leading manufacturer of Windows Phone OS smartphones, while Android and iOS continue to dominate the market. Moreover, the Android-based smartphones lead the way with larger screened devices, with many of the flagship phones hovering around the 5” mark. Nokia recently unveiled the Lumia 625 at event one month ago, a smartphone that boasts the largest screen from Nokia’s Lumia range. But if you’re seeking an alternate to Android’s larger screened models, can the 625 compete on the same level? The Nokia Lumia 625 measures 133x72x9.2mm, which is notably larger than the Lumia 920, while being a full 1.5mm thinner and 26g lighter than the previous Nokia flagship smartphone. Even with all the changes, the 625 still bears the trademarks of the Lumia smartphone family. And as with many of the other Lumia devices, the 625 comes in a variety of vibrant colours, which easily stand out in a crowd at a party with little or no light. Although the Windows Phone 8 OS seems more business driven, the 625, with larger screen and colours, seems to be targeting the younger market.

The larger frame of the 625 houses the device’s 4.7” screen, which has an 800x480px resolution display, with a lowly 199ppi. This means that although users have the luxury viewing area, the imagery is nowhere near as crisp as on other recent Lumia smartphones. While this may be of some concern to techies and the likes, there is no major pixilation of images and videos. When comparing the 625 side by side against the 920, you will notice some blur around the edges of the live tiles on the main menu. Apart from visual distinctions due to the low ppi, the UI remains identical to other Lumia devices. While the app ecosystem still remains one of the key areas of concern for all WP8 devices, it’s a debate that has been ongoing for quite some time and doesn’t really deserve more attention. The 625 is upgradable to the latest WP8 Amber release, which puts it on par with the leading Lumia and other WP8 smartphones. One of the main advantages of the Lumia range over other WP8 devices is the included Nokia apps, which include Here Maps, Drive, Office, Nokia Music, Nokia Pro and Smart Camera, amongst others.

In terms of its overall performance, the 625 gets by more than adequately with its Dual-Core 1.2GHz Qualcomm Krait CPU, Adreno 305 GPU, 512MB RAM, 8GB internal storage, 5MP rear camera, LTE capabilities, and a 2,000mAh battery. As of late, Nokia has placed more emphasis on providing users with great cameras on their Lumia smartphones, and despite it being a lower-end smartphone, the 625 manages to eek out a something worth a little mention. While the lens and aperture may not deliver as hi-res photos as its older siblings, the software manages add value to your snaps. Low light and night time photography, though, should be avoided, as there tends to be high levels of graining with the limited exposure available.

One of the key standout features is the inclusion of an LTE module. Even though the device lacks one of the more prominent features of late in NFC, Nokia manages to deliver 4G LTE capabilities on a budget. The 2000mAh battery delivers a good performance, and under normal daily routines the 625 can easily support usage for a full day. Although the LTE may be a plus, it puts strain on the battery, which can dramatically reduce the battery duration if connected for longer periods. Some caution should, thus, be practiced when browsing the Web, but users can still easily manage the battery performance during the day. The Nokia Lumia 625 exhibits a larger screen than all the previous Lumia smartphones. Where the larger screen fails to deliver is a resolution that’s lower than some of the later Lumias, and, thus, doesn’t deliver the same display quality we’ve come to expect from Nokia. The device delivers one of the most affordable options for an LTE smartphone, and with a recommended price of R3,499, the 625 can be classified as a budget smartphone, making it even more impressive. Personally, I would have swapped out LTE for a display matching the 920 (or 925), something that Nokia may have considered as a variant sister device to the 625.

At the end of the day, the Lumia 625 doesn’t do enough to compete at the top, but definitely stirs the waters in the budget market, and is a worthwhile purchase for those watching their purse.