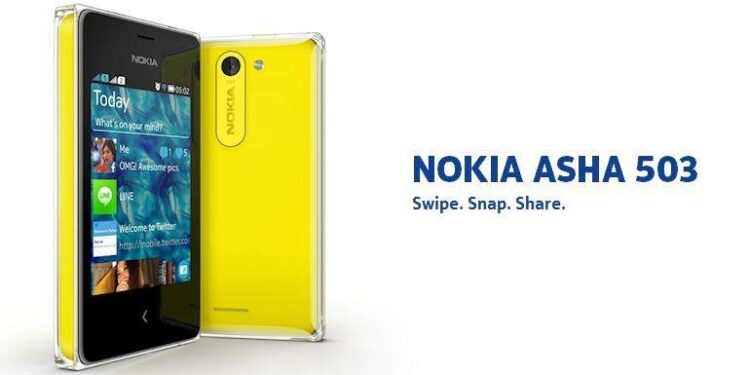 Nokia has spent most of the recent past marketing their Lumia brand. Although the brand struggled to gain traction at the start, it slowly picked up as the devices became increasingly appealing. Interestingly enough, while the Lumia brand may grab quite a lot of the limelight, it has been the Series 40 feature phones that have been Nokia’s mainstay for their mobile division. Over the past year, Nokia has been marketing the Series 40 replacement, the Asha series. Asha is the Sanskrit word for hope, something that Nokia can attest to for the new series. The company needn’t be overly concerned with, though, as the brand has seen Nokia retain leading sales in the feature phone market in South Africa. The Nokia Asha 503 is the pinnacle for the series, having launched earlier in 2014. Does the Asha 503 have the correct blend of features at the correct price to add to the already strong sales for the brand? It’s difficult not to draw any comparison to the average smartphone, but it is important to remember that the Asha 503 is a feature phone, not expected to compete even in the budget smartphone category. That being said, the design concept of the Asha 503 is quite unique with its outer plastic, transparent covering. This makes the 503 appear to be in a showcase of some sort, or frozen in a block of ice. In addition, while it still has the rectangle shape, it isn’t that of the typical dimensions, measuring 102.6×60.6×12.7mm. The device is tiny in comparison to many, if not all, smartphones, able to be enveloped by even the smallest of hands. The edges are square along the sides and curved on the corners. On the thickness side, the Asha 503 could do with some toning down to give a more premium look, having some extra bulge on the sides.

In terms of the button layout, Nokia has adopted a similar strategy to that of Apple, with a single button on the front. Unlike the iPhone, however, this main button is simply a ‘back’ button. The right hand side house the volume rocker and power button, while the left side remains bare. The top holds the 3.5mm audio jack, as well as the microUSB port, while the rear houses the camera and LED flash. A few legacy mobile phone users may recall Nokia’s early days in which many of their phones had plenty of interchangeable colours. Nokia has since brought this feature back with the Asha series, making it just as easy to change your colour scheme and covers (between Yellow, Red, Green, Cyan, White and Black) based on your mood that day. Overall, then, the 110g device is quite sturdy and diminutive. The Asha 503 has a TFT capacitive touchscreen, with 256,000 colours, as opposed to the 16 million colours on smartphones. It may only be 3” in size, but the Asha 503’s display is relatively large for a feature phone. The screen is protected by curved Gorilla Glass, which has a noticeable bezel. The 320x240px resolution yields a pixel density of a mere 134ppi. The touchscreen itself is not as sensitive on the touch as one would have hoped for, even considering the price. In addition, it is extremely difficult to use outdoors, being highly reflective. Moving indoors doesn’t make a sufficient amount of difference in your viewing experience. There is the option to increase the screen’s brightness, which assists to some extent.

The low resolution and low pixel density means that text and images are pixelated. Combining the two types on content on a webpage, for example, makes for low viewing quality, and sometimes illegible text. The small touchscreen means that the QWERTY keyboard is crammed to the confines of the 3” display, making it tricky to type at high speeds, with a large amount of typing errors. Typing takes some getting used to, but, over time, becomes manageable. The autocorrect feature lends a hand whenever you mishit a letter. Once again, there isn’t much to write home about what the Asha 503 has to offer under its hood. In terms of the CPU and GPU details, there isn’t anything to share, since Nokia have not revealed much on the processing power. The company does reveal that the device houses 128MB of RAM. What is clearly evident is the lack of processing speed available to perform even the most simple of tasks. Opening basic apps such as the calculator take time to open and use. Navigation and animations are also laggy at the best of times, with further delays in the interface when swiping through the UI, or even unlocking the screen. One of the most noticeable delays is the orientation switch between landscape and portrait modes. Storage space is so minimal, that users will most definitely be switching to an SD card to store their photos and other content.

The 5MP camera has a 2592х1944px resolution, along with an LED flash. Using the camera isn’t as tedious a process as with many of the other apps, but does take some time to load initially. Using the camera app is easy as well, swiping between shooting modes. There are a number of options available in the settings menu to tweak your photos, adjust effects, add timers, and even change the capture sound. One of the biggest pitfalls of the camera is its fixed-focus lens.

On the battery front, the Asha 503 has a 1,200mAh Li-Ion battery, which may seem insignificant, but considering the watered down performance and small screen, there is more than sufficient life to provide fairly long usage. Straight talk time on 3G has an indicated expectancy of four and a half hours, while on 2G it bumps up to 12 hours. Standby time is impressive at over one month, but for average use will easily last up to two days. The Asha 503 runs on the Nokia Asha OS version 1.1.1. The Asha OS is an updated, more modern version of the company’s successful Series 40 OS. Although the 503 isn’t technically a smartphone, the OS does operate along the lines of one, especially with its touchscreen capabilities. At the same time, the Asha OS resembles that of the Series 40 in terms of look and feel. There are two main homescreens, one of which contains the standard icons, while the other displays your current social media updates. Navigation through these menus is relatively simple, and with the addition of the standalone back button, makes it even easier. The Asha 503 has both Wi-Fi and Bluetooth support, which can be easily toggled by the drop-down menu by means of a simple swipe.

The device ships with a number of apps already pre-installed, including Facebook, Twitter, WhatsApp, e-mail, calendar, calculator, note, voice recorder, FM radio, music, and file manager. On the games front, there are a few pre-loaded demos, which will give you around 3 minutes worth of gameplay. Since the Asha 503 falls into the feature phone category, it is common to discuss the phone’s call quality. Unfortunately, this isn’t something worth praising, as it often sounds tinny and soft, especially when switching to loudspeaker. In addition to the normal network calling services, the Asha supports VoIP for a number of third party services. Although this is quite useful and cost-effective, the performance is worse, making it even less attractive to use. At the end of the day, the Nokia Asha 503 blurs the lines between the boundaries of a feature phone and what constitutes a smartphone. Based on screen size, screen quality, performance, battery size, and storage space, the Asha 503 appears more feature phone than anything else. At a cost of R999, it does make for an expensive feature phone, with some budget smartphones these days coming in at under that price point. A few things that do stand out is the Asha 503’s design, selection of colours, LED flash, and even Wi-Fi support make it an intriguing buy if you’re in the market. I can’t help but feel the price is a tad on the expensive side, and with a slight adjustment would sell more than its fair share.