Nokia 8 Review – The Reinvention Of A Brand And The #Bothie 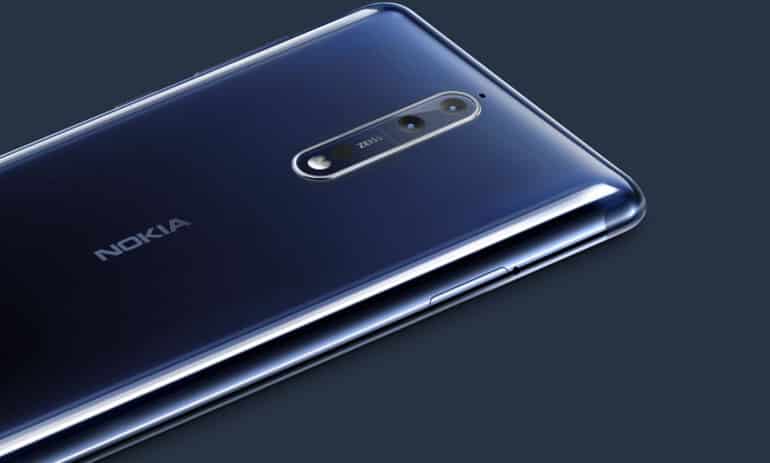 Nokia has suffered numerous, and notably largely unsuccessful, attempts at keeping the brand running alongside many mainstream smartphones while also trying to differentiate itself by means of the Windows Phone OS. What was once the biggest mobile manufacturer in the world, quickly dwindled in numbers despite having good hardware and some of the best cameras around. Having relaunched one of the most famous devices in mobile history in the form of the 3310, Nokia, under the HMD umbrella, tapped into fans’ nostalgia with successful sales despite a few lacklustre reviews. Nostalgia, however, won’t get you very far in this game, as they’ve already found out in previous years.

HMD knew it needed a reboot, a fresh look at the smartphone market, and by releasing a slew of devices across multiple categories, it may yet breathe new life into the brand after all. This divide and conquer may not have always worked with a few other brands, but HMD has found enough differentiation in each of the devices to find a market for each, although only time will tell how successful the approach may be. The line-up, as well, seems simple enough to read in numeric form as the most powerful flagship to the more budget conscious. But with varying screen sizes across each of the numbers, knowing which is which may cause buyers a small headache.

I received the Nokia 8, the flagship of the range, to review for a few weeks, and found quite a few unique elements and some straight off the shopping cart, blended together to quite an impressive offering. But will it be enough to challenge the heavy-weights, and also spark new life into a dying star? 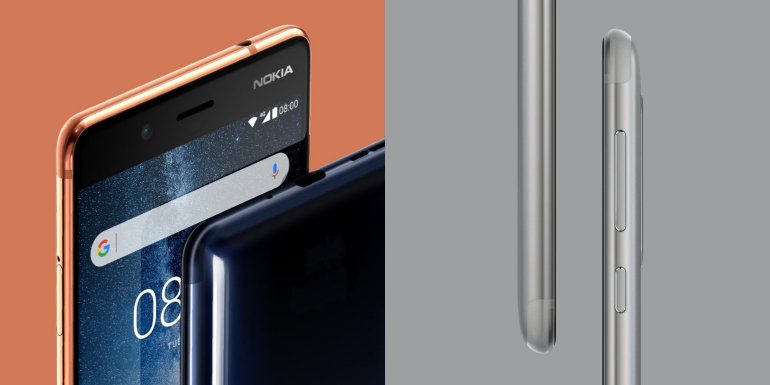 Out of the box, the unit looks very sleek with a black glass front, and gunmetal grey on the rear. Turning the device on and you’ll be able to notice the somewhat large bezel on the top and bottom, with a thinner bezel on the sides, but prominent when compared to many leading flagships in 2017. The top of the front houses the earpiece in the centre, the front-facing camera off to the left, with the Nokia logo on the far right. The bottom provides room for the capacitive buttons, which include a slightly concave home button which also doubles as a fingerprint sensor, with the back button on the left and menu button on the right. There’s a type-C USB port on the bottom, which also has a speaker grill off to its right. The top houses the 3.5mm jack. Largely rudimentary up to now. Flipping the device over reveals a few more premium features. The device has an aluminium unibody, which spreads from the back to the sides. The top centre of the rear has a slightly raises glass housing, which includes the dual cameras, dual-tone LED flash, as well as a laser autofocus. Another Nokia logo is presented in textured metal form in the middle, with some fine print at the bottom, which reads “Designed by HMD Global Oy.”

The sides of the device are fairly plain, with the SIM and microSD slot on the left, and volume rocker and power button on the top right. The unit weighs 160g and measures 151.5×73.7×7.9mm. This in comparison to the Samsung Galaxy S8 is 5g heavier, but 0.1mm thinner. Not a bad feat.

There are a few niggles in terms of the design, which includes the antenna lines across the top and bottom. While it’s an important part of the build, it may have been better served matching the colour to the metal grey of the rear and sides to make it less obvious. There’s also a small rattle on the volume rocker but isn’t noticeable during most everyday usage. The metal unibody may also not be to everyone’s liking, especially those who are accident prone, as it’s slightly slippery in hand. Personally, I had no issues with this, as I’d like to think I’m cautious enough to avoid most dangerous situations.

The Nokia 8 is one of the best, if not the best-looking device to have sported the Nokia insignia. While it may not offer any waterproofing capabilities, its premium look and feel makes it quite impressive overall. 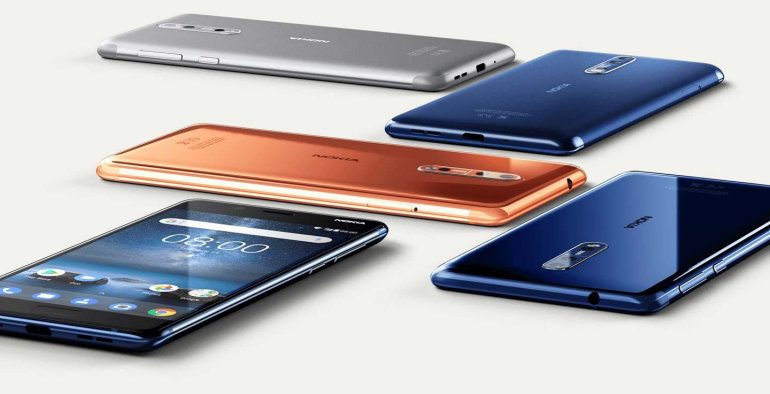 The Nokia 8 has a 5.3″ IPS screen, which has a QHD display with a 1440x2560px resolution and 554ppi pixel density. You won’t have the same allure of an edge-to-edge display of many other recent flagships, but the performance is nonetheless still great. The high resolution provides crystal clear imagery that’s a joy to look at. In addition to this, the colours are bright and vivid, even when comparing the IPS panel to the AMOLED display on the Samsung flagships. The contrast is also very good for a non-LED panel, although it does have an ever-so-slight blue tint on white reproduction.

The unit also sports Corning Gorilla Glass 5, which makes it very durable, and has already proven itself across the web with many reports of how well it is able to withstand knocks and drops. 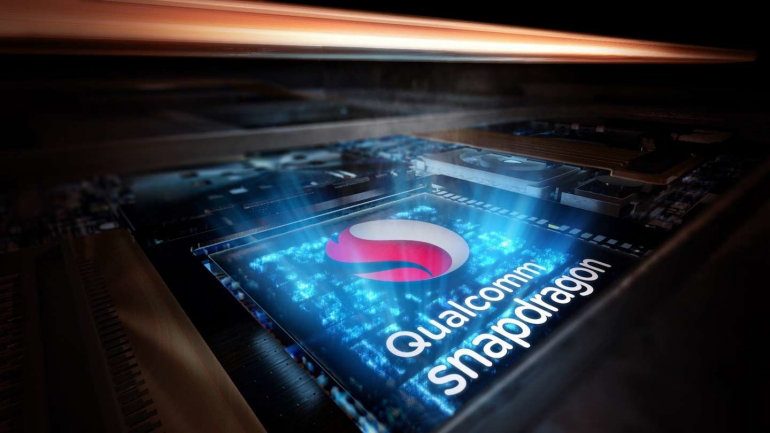 The Nokia 8 features Qualcomm’s most powerful chipset, the Snapdragon 835, which has an Octa-core CPU (4×2.5 GHz Kryo & 4×1.8 GHz Kryo), which also has an Adreno 520 GPU. This is the same chip powering the US variant of the S8. The 64GB variant I received for review has 4GB RAM. The unit ran flawlessly over the two weeks of review, with no glitches, jitters, or lag of any sorts to report. In addition to this, the gaming performance was also greatly improved when compared to my S8. Most of these improvements, however, I feel are the result of the device’s vanilla Android build.

HMD made the announcement very early on that they’d be switching the Nokia’s OS platform from Windows Phone to Android, which has proven to be quite a significant decision in the end. The team also made the conscious decision to take a hands-off approach when it comes to the OS, which has a bittersweet end result. While it allows for a very lightweight Android build, and a quick turnaround on firmware upgrades and patches, it doesn’t allow for much in the way of putting their own touch on the user experience. What’s really great about the vanilla build is that it has allowed the device to have already received the Android 8 Oreo update, ahead of many of the leading Android flagships. Android 8 works really well and seems even more integrated with the device that before, and definitely gives the Nokia 8 an advantage over its rivals in this category.

Battery life on the device is good as well. The non-removable Li-Ion, 3090mAh battery is capable of powering you through the normal work day, and then into the morning as well. For power users, the device is also able to make it through an entire day without needing to charge, as you can expect between 11 and 13 hours of battery life under the heaviest load. 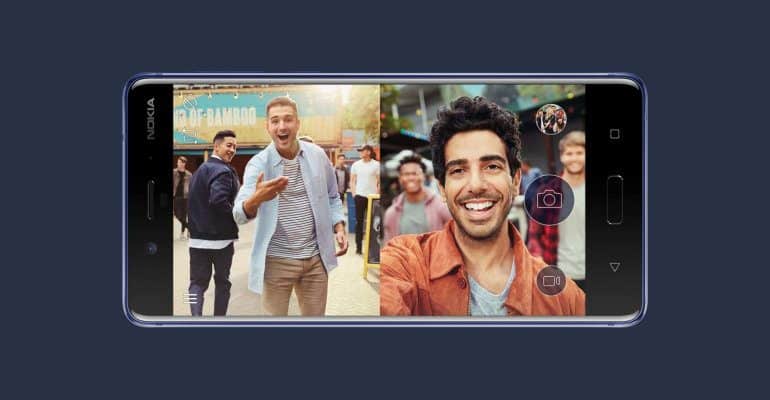 One of the biggest talking and marketing points on the Nokia 8 is its camera. Nokia has been touting the Dual Sight camera, more popularly known as #Bothie, in many of their ads, reflecting on its capabilities, which allows you to film and take photos with both the front and rear cameras at the same time, allowing you to film moments of splendour, which is then also represented in your facial reactions. The device sports a dual rear-facing camera, which has a 13MP with a f/2.0, 1.12 µm aperture, and has phase detection, laser autofocus, Carl Zeiss optics, OIS, dual-LED dual-tone flash. The front-facing camera also sports a 13MP with the same aperture and phase detection. Both from and rear cameras also offer HD capabilities, which hardly ever supported on front-facing cameras.

In well-lit conditions, the camera takes beautiful photos and video, with bright colours, realistic reproduction and clear imagery. Things aren’t as great in lower light conditions, although still very solid. In addition to this, the #Bothie mode also suffers a bit in terms of slight granularity and pixelation. It would seem that the camera is dialled back a bit when needing to operate both the front and rear cameras, which is understandable, but doesn’t do much in the way of touting the device’s true capabilities if it has to be turned down to make use of the feature. Most likely the use of both these cameras in full 4K and HDR would make for a few jitters and lags, affecting the overall user experience. Hopefully, a software update will be introduced that fixes such issues and allowing for the device to provide all-out power features.

#Bothie with the Nokia 8. When you're having movie night and your fiance slaps some colour into you. The rear has a dual 13MP sensor with Zeiss lens while the front has a single 13MP sensor, both with 2160p@30fps recording capabilities. The best of both worlds! #Fortresszar #bothie #nokiamobileza #instalike #instagood #bothieprank

While most, if not all, the software features are stock Android, the one standout app that isn’t quite stock is the Camera app. One of the main reasons for this is Nokia’s #Bothie feature. The app also allows you to live stream directly to YouTube and Facebook directly from the app with only a simple selection. This is quite a good nice-to-have feature, which HMD has closely developed with the help of Qualcomm for a truly integrated and seamless experience. The app also includes Nokia OZO support for the 360-degree experience (records 360-degree audio, but requires Nokia OZO camera for full virtual effect). 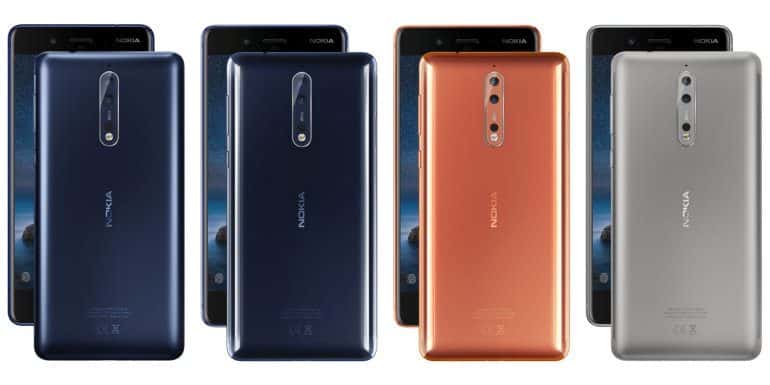 Historically, Nokia was known to provide extremely rugged devices with state-of-the-art capabilities at the time. Their latest offering in the Nokia 8 is a nice step back in this direction, as HMD has offered both a rugged unit by modern standards, as well as some of the best hardware around, and coupled with the latest Android build makes for quite a lightweight, yet powerful experience.

HMD has really done the Nokia brand justice with the Nokia 8. Not only is it a great comeback device, but also does enough to be able to compete with some of the leading manufacturers in the business, and win a few battles. While it may not have the appeal in terms of the design and build of many of the other flagships, it more than makes up for it with good hardware and software integration that’s noticeable from the get-go. At a price point just below the R10,000 mark, it’s also 30% cheaper than many of its rivals. This makes Nokia 8 a definite contender in 2017. One can only hope now the sales will reflect this, and we’ll have more great devices in the pipeline for the brand.