Nintendo is once again courting fans with its new console, the aptly named Switch. And, take it from me, it is a sleek and good looking console. But does the console successfully span the divide between hand-held and console gaming?

I was one of those kids that grew up when Nintendo still dominated the console world before there were Xbox and PlayStation fanboys. It was a wonderful time filled with Mario, Castlevania and, of course, Zelda. In the last few years, I’ve found myself falling out of love with Nintendo as their consoles, and in some respects games, just did not attract or command my attention anymore. Like many gamers, I found myself having a passionate yet short-lived relationship with the Nintendo Wii. After being played quite a lot in the first year or two, it found a permanent resting place in one of our storage cupboards. Thankfully, that doesn’t seem the case with Nintendo’s latest offering, the Switch. There is no doubt that the Nintendo Switch is unlike any console you have ever seen before, and it can be quite a challenge to explain how this unique little box functions.

The Switch itself consist of two main parts: there’s the console dock, for playing in classic TV mode, and then there is the 6.2” capacitative touch-screen tablet, for gaming on the go. In essence, the tablet functions as the heart of the console and, by placing it snugly into the dock, the video output gets redirected to the TV almost instantly. No, it’s not some kind of unholy magic (I’ve checked). Although, it’s quite amazing seeing the console seamlessly switching between TV mode and hand-held when playing a great looking game such as Zelda: Breath of the Wild. I was pleasantly surprised at the small size of the Switch’s dock, which made getting it to squeeze in between the various other devices in my cramped TV unit a breeze. The dock itself has a great clean design and, paired with the subtle Switch logo, made it seem at home between my other devices. When switching from hand-held to TV mode, the Switch comfortably and elegantly uses its own weight to slip over the dock’s USB-C charging pin. At the back, the dock cleverly and discreetly hides it’s HDMI output, USB-C based power input and one USB 3.0 port behind a panel. This keeps everything nice and tidy and makes sure you don’t have any unnecessary wires laying around. Sadly, Nintendo has not yet confirmed if the USB 3.0 port will support external storage, but what it will do is charge the, must buy Switch Pro controller (more on this later). When you feel the need to grab your Switch and play on the go, it’s as easy as slipping the two Joy-Con controllers onto the sides of the tablet (which they do quite easily) and lifting it out of the dock. Quicker than you can say “I want more Zelda”, the screen lights up and you are ready to go adventuring. Along the top of the tablet, you will find a slot for those cute yet foul tasting Nintendo Switch cartridges, a headphone jack (something to take note of is that the Switch does not support Bluetooth headsets), the volume buttons and a power button. All these blend into the shape of the unit seamlessly. One part of the design that baffled me a bit was the inclusion of the kickstand. First off, when I initially pulled out the kick stand it took quite a bit of force. Considering all the other parts of the console attach and detach so effortlessly, I was worried that I might break it. Well, after carefully (and forcefully) pulling it out, I was able to place the unit on a table using the stand. And while the stand does its job, it did feel a bit wonky. I also found that the angle at which it stood seemed far too high and made gaming in this manner less enjoyable. One of the most important aspects when gaming on the go is battery life, unfortunately, when playing a resource intensive game such as Zelda: Breath of the Wild the battery tends to only last about 2.5 hours (which is still commendable for such a graphically intensive game).

This said, there is no doubt that the Switch works best when gaming on the go. At first, I thought that the device would be unwieldy and heavy, but I found it surprisingly light and easy to carry around. I did experience some cramping due to the design of the Joy-Con controllers (and my oversized man-hands), but overall, The Switch is one of the best gaming experiences on the go.

The Joy of the controller

One of the most stand-out design features of the Switch is the Joy-Con controllers. And while they might not offer the precise gaming more hardcore players might crave, they are quite multi-functional. Each Joy-Con, when removed from the Switch, can function as their own separate controller, perfect for some multi-player action. And while my large hands did tend to envelop the controllers, I did get used to using them after a bit of playing. But as with most Nintendo controllers, these aren’t just your run-of-the-mill controllers. The right Joy-Con Controller has an NFC reader built into the base of the analogue stick, for those wonderful Amiibo’s (now I have an excuse to buy more), and an IR camera. Those who enjoy flailing their arms around will be pleased to know that both controllers have gyroscopic inputs for all your motion control needs. Keeping this in mind, the controllers also feature wrist straps to prevent them from flying out of your grip unintentionally. The most impressive addition to the Joy-Con controllers for me was the “HD Rumble” feature. This feature uses advanced haptic feedback to produce sophisticated vibrations that can even simulate the feeling of virtual balls rolling inside of the controller. I did find that the layout of the buttons and joysticks felt a little awkward and took some getting used to. Luckily, Nintendo does have a Pro Controller available (at an extra cost) that looks and feels similar to the DualShock 4. If you are a serious gamer, I would strongly recommend you get. The minimalist approach to UI

Nintendo has not been known for their UI design and the Switch is hoping to change this. The console’s interface is beautiful, clean and simple. It fittingly feels like a hybrid between those found on consoles and tablets. The UI can be navigated when in the hand-held mode using either the Joy-Con controllers or the touch screen. The “home” screen features the available games in large tiles, with six buttons beneath these. The UI also allows users to switch between light and dark themes (which could indicate more themes in the future). Of course, this minimalistic approach to the UI also makes it quite fast and responsive. A lot of this has to do with the fact the Switch is never really switched off but rather placed in sleep mode. This means that there is no pesky waiting for the console to boot up and that you can get straight to gaming. This focus on speed and efficiency is also apparent when it comes to the console’s games – having them on cartridges means no longer having to wait for a lengthy install before getting to play your favourite games. There is also something very nostalgic about inserting a little cartridge into a slot on a Nintendo console. Nintendo has announced that the Switch will feature an online network similar to PlayStation Plus or Xbox Live, unfortunately, the system will only become available later this year.
It was also announced that friend codes will be making a comeback. This feature means that users will need to exchange 12 digit codes with each other instead of just searching for usernames when being added to the friend’s list.

So many of you are probably wondering whether the Switch worth buying or whether it will steal your heart. The answer is a little more complicated than I first would have anticipated. While it is touted by Nintendo as a console that lets you game on the go, I would rather refer to it as a hand-held device that lets you game on the TV. There is no doubt in my mind that the Switch offers the best hand-held gaming experience out there today. However, it also does an admiral job as a home console. It’s a unique selling point and one that might help Nintendo claw their way to the top once again.

Currently, there are only a few games available at launch. And while Zelda: Breath of the Wild(a masterpiece!) will probably keep you busy until the next few games are released, it still remains to be seen whether the console will receive enough support from third party developers. There is still a lot of work Nintendo needs to do, both with regards to missing features and games, but I am convinced that Nintendo is taking a step in the right direction. Slowly but surely Nintendo is winning back fans with their innovative design and breathtaking games.

If you are a huge Nintendo fan or love gaming on the go then the Switch probably is the console for you. 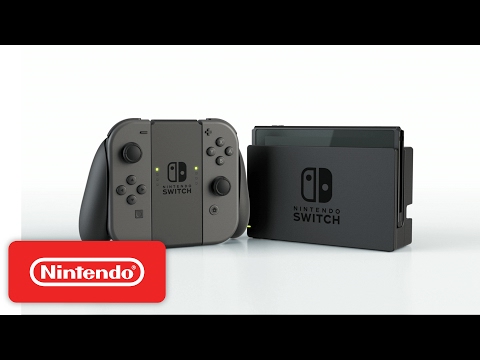