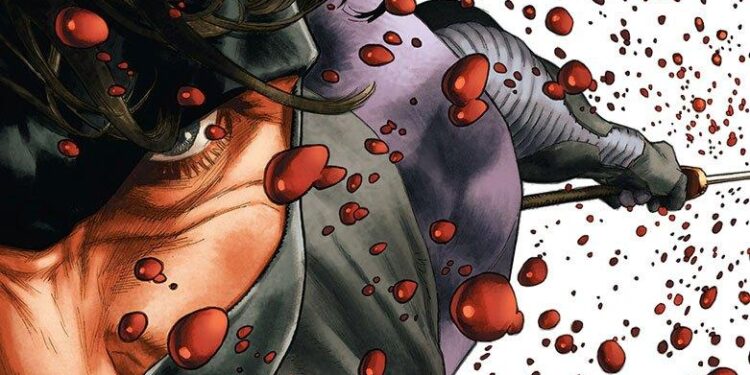 Picking up where the last issue left, Ninjak drugged Kannon so that he could infiltrate Weaponeer’s computers; however, he was attacked by Roku and knocked out of the top storey of Kannon’s skyscraper. Now, he only has a couple of minutes to fight off Roku, get back into the office before Kannon wakes up and delete the video footage that could expose him.

This issue doesn’t take its foot off the gas pedal for one second, as it’s a heart-stopping race against the clock. It’s fast and aggressive, only pausing to switch to flashbacks of Ninjak’s past (à la Arrow). The panels bring the tension to life, evoking the action-packed style, gesturing and epic battle sequences of WildStorm’s WildCats. There’s an undeniable Jim Lee influence in this book, and it isn’t a bad thing at all.

There is minimal dialogue between characters, focusing more on Ninjak’s inner monologue as he moves through the panels. While this might give an air of emptiness, it actually complements the plot superbly. The main character’s thoughts are in direct contrast to the nervy nature of the story, since Ninjak never seems to doubt himself or the fight against time. The reader knows he will succeed in his mission – despite the odds – but there must be a catch somewhere (and there is).

After three issues, Ninjak is making a serious case of reclaiming its position as one of the more exciting comic book series around. Let’s see if the consistency can continue for a prolonged period.