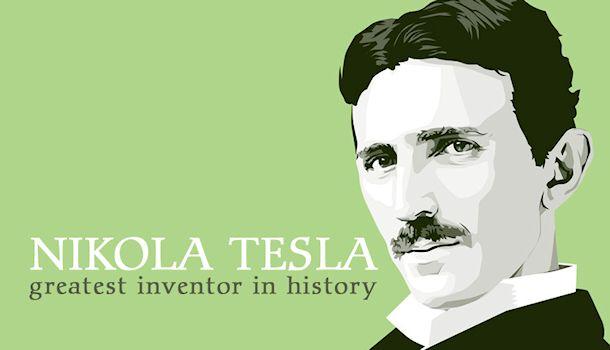 For those who don’t know, Nikola Tesla was a Serbian-American inventor, electrical engineer, mechanical engineer, physicist, and futurist who is best known for his contributions to the design of the modern alternating current electricity supply system. He was also probably the greatest geek who ever lived.

Nikola Tesla lived in a world where many people at the time still lit their houses by candlelight. Today, every household with power uses his invention of Alternating Current.

Tesla had worked for Edison in his early career, but a feud over owed costs and then the adoption of Tesla’s AC current over Edison’s DC current in homes across the US meant that the two could never see eye-to-eye, and spent quite a bit of time attempting to discredit the other’s work.

There are many textbooks out there that still represent Thomas Edison as the father of the electrical age. In recent times, more and more websites, forums, museums and the likes have dedicated time and money to set the history books straight.

2. Invented the first remote control, demonstrated on a toy boat in 1898.

3. In his old age, Nikola Tesla became somewhat of an eccentric with characteristics of OCD. He became obsessed with the number 3, only ate boiled food and communicated with pigeons (one of which was very special to him).

4. In an attempt to discredit Tesla’s AC invention, Edison electrocuted animals in public to show its potential dangers. Edison would later go on to invent the electric chair.

5. The first hydro-electric power plant was built at Niagara Falls to power New York City. The plant and technology used were designed/invented by Nikola Tesla.

Nikola Tesla started a project, backed by J.P. Morgan with $150,000, to build a tower that would use the earth’s natural frequencies to provide power and transmit data wirelessly by means of the Tesla Coil. The intention was to provide the world with free energy across the world. When Morgan found out about this, he pulled out the venture and had the tower destroyed.

Tesla (9th from left) with world-famous scientists, including Einstein

7. At the age of 86, Nikola Tesla died in poverty in a hotel rented by Westinghouse Corporation. Two days following his death, all his belongings (including notes, inventions, etc.) were seized by the US government.

8. Prior to being demolished in 1917, Nikola Tesla had hoped that the Wardenclyffe Tower be used to supply free wireless electricity to the world.

9. Tesla had over 250 registered patents to his name upon his death. These patents included the spark plug, tesla coil, and radio (further details below).

10. During World War II, Tesla had plans to build a death-beam weapon. Although secret US military tests were conducted, no findings were made public and all documents in regards to the invention and testing disappeared.

In addition to these points, there are at least 278 patents accounted for, which were issued to Tesla in a total of 26 countries. These patents included ideas that are used in modern engineering, as well as inventions of his own.

We take a look at 10 inventions in which Tesla made significant contributions toward, as well as own a few patents for these inventions:

This is one of Nikola Tesla’s most important works to date, as it allowed cost-effective distribution of electricity over long distances, something that Edison’s Direct Current couldn’t achieve.

Although early work had been done in regards to fluorescent bulbs, it was Nikola Tesla’s work that eventually led to industry commercially producing such lights, albeit some 40 years later.

Tesla showcased his work with glass tubes at the World Fair, in which he bent the glass in the shape of famous scientists’ names, and is noted as an early form of the neon gas lights.

As with his ventures in lighting, Nikola Tesla’s work with x-rays drew inspiration from previous works and papers from the 1800s.

His research included early works such as Kirlian photography right up to that which we find in modern medical diagnosis today.

In 1930, Tesla invented what we know today as the electric motor; a motor with rotating magnetic fields. This invention went relatively unnoticed in the automobile industry as the popular fuel-engine had already made its mark.

In addition, the economic crisis as a result of World War I meant that there wasn’t much interest in backing this venture.

The electric motor, today, can be found in everyday life from household appliances and water pumps to hard-drives and electric watches.

Tesla had an eidetic memory, which allowed him to speak 8 languages, and memorise complete books and recite them at will. Most of his ideas were thought up in his head and without ever having written them down built these ideas. Many attribute his lack of further patents due to this.

Tesla also holds the patents that eventually led to the development of the transistor, the backbone to all computing devices such as the PC and smartphone.

In 1943, the Supreme Court overturned a patent granted to Guglielmo Marconi (backed by Edison and Carnegie) as the inventor of the radio. It turns out that Tesla had already patented similar designs in 1897, which ultimately led to him been credited with the invention of the radio.

The confusion here arose from the reversal of Nikola Tesla’s patent in 1904, and then reversed that decision again, which allowed the US government to make use of radio technologies without paying any royalties to Marconi for use during the World War.

Needless to say, Nikola Tesla spent a large portion of his time dedicated to robotics. His vision for the future was filled with ideas of intelligent cars, robot companions, sensors and autonomous systems.

His love for robotics is summed up in a quote: “I have by every thought and act of mine, demonstrated, and does so daily, to my absolute satisfaction that I am an automaton endowed with power of movement, which merely responds to external stimuli.”

Tesla developed early high-frequency technologies and his work on directed-energy weaponry in the early 1900s highlighted his contributions to the modern laser.

As with the radio, the credit of inventing the radar was wrongfully awarded, this time to Robert A. Waston-Watt in 1935. In 1917, Nikola Tesla had presented the idea to the US Navy before the start of World War I, in an effort to detect German U-boats.

At the time, Edison served as head of the Navy R&D and convinced the board that the idea had no practical application in war.

Tesla discovered the earth’s resonant frequency in the 1890s, which he later used in the development of the earthquake machine that was said to almost demolish an entire suburb in New York when turned on.

You can find a more complete list of Nikola Tesla’s patents online.