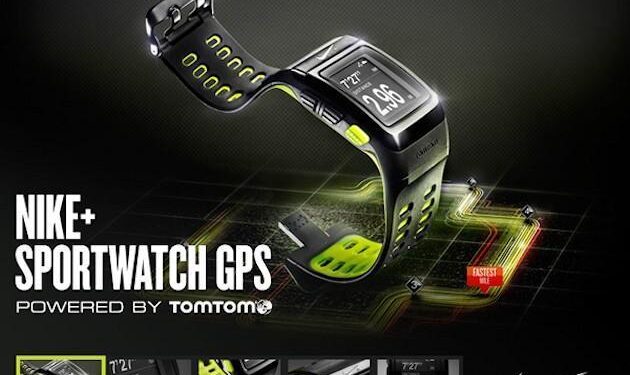 TomTom is renowned for its GPS-enabled gadgets. Nike on the other hand are known for their sports apparel and equipment. The two have entered into a joined venture to create the Nike+ SportWatch GPS. The Nike+ SportWatch GPS was initially launched in 2011, and has seen many iterations over the past two years. Despite its awkward naming choice, the sport watch, on first glance, has a lot to offer, especially if you’ve just spent R1,899 on it. Once unpackaged, you’re left with a larger than average watch at your disposal. Weighing a hefty 63g for a sport watch, one would have expected an awkward and noticeable feel on your wrists. Thankfully, this isn’t the case. With its adjustable straps and secure grip, the Nike+ SportWatch felt comfortable to wear, and even run with. The watch’s buttons are positions on the left hand side, making it more accessible when worn on the left arm for a right-handed person, which doesn’t allow for the same ease of use for left-handers wearing it on their right arms. The buttons are simple; two buttons for scrolling up and down, and one to select.

The interface isn’t tricky to use as all. You can easily pick it up and use it as if you’ve had it for years. Having said this, there are other aspects of the watch that don’t come quite as easily, the first of which is using the backlight in low light. Even more annoying is the fact that the manual fails to mention anything other than turning it on and off. Triggering the backlight, however, is as simple as tapping the display with your finger.

Setting up the device for a run is nothing more than three clicks away, making it extremely easy to use. The large display and font allows the user to see the provided stats without too much difficulty. Although runners are limited to the amount of information to be displayed on the screen at any given time, choosing between average pace, instant pace, heart rate (when using the Polar Wearlink Transmitter), laps, intervals, time and distance. Included in the package contents is a shoe pod, which can be used in conjunction with the GPS tracking or as a standalone measuring tool. The pod acts as a backup to lost GPS signal and indoor runs, as well as pedometer. The problem with the pod, however, is that it’s designed to slot into the modern Nike+ ready shoes.

The nikeplus.com website provides downloadable software for the Nike+ SportWatch GPS, which makes very little sense since the software only proceeds to redirect you to back to the website to interface with your watch via the USB attachment. Despite this, the options offered via the software adds to that of the watch itself, providing information visualisation for all entire history (up to 50 runs stored on the watch). This means you can view your run history such as time, speed, distance and even elevation. What’s interesting about the site is that it also allows you to set run reminders, track achievements, and connect with friends and other social communities.

All these features provided via the site are useful, but that’s where it ends. During your runs, you have no access to any of this information, apart from the distance, time and speed statistics. Sufficed to say that it would be some task to add social connectivity as you run, but other features such as achievements set would make for much more motivated running. Achieving personal bests are indeed recognised after your run, which doesn’t aid your actual run itself. The Nike+ SportWatch GPS has a relatively long battery life when used for daily runs, which lasts around 50 days for normal use, and 8 hours for GPS-tracked runs. For marathon runners, this wouldn’t be an ideal tool, as the fear of running out of battery charge during a run is enough to put out of contention. A few other nagging issues with the watch is its lack of variety in terms of including other sports such as cycling, being able to change settings without requiring the use of PC software and its limited capability of comparing your personal best times as your run against a target pace or distance. The biggest issue using the Nike+ SportWatch GPS is that on occasion it would take quite a long time to connect to the GPS satellites before being able to start the run. This, then, translates to losing the body heat generated during a warm-up as you patiently await the signal to start running.

If you’re novice runner looking for an easy way to track runs and progress without having to lug your smartphone around with you, then the Nike+ SportWatch GPS may be an ideal option, although it would be better advised to do some research before purchase. For the more advanced athlete, the watch is definitely all too simple, and with the lacking multi-sport options makes it a hard option to choose. Considering the price at the end of it all, you may find plenty of variants available for your requirements.