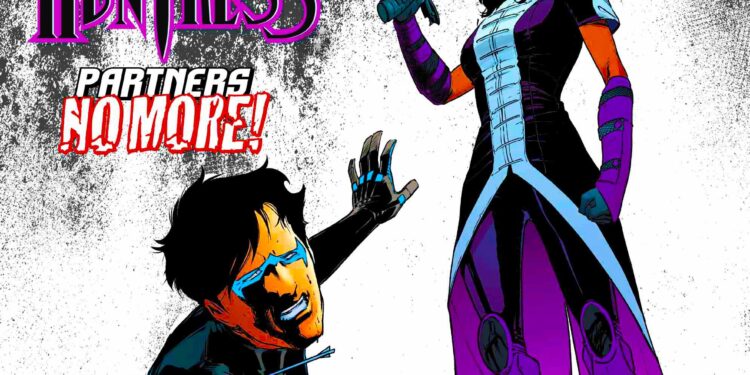 Well, Nightwing‘s love life has certainly been at the centre of his adventures recently. After this relationship with Shawn Tsang has come to an end, Nightwing #26 sees him being visited by a former flame Huntress. The question is, what does she want from him? In “Spyral” part one, Huntress pops back into Dick Grayson’s life while he is at his lowest point. Shawn dumped him, Brendan “Giz” Li was murdered, and he’s struggling to get back to his “normal” day-to-day life. Initially, it appears as if she’s only there to help him find out who killed his ally, but with Helena, there’s always another motive involved. This time, it’s tied to her and Dick’s past as agents of Spyral.

Subsequently, Shawn struggles with the end of her relationship with Dick in her own way, too. Pigeon tries to convince her to go back to her life of crime, but Shawn refuses. However, after some reflection, the signs point to her going back to her old nefarious ways. Has Dick driven another girl to crime? We’ll have to wait and see.

There’s quite a bit happening in this issue, as Tim Seeley flies right into this new arc. Typical of a spy story, he throws in a whodunit into the mix and keeps us wondering who can be trusted. While Grayson might’ve been a divisive series to fans of Nightwing, it did introduce a lot of questions that still need answering, so this storyline might provide the closure we require. Seeley also keeps up with his routine of including an absurd amount of action. I don’t think there’s been one Nightwing book that’s lacked a fight scene of sorts, and this issue kicks up a double-whammy as Dick and Helena beat down a couple of baddies in style.

On the pencilling front, Javier Fernandez returns for what feels like the hundredth time to the series. We’re already familiar with his anime-inspired artwork by now, so the art style shouldn’t surprise anyone who has been reading the former Boy Wonder’s Rebirth adventures. Although, I must say that I do miss the art from the “Blockbuster” storyline, which really suited Seeley’s writing as well.

We’re used to quality from Tim Seeley’s Nightwing, and there’s no letdown here. It’s almost impossible to get bored with this book as it changes things up frequently and explores all facets of Dick’s life. Once again, add this to your buy list for the week.