Perhaps the best thing about the “Blockbuster” storyline is how it’s moved Dick Grayson away from his relationship with Shawn Tsang for a while. Sorry, Graysungs, but we all know that it’s Dick and Babs forever, and the previews for the forthcoming months seem to reaffirm it. In Nightwing #24, Tim Seeley ignores the lovey-dovey drama (well, mostly) and whips up an all-action affair packed with supervillains. Honestly, when’s the last time that you saw Nightwing take on a whole host of bad guys? This is like Dick’s Arkham Asylum as he battles an array of villains who are testing out Tiger Shark’s weapons on him. As expected, he does it with a sense of humour, and brings the pain to their crime-loving butts. Yet, at the end of it all, Blockbuster appears and reveals there’s a bomb (of course there’s always a bomb), telling Dick that he’ll be Blüdhaven’s saviour, not Nightwing. And the bomb explodes…with Dick in its blast radius, seemingly.

Pack some Thrombo Gel for your bruises, because this is also an action-heavy issue. Seeley pumps a lot of different scenarios and quips into these pages, while Miguel Mendonça gives us some of the best Nightwing action shots since Eddy Barrows’ run in the New 52. It’s an action comedy leaning more towards the action side, if you will.

What Seeley does incredibly well is to show the heroic side of Nightwing here. Even with all these villains in one place, he refuses to jump ship and just let the bomb go off, ridding himself of them in on go. No, like Batman, he values human life and doesn’t see himself as an executioner, even if the baddies do deserve to feel the heat of a little blast or two. This ties in with Rebirth’s renewed drive for the heroes to value optimism and hope, not death and punishment. Mendonça’s pencilling style isn’t that much different from the previous series artist, Javier Fernandez, which allows for a consistent art style. I don’t know about you, but a change in artists normally takes a couple of issues to get used to. This is Mendonça’s third issue in a row and it feels right at home.

Once again, Seeley drops another terrific issue in the form of Nightwing #24. The series might not be considered one of DC’s premium books, but it’s certainly outperforming some of the other bigger titles, such as The Flash and Justice League, in quality. Add this to your must-buy list. 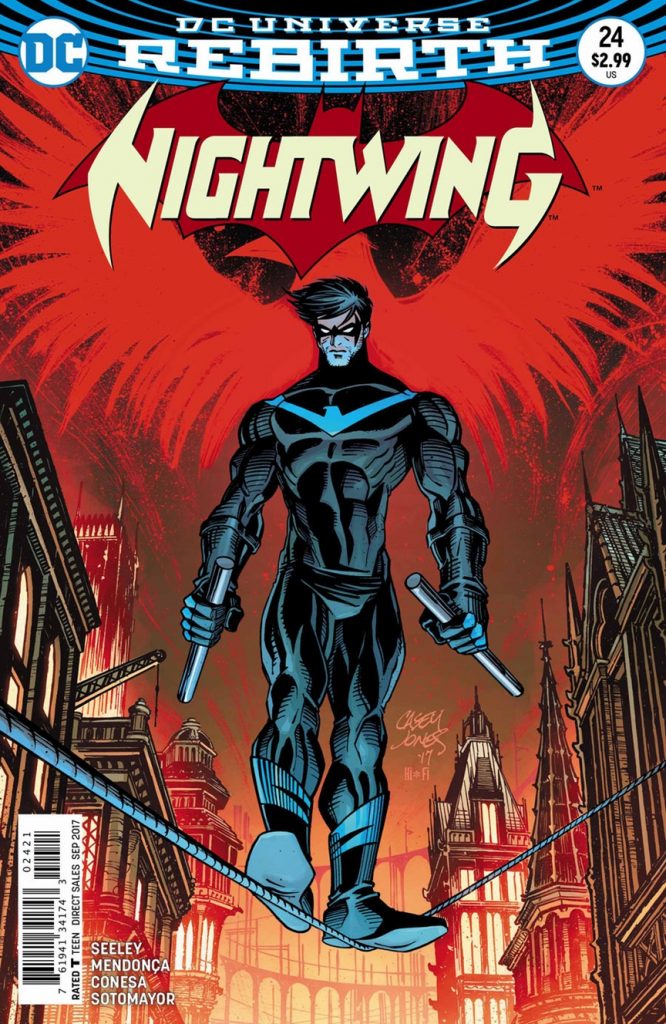