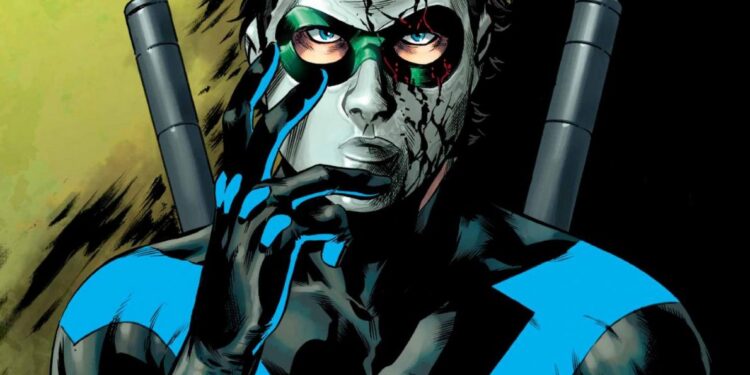 Seems like forever since Nightwing battled Raptor. It was a classic story, one for the ages – a true comeback and return to form after the horrid Grayson run in New 52. We review Nightwing #13. Since then, Dick Grayson has been trying to find himself in and, well, it hasn’t been a stellar story. Feeling more like something out of Arrow season five, it’s been dreadfully dull in Dick’s world, with incredibly weak supporting characters. That’s why Nightwing #13 surprises—it’s actually a decent tale in this never-ending “Blüdhaven” arc.

When the Run-Offs tell Nightwing they’re no heroes, he has to go at it alone and battle the city’s serial killer, who’s developed an obsession for the black-and-blue superhero. This is made all the harder by the city’s police force not taking too kindly to having the former Boy Wonder in their city.

Filled with action and serious sleuthing, this issue is reminiscent to Chuck Dixon’s iconic take on the character. It’s a throwback to the days when Dick went out on his own and was Blüdhaven’s Batman. Also, it helps that it’s a lot of fun and there’s a tremendous amount happening—surprisingly, we even discover the serial killer’s identity in this issue. There’s nothing worse than a book that holds back absolutely everything for the finale, and the story drags on like the workweek that never ends. Kudos to Tim Seeley for upping the stakes and bringing more action to the series. On the art front, Marcus To illustrates another good issue. “Blüdhaven” might’ve been weak up till now, but no one can fault To’s work on this arc. His style is unique and brings a new flavour to the series we haven’t seen before—although, I do wish he’d designed Dick to look more like a man and less like a boy. Hopefully, he gets a chance on another arc to illustrate some bigger villains than the likes of Orca.

Overall, Nightwing #13 is a step in the right direction for the series. While not as gripping as the epic before it, it’s at least rectifying the mistakes it’s made. Personally, I’d like to see a stronger villain introduced in the next arc—a legitimate threat for Nightwing to battle.