I wasn’t expecting NieR: Automata to be as good as it was. Perhaps it was my low expectations that helped make it my sleeper hit of the past year, but all I know is that this is a damn fine game. From the shadows beyond the stars, an unknown alien threat came to earth to start a war which pushed humanity to the brink of extinction, thanks to their merciless robotic army. The humans couldn’t fight back and seeing nothing but defeat on the horizon, they fled to the Moon in one last ditch effort to survive, where to this day they live.

But ain’t nobody gonna mess with their planet, because humanity eventually fights back by creating giant robots known as Jaegers humanoid androids (known as YoRHa Units) with a penchant for dressing like gothic Lolitas and big-ass weapons in order to take the fight back to the robots on earth and cancel the apocalypse… >cough<

In NieR: Automata, you’ll take the role of 2B, an android cooler than cool (ice cold) as she is tasked with – okay, here’s the thing: NieR: Automata has 26 different endings and to sum the story up without spoilers is especially hard here. Your first playthrough, you’ll experience Automata through 2B’s eyes, as she helps the Resistance stationed on earth, delve deeper into the machine threat and discover some truly startling revelations about not only the robots but YoRHa and the androids as well.

The second playthrough, you’ll be in the shoes of a new character, and the storyline is the same, but you’ll experience parts of the story from another perspective and learn even more about the world of Automata. The third and fourth time, even more pieces of the puzzle fall into place and believe me, this is a story you want to experience in full.

NieR’s story is a truly odd, but a solid one and the fact that it refreshed its perspective with each new playthrough had me restarting the game right after I hit the end just so I can dive deeper down this intriguing rabbit hole. Even if you find yourself disconnected from the main story, the side missions have utterly enchanting and diverse characters that’ll hit your feels with an up, up, down, down, left, right, B, A. Get it? Automatics are easier to drive – you get it? It’s a pun, you guys. I’m super proud of myself on that – anyway. NieR: Automata is a mixed bag when it comes to gameplay but in a good way. At its core, it’s a hack-n-slash, with 2B having numerous, upgradable weapons (from daggers to swords to lances to spears – which ALL have their own little story), and you can combine those with your as upgradable POD, which is a floating robotic assistant thing that doubles as your ranged weapon (which also has special charge attacks like lasers, shields and, energy hammers to name a few). Combat is simple, but oh so much fun and once you get into the groove of it, you’ll find yourself a murder machine in perpetual chaotic motion as you slice and slide your way through enemies.

But then, you also get the flying shooter sections where you’ll find yourself in flight rigs, usually in a top-down or side-view, as you go old school arcade style, dodging enemies and their comically large red projectiles, all while using your own weaponry, complete with special kaleidoscope-like super attacks. This harkens back to the TV Game days and these are always a delight because they’re never drawn-out nor do they feel forced.

On your 2nd playthrough, you’ll lose a weapon, but gain the ability to hack, which is in itself a challenging shooter-styled mini-game, and that allows you to destroy, turn enemies against another or even remote control them. The bigger the enemy, the tougher the hack and this adds a whole new level of gameplay, forcing you to change your style and Chip Sets to compensate for your new abilities. “Chip Sets”? Yes, Chip Sets. You can upgrade yourself via Chip Sets, which allows for simple things like improved health and defence, but also, far more interesting effects like freezing time after a perfect counter, turning invincible after being hit, auto-healing and much more. You have 3 different sets you can customise to your liking and switch on the fly, and this can dramatically alter your play style.

In-between butchering robots, you’ll be doing a mix of exploring and platforming in the large sandbox world, with tonnes of resources to find to help you upgrade your weapons. At first, you’ll find this tiring, but you’ll unlock fast travel and the more fun option, the ability to ride (and drift, baba, drift) animals to help you get around faster. But even if you opt to go by foot, the large sandbox world is big, but not overwhelming in any way and it’s simple to get from one point to another. Automata almost looks like an oil painted storybook brought to life, and its design aesthetic is a unique one, with the juxtaposition between areas, especially the moon base, where everything is colourless, clean and futuristic – and, earth, where the ruined remnants of humanity are being reclaimed by nature.

But the game is a sneaky little bee because it uses a lot of odd camera angles, switching from side view to top down to the cheap seats’ view (as in waaay zoomed out), and because of this, you always notice and are enamoured by the gorgeous environments as a whole, rather than individual elements.

Take Horizon Zero Dawn, for instance (you can read Deville’s excellent review here – Deville, link it, bro – link it uuuuup), character models were painstakingly detailed and demanded your attention – but here, it’s about the world and not the characters in it. Hell, some NPCs look like they’re remastered HD PS2 characters (I’m looking at you, Camp Weaponsmith) and robots are comical in their design, but then the main characters have that AAA polish and detailing – and as you play, you’ll see that is a theme throughout the game: the juxtaposition. NieR: Automata might not impress you with its level of detail, but it will do so with its striking, beautifully unique style.

The game’s soundtrack is obscenely good. Each area has its own theme and every single song in this game is >censored< amazing. There’s little more to say about this, but Automata has one of the best gaming scores I’ve ever heard and the way it not only compliments but elevates the game is something to behold and uhm, be… hear? If that’s… a word?

Whether it’s strolling through an unexpected peaceful village or battling an unexpected boss, the music essentially does to the game what the Fire Flower does to Mario: brings that supah hot fyah, son. The music is hella lit, fa — After being beaten by the entire Fortress staff for using the word, “lit,” Lyle returned from his beating 2 weeks later, recovered enough to finish this long-ass review.

NieR: Automata‘s simple, yet frantic combat makes it a joy to play; its odd story is fascinating to the point that it demands multiple playthroughs and, its varied gameplay elements makes those playthroughs dynamic enough to prevent immediate burnout – not to mention the beautiful world Platinum have crafted or the game’s utterly divine soundtrack. Simply put, NieR: Automata is an exceptionally well-crafted game well worth your time and gold. Or whatever currency is relevant to you. 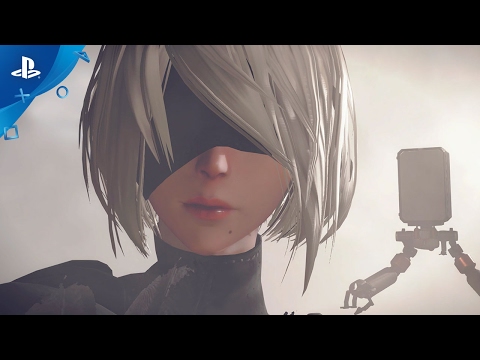