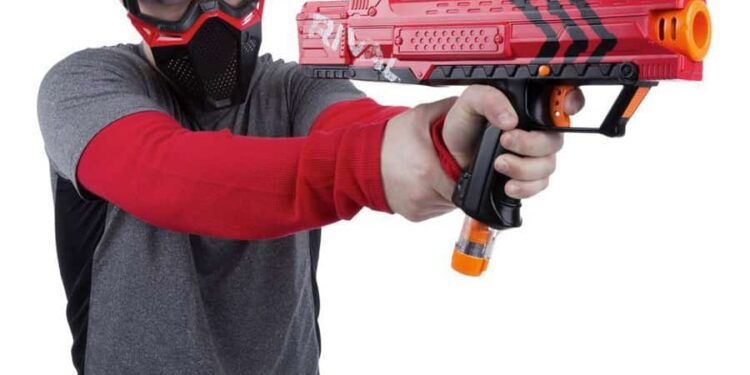 Over the years, the Nerf range of blasters have gained quite a following, with many becoming obsessed with collecting each and every one of these foam launching WMFs (weapons of massive fun). I’ve become quite a fan myself and was very excited when I was told that I would get the opportunity to review one of the blasters in the Rival range, the Apollo XV-700. 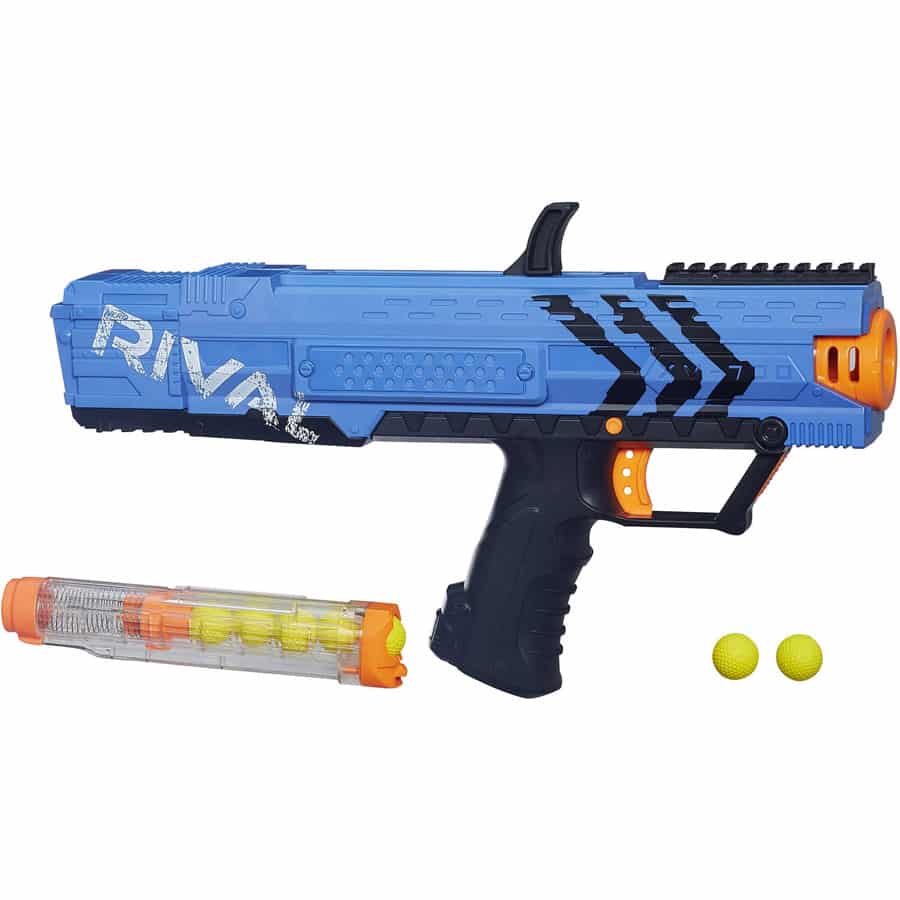 For those who don’t know, the Rival range is the newest range of Nerf blasters and a bit of a departure from some of the previous ranges, mainly due to the new type of ammo it uses. Most blasters use foam darts as ammo. These darts have been re-engineered over the years, making them more aerodynamic. While they do work surprisingly well, they’re not always as accurate as many would like. Enter the new Nerf Rival range.

These new and improved blasters throw out these iconic foam darts and instead replace them with new dimpled foam balls.

The first thing you might ask is why the dimples on the foam balls? Well, just as with golf balls, these dimples act as stabilizers and makes them travel better though and stay straight for longer, making your shots more accurate. I was at first sceptical, especially since I have many fond memories of being shot (by my kids) with the classic foam darts. But, after firing the new foam balls, my scepticism quickly disappeared.

The Apollo XV-700 Rival blaster is the entry-level blaster in the Rival range. Don’t let that moniker fool you as this blaster is still one of the most powerful and accurate Nerf blasters I’ve had the opportunity to review.

It comes with a seven round magazine, along with seven foam balls. You can also buy extended magazines for the Apollo XV-700 that takes twelve foam balls, which means more foamy death for your opponents. While you do get semi-automatic motorised blasters in the Rival range, the Apollo, being an entry-level blaster, is a single shot blaster. But as they say, it’s not how fast you can shoot but how accurate you are. Luckily, the Apollo, as with the rest of the range, is surprisingly accurate. As with previous Nerf blasters, the Apollo uses a hand primer to prime the blaster. In this case, it is situated at the top of the blaster and needs to be pulled, pushed forward and then back in order to prime the blaster. I have to say that the process isn’t as smooth as I would’ve hoped and does take a bit of muscle, which means that a smaller child might need some adult assistance.

The blaster also has the obligatory safety switch which will make sure that no one is struck by a foam ball by accident.

It does have a tactical rail on top, but it looks different from the one found on other Nerf blasters, which could mean that your older attachments might not necessarily fit on it. Lastly, there is a small little lever to help sort out any jams that might happen due to an unruly foam ball.

While the Apollo XV-700 looks quite futuristic (in a space marine kind of way), its design does offer up some issues. As mentioned, the priming lever is on top of the blaster. This, coupled with the fact that the oversized grip is situated at the very front of the blaster, makes it feel unbalanced when priming. It’s not a big issue but it does take what is, in essence, a one-handed blaster and makes it one that needs both hands to be primed.

I would’ve preferred if the primer was situated on the side as this might have worked better. The fact that the priming lever is situated on the top makes aiming with the Apollo XV-700 a bit of a challenge (even if it is highly accurate for a foam blaster). You’d be better off shooting from the hip.

As far as range goes, the blaster surprised me yet again as it reached very respectable distances for an entry level blaster.

Besides these little niggling issues, the Apollo XV-700 is probably the best entry-level Nerf blaster you can get. It is surprisingly powerful, accurate and even looks really good. Moving the Rival range from foam darts to balls was a really smart move as it really helps improve both power and accuracy. If you are looking to get into Nerf blaster collecting or just want to add another great entry level blaster to your bludgeoning collection, then this would be the perfect blaster.

With the festive season quickly approaching, this would make a great gift for that special Nerf-acholic in your life. On a side note, for those worried about injuries while playing with this new range of powerful blasters, Hasbro has you covered. They have also released the Rival protective face masks to make sure that no stray foam bullet gets in the way of having fun with your Nerf Rival Apollo XV-700.

The Nerf Rival Apollo XV-700 is probably the best entry-level Nerf blaster you can get. It is surprisingly powerful, accurate and even looks really good.