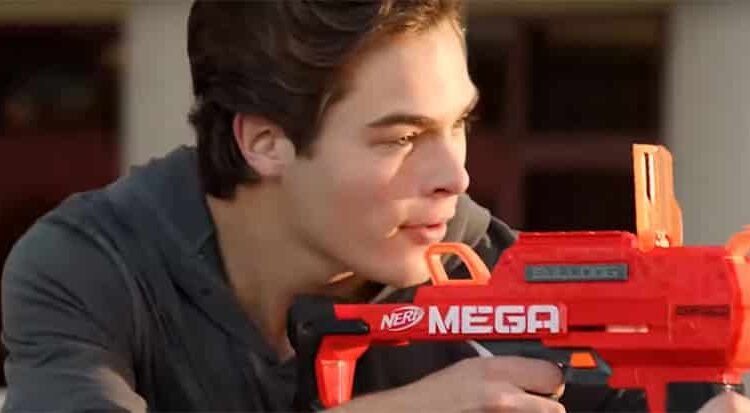 Over the past year, Fortress of Solitude has been fortunate enough to review a few Nerf blasters, from the basic but accurate Accustrike FalconFire to the fast shooting Nerf Rival Apollo XV-700. Each Nerf blaster we reviewed had something unique to it that made it stand out in the sea of so many other blasters on the market. But although we’ve had loads fun reviewing these Nerf blasters, we have never been able to get our hands on some of the larger blasters the Nerf range has to offer. Until now. Meet the Nerf Mega Bulldog. 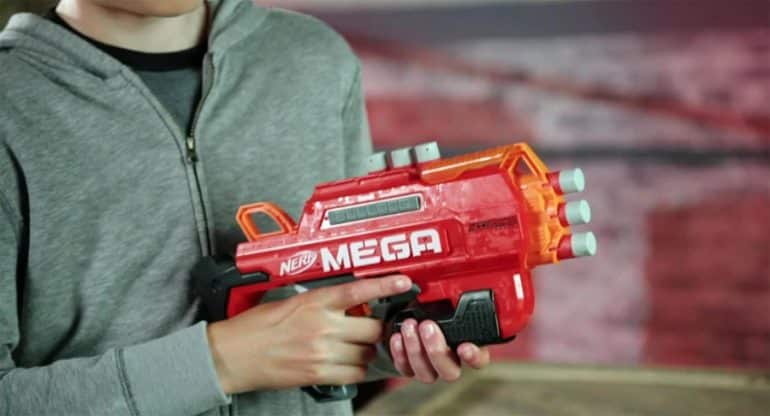 The Mega range of Nerf blasters have always been associated with leaving a heavy ‘thud’ in their wake as their overly large darts make quite a first impression on unsuspecting rivals. Granted, when the Nerf blaster arrived on my doorstep, I was surprised at how compact it seemed, especially since it fires the much larger Mega Accustrike darts. The Nerf Mega Bulldog, however, is surprisingly compact, no thanks in part, to one unique feature.

When initially removing the Nerf Mega Bulldog blaster from its packaging, the first thing one notices is just how cool the blaster looks. Unlike some of the other Nerf blaster ranges, the Nerf Mega range is unapologetically bombastic in the way it looks. It’s bulky and chunky, but in a good futuristic sort of way, with the model and range names boldly emblazoned on it. There is some subtlety to the blaster’s design, which I do appreciate, such as the pixelated camo texture on the body of the blaster and the embossed “M” motif on the grips and stock. It’s a small touch but helps add even more personality to the blaster. 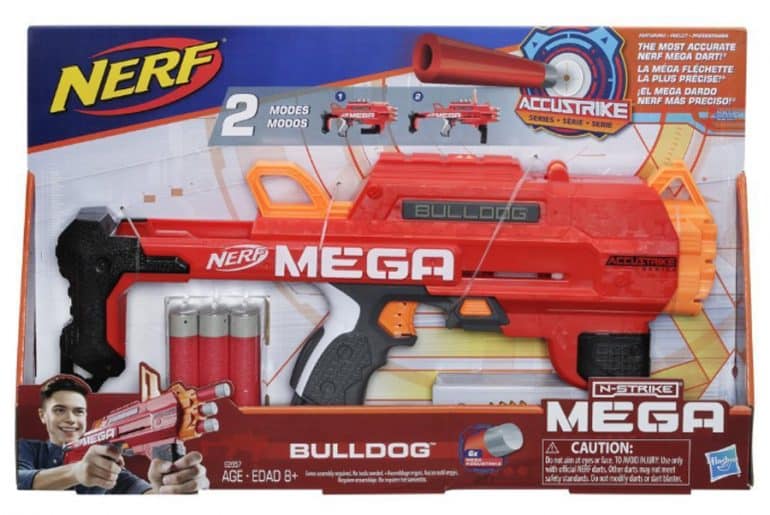 Looks aside, what makes this specific blaster stand out from the rest of the range? Well, as I have already commented, the Nerf Mega Bulldog has one unique feature to give Nerf fans the edge on the battlefield, and that is the ability to seamlessly transform from a blaster with a single grip to a blaster with an extra foregrip and an extended stock. It’s an interesting feature that in theory should make the blaster more accurate and stable when transformed. The thing is that, while it does work to an extent, the problem is when someone with larger hands tries to use both grips. It just feels awkward. The same goes for the extending stock that works perfectly for a younger kid but is far too short for older kids (or those Nerf-loving adults like me). This doesn’t mean that adults or older kids shouldn’t add this unique blaster to their collection. It’s just something to take note of.

The impressive part about this feature is how seamlessly it transforms. While chasing my kids through the house, I was able to change from double grip mode to single in a heartbeat, without it affecting how quickly I could get the darts to leave the barrel. The addition of the extra ladder sight, that flips up when switching to double grip mode, does help with the accuracy quite a lot. When it came time for the kids to try and blast their dad with foam darts, their accuracy increased every time I saw the little sight pop-up. Now, while this transformation does happen seamlessly, it does feel like the mechanism could get damaged if too much force is used by an overeager adult. Once again, this is something to be aware of.

As for actually getting those Accustrike darts to fly, loading the blaster is quite easy. The Nerf Mega Bulldog blaster can be loaded with up to three darts. At the back of the blaster is an orange lever, which when pulled primes the blaster. Although being able to load three darts into the blaster is really awesome, you do need to prime it before each shot, which does slow down the rate of fire a bit. As an added bonus, the blaster also comes with a little clip which clicks unto the side to store those extra darts. 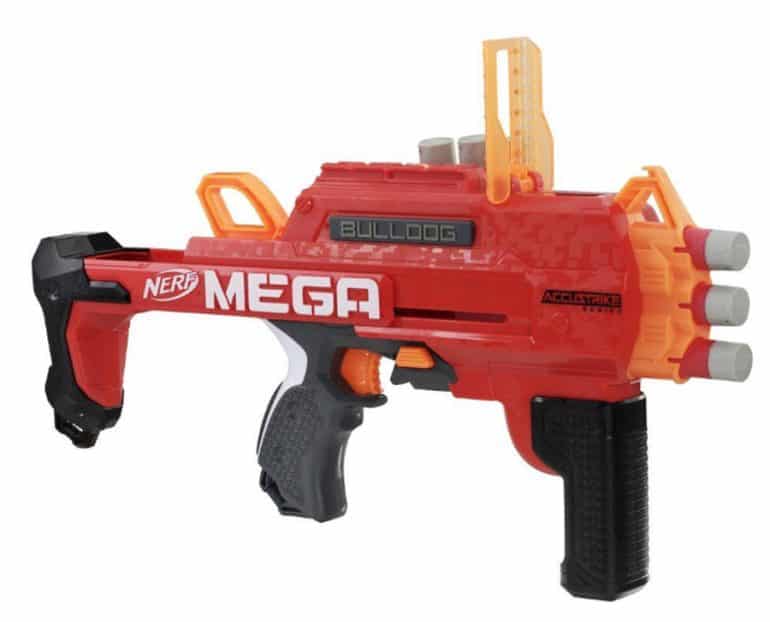 There is no denying that the Nerf Mega Bulldog blaster relies heavily on its transformation gimmick. It does work well and looks cool but doesn’t add that much to the blaster’s performance, although that little ladder sight sure made my kids hit me more often than not. It’s a solidly built blaster that feels sturdy and is great for showing off the increased accuracy of the Mega Accustrike darts. As someone with larger hands, I do wish that the grips where further apart and that the stock was a tad longer. However, other than that, the Nerf Mega Bulldog is a competent, entry-level blaster in the Mega range and will make a worthy addition to any Nerf blaster collection and a great gift for any kid trying to get their collection going.

Now, if you’ll excuse me, I have to go and nurse my wounds (and ego) after being decimated by my daughters.

What it lacks in performance the Nerf Mega Bulldog blaster makes up for with style. A great entry-level blaster in the Nerf Mega range.