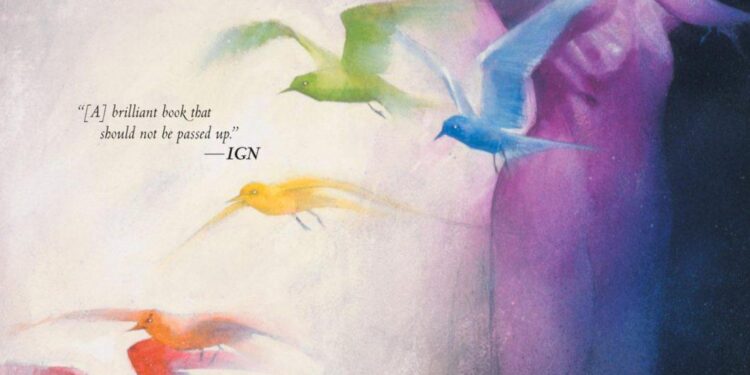 It’s a short story that lingers with you long after you’re finished reading it, much like the effects of Poison Ivy herself. The average comic book shop is usually a treasure trove for fans and collectors. There are statues and models on display, posters advertising the latest events in comic titles like they were blockbuster movies, rows of the latest comics, and row after row of back issues. The area that gets the most attention is the trade paperback section. These are the shelves where collected editions are found, the best of the best stories that comic books have to offer. The hottest items are usually written and drawn by the real superstars of the industry, from Alan Moore to Alex Ross… and then there’s a shelf that’s dedicated to one series alone: Neil Gaiman’s Sandman.

It makes sense. It’s an amazing series, ground-breaking in its day and still as powerful as ever. It helped make Neil Gaiman one of the most important voices in the field of fantasy literature. He’s a comic book writer and a novelist, and he’s written for both the big and small screen. From Stardust to Coraline, he’s made an impact. While Neverwhere may not have picked up the following it deserved, his episodes of Babylon 5 and Doctor Who have become fan favourites. Add to that an online following of over 2 million fans, and it’s fair to say he’s pretty popular. But you’ll still find his best work in comic book shops.

There’s another section in comic book shops too, and they’re the bargain bins. You know the ones. You can get a stack of back issues (granted, they’re not always the best but they can be pretty good) for the price of a burger meal at a fast food place. If you’re on a tight budget, it’s always worth looking through them so don’t be a snob. It can be the comic book equivalent of The Antiques Roadshow. There’s a lot of junk in there, comics that never caught on… but sometimes you’ll find a hidden treasure.

That’s where I found mine. I found Neil Gaiman’s Poison Ivy and got it for five bucks.

Think about it: convert that price into US dollars and it’s not even 50 cents. Okay, so it’s not a hardback volume, nor does it have a glossy cover. It didn’t even have a polybag or backing board. It’s not as famous as Gaiman’s Sandman, and in fact, there are probably plenty of his fans who have never even heard of it even though it’s been reprinted. Also, I have to confess, it’s not even a full comic. It was one of the several stories in an issue of DC’s Secret Origins, volume 2 #36 to be precise. While Poison Ivy may have shared the cover with Green Lantern Hal Jordan, it was her origin story written by Neil Gaiman and drawn by Mark Buckingham that took centre stage.

Poison Ivy is a character that most fans are familiar with when it comes to her look and her abilities, yet her back story is one of the lesser-told origins out there. Fittingly, the story is about an inspector who interviews her during her stay at Belle Reve prison to find out about her past. Her tale is a tragic one, where we learn that she was a lonely child who became a lonely adult who became romantically obsessed with Batman. The inspector in turn slowly becomes obsessed with Ivy, as much from curiosity as from the seductive effects of her powers. It’s one of the best-written – and sadly overlooked – tales that you’ll find. The art is fantastic too, even if the old paper quality doesn’t do justice to it. And while it’s a shame that something this good was relegated to the murky depths between some old ‘80s Justice Leagues and What Ifs, it’s a genuine treasure. I don’t know if you’ll be able to find it, but it’s well worth the effort of looking for it. But then there are lots of hidden gems there.

So the next time you’re at the comic book shop, maybe take a few minutes to check out the old bargain bins. You never know what you may find.